Bits of offal that I find delicious! 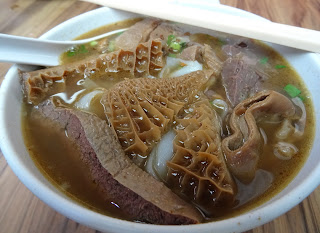 A delicious bowl of beef offal and rice noodle soup ;b 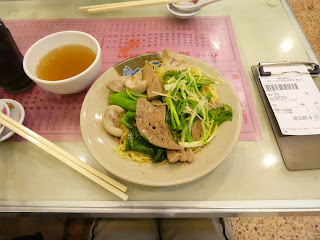 A yummy plate of egg noodles topped with
pig's liver, kidneys, and two kinds of vegetables :b

"Try it first, then I'll tell you what it is."  That's what I remember my mother telling me quite a bit when I was a child.  In retrospect, I realize that it wasn't so much that she was tricking me into eating such as various kinds of offal or exotic foods such as sea cucumber, harsmar and the item euphemestically known as bird's nest as she was teaching me that, when you approach such things without prejudice, you might find that they can actually taste good!


Growing up in Penang, I actually came to consider pig's kidneys (particularly those served up at my favorite noodle and congee shop over in Perak Lane) and chicken giblets (despite my actually having no idea what part of the animal they actually were) as special treats the way that some other children might think of Gummy bears and Creme Eggs.  And I think I can safely say that over the course of my Malaysian childhood, I was introduced to far more different kinds of food (and edible animal parts) than many other kids living in other parts of the world.


At the same time, it took living in Tanzania to give me an appreciation for liver, which Tanzanians consider to be a more prestigious food item than regular meat (though less so than nundu (cow hump that seems to be pure fat and thus even worse for you than bacon!)).  In all honesty, I found liver just about edible -- but no great shakes in the taste category -- before my two year stint in that East African country but got my opinion changed so much after being served it so often there that these days, I actually go out of my way to order and eat it, including at one of my favorite eateries in Sham Shui Po and also whenever I go for yakitori, be it in Hong Kong or Japan.


As I think it can be easily imagined, the Land of the Rising Sun (and shirako, fugu and sushi) is a country where I've not only tried a whole bunch of foods for the first time but also have grown to passionately love quite a number of previously unfamiliar delicacies.  Among these is chicken "tail" (or, less euphemistically, butt), which I never fail to order if I find it on a yakitori-ya's menu.


Disappointingly, this isn't often in yakitori-ya in Hong Kong (even ones that supposedly specialize in nose-to-tail cooking like Yardbird).  On the other hand, yakitori-ya in Japan sometimes don't only serve chicken ass but distinguish between -- and offer up both -- the male butt (bonjiri) and female (misaki), with the owner of the internationally-renowned Toritama chain (who I've had the good fortune to dine together and chat with twice; once at Sake Bar Ginn and another time at Uehara!) telling me that he considered misaki to bonjiri!

Meanwhile, if I had to name a food item that I've come to appreciate far more after moving to Hong Kong: cow's stomach would probably be it.  And like the Japanese do with chicken butt, Hong Kongers distinguish between different cow's stomachs: with the omasum being considered more of a treat than the other sections, which can be found making up part of offal snacks sold at casual outlets as well as are usually included in a general bowl of offal and noodles in soup at various beef noodle specialists around town! ;b
Posted by YTSL at 11:59 PM