How beautiful -- and green -- is Hong Kong on a high visibility summer's day! (Photo-essay)

Sometimes, when you gotta go, you just gotta go...!  More specifically: one summer's day, despite the temperature being on the high side and my having a cold, I was tempted by the super high visibility to go out hiking on Hong Kong Island.  Having told a friend that I'd be opting for an easy hike, she was persuaded to go with me on the circular Peak walk, but also up High West and then down to the Mid-Levels because, well, the beautiful weather was calling me to go do so!

Although my friend struggled a bit with the many steps leading up to High West, I do think that she understood why I think the uphill climb is so very much worth it once she saw the 360 degree views that one gets from up there.  And although she was amused by my constantly being on the look out for interesting critters, I think she too got pretty excited by the critter spottings we were able to make along the way... ;b 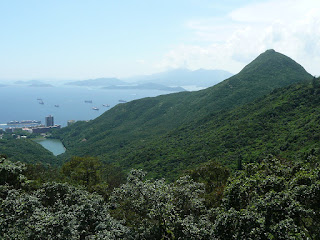 Shortly after getting off the bus that got us up to
Victoria Gap, we were privy to this view that took in
High West along with the Pok Fu Lam Reservoir 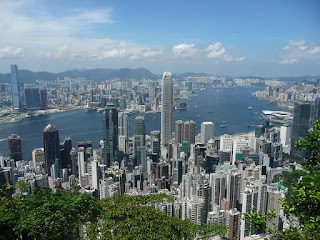 I've seen this view (looking across Victoria Harbour to Kowloon
and also to the eastern section of Hong Kong Island) many times --
but still, it's one that mesmerizes, especially on high visibility days ;b 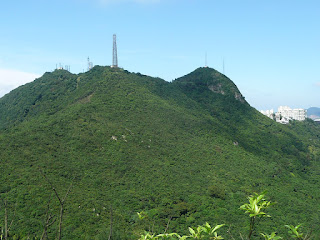 This is the real Victoria Peak -- as opposed to Victoria Gap,
which many tourists mistake for The Peak! 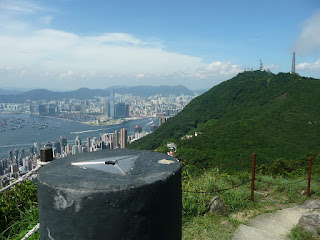 Yes, at 494 meters high, High West is more than 50 meters shorter
than Victoria Peak -- but one still can get splendid views from there
and unlike the latter, one can get up to its very top! 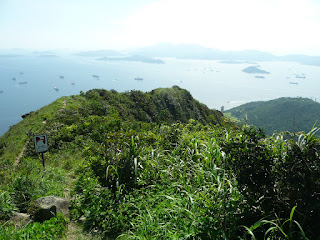 Yes, there's more than one way up High West -- but
some are more challenging to go up than others! :O 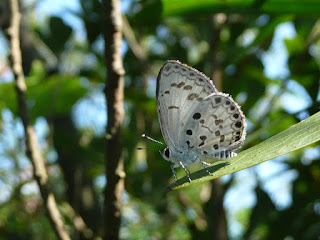 One of the smaller -- and more beautiful -- of a number
of butterflies that I spotted on this hike :) 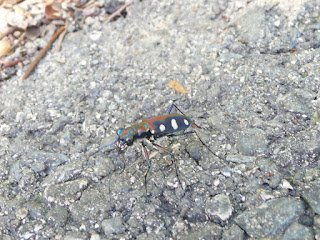 The shiny bits of the tiger beetle are particularly noticeable
when they are moving at speed! :b 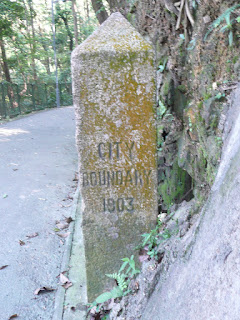 One of six (or is it seven?) historic boundary stones for
the City of Victoria  -- this one located on the road
leading down to the Mid-Levels from the Peak
Posted by YTSL at 11:56 PM

Have you ever used this site: http://www2.map.gov.hk/gih3/view/index.jsp If not, pleaae give it a try. The map search there would show most of the footpaths around the hills in town. If you zoom into High West you should be able to see all known paths leading up and down its summit.

The foot path shown in your photo wasn't exactly too dangerous despite there is a cliff on its western side. But it's lower end is treacherous. It disappears into a retention wall built after sort of a slide many years ago down at the end of Hatton Road. If you go down that way you might have difficulties going through thick overgrown to find an exit, or risk tumbling down the retention wall for a drop at least 3 metres.

By following the contour lines you should also be able to identify cliffs and ridges.

Didn't know about the site -- thanks for letting me know about it. But, actually, I'm a big supporter of the Hong Kong Countryside Maps. Yes, they can go out of date but I like real maps (rather than just ones that are on a screen)! ;b

I think I'm more of a scaredy cat than you... frankly, the thought of standing beyond the "road closed" sign up on High West is already quite freaky to me. Maybe I have too wild an imagination but I fear getting blown off the cliff -- or just plain losing my footing and slipping and falling over the side!

To be frank I do not like heights myself.

If I go hiking, I always have a full set of slightly outdated Country Park maps with me. But these days, I would need reading glasses to read details on the maps.

Anyway, there is a use for the GeoInfo maps. It would show graves as well as ruins not usually available in Country Park maps. The site is very good for research if you want to look into a certain area. Oh, and those odd paths too. Best if you have a big monitor. You may print the section you view and bring it along as supplements to the Country Park maps, BTW.

It is always a pleasure to read your Hong Kong Island hiking entries. The clear view of the skyline confirms that this must have been a near-perfect day. I especially like the fifth photo from the top. High West looks like an essential trek - and so close to the bustling streets below and with good views of the ships in the harbour...I bookmarked your July 2012 entry, "From Mount Parker Road up to Siu Shan (and Beyond)" because it is one of my favorite entries of yours. That top photo of the interesting little shrine (Guan Yin?) on the trail, really enchants me. I wonder if it is still there.

In something totally unrelated to this, I came across some news which might be of interest to you. The Hurtigruten's line of chefs has released a cookbook, "Norway's Coastal Kitchen", a collection of recipes. It is available in English and is the first Norwegian cookbook that has been translated into Chinese!

Well, my spectacles have multi-focal lenses... hence my being able to read the countryside maps okay! And good point re my being able to print out stuff on websites. (I've only recently got a printer for my home, having got out for a time of the habit of printing stuff out to read!) ;b

The day on which I took the photos for this blog post was pretty perfect visibilty wise. If only it had been somewhat cooler, than it'd have been perfect... ;b

Thanks as ever for clicking onto my links. Re the "From Ount Parker Road up to Siu Ma Shan (and Beyond)" entry: the last time I passed by that shrine was about a year ago -- and it was still there!

Thanks too for the info re the Hurtigruten cookbook. Have to say that I generally am far happier to leave the cooking to others though. Also, I would imagine that some of the ingredients are not all that easy to come by over here in Hong Kong! ;b