What people get up to at the Sai Wan Swimming Shed 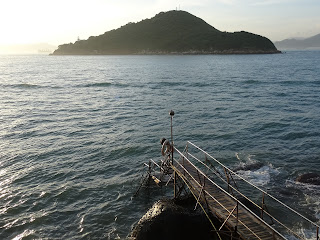 If I told you that the waters in the above picture belong to
Victoria Harbour, would you go swim there? 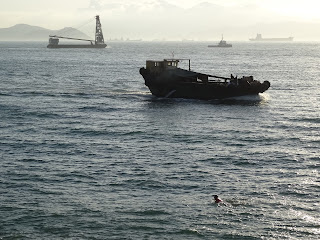 Believe it or not, there are some brave souls who think nothing
of going for a dip in that area, complete with boats passing by and all! 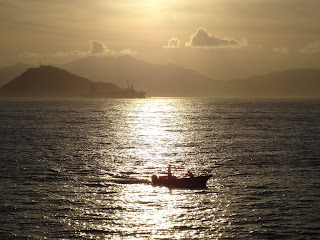 I, on the other hand, am perfectly content to stay dry
and just admire the view, especially near sunset :)
Ever since I read about and saw photos of the Sai Wan Swimming Shed's wooden pier, I've wanted to go and check it out.  Mind you, it wasn't as though I was looking for a swimming spot but I figured that it'd offer up some cool pictures, especially in the hours leading up to sunset, a la the areas I found out about on my May trip to Japan by Matsue's Lake Shinji; this especially since I've not only seen some beautiful colors in the sky and water when I passed by the northwestern section of Hong Kong Island on a ferry at this time of the day but also lots of photographers standing on the banks of Victoria Harbour with their cameras trained out to the water.
Somewhere along the line, it also dawned on me that this was where the Sulphur Channel swimmers who Jason Wordie wrote about in his Streets: Exploring Hong Kong Island jump into the water to get their exercise!  And while it's often commented that these days, one is more likely to encounter camera buffs than actual swimmers in this area, I did actually spot an intrepid fellow practicing his strokes in the waters several meters away from the Sai Wan Swimming Shed's wooden pier!

While some people might think him a bit weird for daring to swim in Victoria Harbour (a body of water that is not exactly the cleanest out there, due in no small part to it being one of the world's busiest ports), swimmers like him probably would reckon that the photographers jogging for space in the area, especially during magic hour, have a few screws loose themselves!  In addition, there are those who go and pretend to be jumping into the water or carry out other antics on the rickety pier for others to take photos of them -- and I must admit that I, who preferred to focus on the scenery when taking my photos, found their presence alternately amusing and annoying!

While waiting for the sun to go down, some movement close to the water caught my attention.  The first time, I didn't quite catch what I saw -- but eventually, I got to realizing that there were big fish leaping in and out of the water (or, maybe just the one continually doing it over and over again), for reasons that I can't quite fathom!

A few weeks back, while on the ferry from Central to Mui Wo, I had spotted whole bunches of smaller fish leaping about in the water and had concluded that they were flying fish, like ones I've seen while riding a boat in the waters off Penang.  But the fish I saw this time around was quite a bit bigger than any flying fish I've seen before -- though, thankfully, nothing close to shark size nonetheless.
Yet, to judge from the lack of reaction from the other people around me, I was the only one who had spotted -- but, sadly, was unable to get a shot -- of it!  I guess it was a case of different strokes for different folks in terms of what we look for and notice, even when we're all assembled in the same area, at the same time! ;b
Posted by YTSL at 8:26 PM

Back in the old days, there had been quite a few of those Swimming Shads in the Harbour. A few in Kennedy Town area and another few in North Point, towards the present day location of the Cross Harbour Tunnel. A bit closer to King's Road, of course.

I believe there is another such spots near Wah Fu Estate where a small group of locals would go for a dip at will.

Believe it or not, someone actually did some research on this. You might like to take a look at this Chinese book: http://www.cp1897.com.hk/product_info.php?BookId=9789620434792

I think I've seen the swimming spot near Wah Fu Estate -- and close to the Waterfall Bay Park where there are (or, at least, were when I visited) lots of religious figurines. I've also seen what looks like regular swimmers paddling about in Siu Sai Wan, albeit in an area where I think the authorities would prefer that people don't swim.

In any case, thanks for the info -- though, alas, with the Chinese book, I won't be able to make use of the info since I can't read much Chinese at all. :S

I do not have the book, but I remember there are vintage photos in it. There are two other books (written in Chinese) talking about the coast line since the Brits took over. One for HK Island and the other Kowloon. There are also vintage photos in them. Worth a look if you are in book stores or in a library. (http://www.cp1897.com.hk/product_info.php?BookId=9789888290888 & http://www.cp1897.com.hk/product_info.php?BookId=9789888340873)

Other than the images provided the rest would be of your own imagination and realization.

Thanks for the recommendations. I think there's a lot more interest in -- and publications on -- Hong Kong local history out there than many folks realize... :)

A little update concerning one of those former swimming location at Kennedy Town Praya.

Thanks for the update. I am familiar with gwulo.com but really should visit there more often! :)