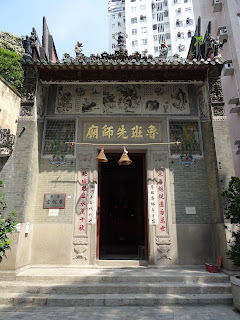 The Lo Pan Temple looks like nothing special
when viewed from the front... 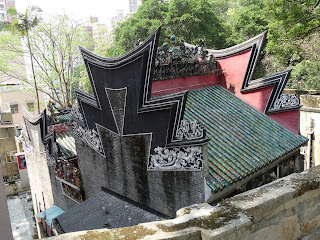 ...but its roof is definitely eyecatching when viewed
from a vantage point behind and above it! 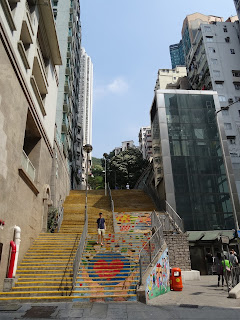 I also like how this lower section of
nearby Sands Street has been decorated :)

Ever since I saw photos of the Lo Pan Temple in Jason Wordie's Streets: Exploring Hong Kong Island, I'd put this Taoist temple dedicated to the God of Carpenters on my list of places to check out in the Big Lychee.  But it wasn't until a few months that I finally made my way to what can feel like an out of the way part of Hong Kong; one where an MTR station only opened late last year, and which still requires a bit of a hike up or down a ladder street to get to.
Built in the late 19th century, when Hong Kong was under British colonial rule, the Lo Pan Temple in Kennedy Town looks as un-British a building as it's possible to get! Apparently, its gabled walls are of a style known as the "Five Famous Mountains Paying Tribute to Heaven" that comes from China's Hunan Province.  What I know for sure is that it's very distinctive -- even among the Taoist temples to be found in what has remained a mainly Cantonese territority up to today.
Constructed by the Contractors' Guild and funded by donations from people in related trades, the two-hall structure's interior is less elaborately furnished than one might think it would be, and also darker than expected too.  Given a Grade I historic listing, it's one of the rare temples in Hong Kong which looks to have largely retained its original appearance and structure.
Since it was its roof that I most wanted to see, I approached the Lo Pan Temple from several meters above, wending my way downwards from Pok Fu Lam Road via quiet alley ways.  Even after having viewed photos of this Taoist of place of worship online as well as in Wordie's book, it still was really cool to see it with my own two eyes. Also when there, one is able to appreciate how surprisingly tranquil its surroundings are -- and I have to admit to thinking it'd be lovely to live on that small terrace street where the temple's located and which looks to be populated by long-term residents who treat it as a semi-private space.
On the other hand, I wouldn't fancy having to regularly go up and down the ladder street nearby, especially when laden with such as groceries, or luggage post overseas trip -- but that's something those living in the terrace street can't avoid doing!  And after seeing how seasonal downpours can turn Hong Kong's hill streams into overflowing waterfalls, I can easily imagine that these streets aren't ones that people will consider all that wonderful when the heavens open and pour lots of rain down, and thus was glad that the afternoon that I visited this picturesque part of Hong Kong was actually a dry and sunny one! :)
Posted by YTSL at 6:35 PM

You are right - that's a cool roof! I need to check this temple out too, thanks for sharing!

Thanks for reading and commenting -- and yes, do go check out the temple (and its surroundings) some time! :)

I took out my copy of Jason Wordie's book after reading this entry. His page on the Lo Pan Temple is enough to induce anyone to visit it. The angular design on the roofing has a kind of an Art Deco look, contrasted by the rest of the Chinese temple roof. I guess you could classify this as eclectic architecture. (I also thumbed through Wordie's companion volume on Kowloon. Why doesn't he also write a volume on the New Territories?)

Thanks for the link to templetrails.com. I bookmarked it and look forward to reading it.

I've been waiting for years for a New Territories volume by Jason Wordie too! Funny that he hasn't written one yet, considering that he lives in that part of Hong Kong!