Tai Tam Country Park panoramic view that takes in the likes of
Mount Butler, Mount Parker and three of the Tai Tam Reservoirs
(Please click on the photo to get an enlarged view) 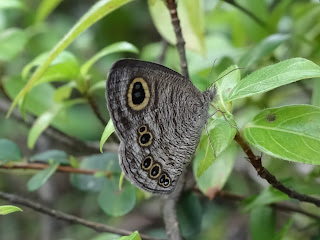 One of the many winged creatures I caught sight of
on the hike -- and it is a beauty, right? :b


The last few days have been rainy for at least parts of them.  And with thunderstorms included in today's weather prediction, even I -- who has gone out hiking in the rain on occasion -- elected to busy myself doing other things this Sunday.


One reason why I didn't mind not hiking so much today though was that I had actually ventured out into the wilds of Hong Kong earlier in the week.  The late afternoon excursion that took me from Wong Nai Chung Gap to Tai Tam Tuk Reservoir actually was on the short side and within the familiar environs of Tai Tam Country Park.  But it nonetheless managed to exhilarate and reinvigorate, as I encountered literally as well as metaphorically refreshing breezes during the trek!


Early on during this hike, I told myself that I'd like to venture up to a particular point in the country park which I remembered having a view compass and lovely panoramic views.  I had been there on one of my first hikes in the area but never since, and knew that it wasn't on the main trail leading from Wong Nai Chung Gap to the Tai Tam Reservoirs.  Instead, as I re-discovered on this hike, that panoramic point's located along the 1.6-kilometer-long Tai Tam Family Walk which I incorporated into that afternoon's hike route, and actually isn't all that scenic until the last 100 meters or so!

If truth be told, I actually prefer the view from a bit higher up the hill than where the view compass has been placed -- and that's where I elected to snap the photo at the top of this blog entry.  Funnily enough, this blog post's other photo also was taken close to that point.  And speaking of funny: Maybe it's just my imagination but it sometimes seems to me that butterflies (and moths) tend to flit more slowly and less on cooler days than super hot ones.  In any case, this particular little critter stayed still enough for me to get a much clearer shot of it than I thought I'd be able to -- and of course I'm very glad that this was so! :)
Posted by YTSL at 11:28 PM

Not quite the stereotypical view of Hong Kong!

And yet... would you believe that's what the central part of Hong Kong Island looks like? ;)