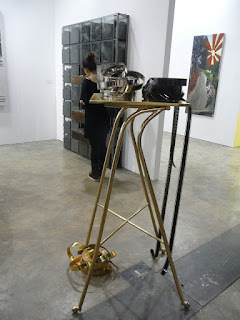 Reel gold, silver or just plain old --
they all can be considered art ;)
Laugh, Clown, Laugh (Hong Kong, 1960)
- Li Ping Qian, director
- Starring: Bao Fong, Shek Hwei, Kung Chiu Hsia
It may have the same English title as the 1928 silent film starring Lon Chaney but this 1960 Hong Kong drama -- which I reckon has stood the test of time quite a bit better than many other Hong Kong movies from this era -- possesses a different, arguably distinctly Chinese story: one involving a family patriarch feeling obliged to hide certain of his activities -- despite their being perfectly legal -- from his wife and young adult eldest offspring in a bid to save face as well as keep them from worrying after he loses his respectable job through no fault of his own.
Set in Japanese-occupied Tianjin (and with Mandarin language dialogue), Laugh, Clown, Laugh centres on a 50-year-old accountant (Bao Fong) with a love of comedy, sense of humor and tolerant attitude to acting and actors which appears lacking in both his wife (Kung Chiu Hsia) and elder daughter (Shek Hwei).  Produced by the leftist Great Wall company, the richly detailed movie's makers take every opportunity to show their anti-Japanese/occupier feelings and also disapproval against the socially prejudiced, who would do such as forbid their young children from playing with age-mates whose parents are in professions that aren't considered honorable and their adult children from marrying otherwise fine individuals because their parents' status is not high enough to suit them.
It's the last working day of the calendar year when this involving film begins, and the staff of a bank are looking forward to ringing in the new year with a feast and entertainment provided by the company.  That evening, the financial institution's senior accountant -- who's been with it for over 20 years -- and a colleague cheerily oblige, and prove pretty adept at making people laugh, when called upon to present a comedy act to the assembled audience comprised of the bank staff and their happily families.
Before Chinese New Year comes along a few weeks later though, the accountant will have been retrenched, told by his fellow Chinese manager that times are bad and the decision to cut some staff was made by the Japanese higher-ups (who, it is implied, had forcefully taken over the bank along with occupied this section of the country some time earlier).  Rather than break the bad news to his family though, he hides it from them: initially resolving to only tell them after Chinese New Year, so that they can at least enjoy the festivities first; but then pretending to go to work after the holidays rather than tell them the truth.
A generally honest man, he proves to not be very adept at keeping the truth from coming out though; this especially since inflation is high and he proves to have (had) very little saved for desperate times like these.  Although his elder daughter turns out to be more helpful than one would have expected (given that she came across as a shrewish chip of her mother's block early on in the movie), his wife turns out to be about as little help (she literally becomes sick from worry and due to their impoverished conditions!) as his two pre-teen children (who are prone to voice out loud how cold and hungry they are, rather than be stoic in the face of hardship).
After months of searching unsuccessfully for a job which would pay enough not only to feed his family but give them a respectable lifestyle (that includes paying for his academically able daughter to attend university), he finds one that does just that.  Cue a return to happiness for the family; except that, the film being much more of a drama than the comedy some have billed it as being, there's of course an emotional plot twist and revelation in store before Laugh, Clown, Laugh draws to an end.
Going into the screening of this film, I only was familiar with its lead actor -- and it really is Bao Fong's show.  Not only does he have by far the most minutes on screen, he really makes the movie by proving so very adept at dramatically portraying a caring family man whose comedy talents end up being put to good use.  (I particularly like how he was able to deliver didactic dialogue without coming across as irritatingly preachy and could appear funny without resorting to the wildly exaggerated displays that lesser actors are reduced to.)
Rather amusingly in view of the prejudices exhibited against actors by certain characters in this film, Bao Fong wasn't only a movie star who appeared in scores of films (and also directed and scripted a number too) but also was married to an actress (Liu Su).  In addition, among his offspring are actress Paw Hee Ching and cinematographer-director Peter Pau! (And yes, it's also quite funny to see how the same Chinese surname can be written as Bao, Paw and Pau -- including for members of the same family -- in Roman script!)
My rating for this film: 8.0
Posted by YTSL at 7:13 PM