Takashi Murakami artworks in a most unlikely place! 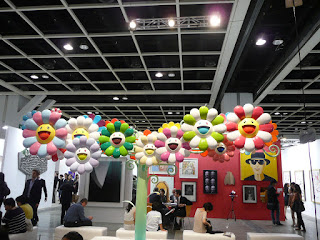 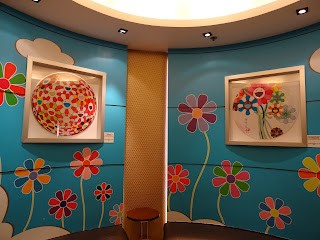 More of Murakami's smiley flowers -- this time spotted
near the entrance to toilets at a Hong Kong mall! :O


Takashi Murakami has been labelled the Japanese Andy Warhol for doing such as having no qualms about mixing high- and low-brow styles, pop culture and high Culture, commercial and fine art.  So it seems pretty appropriate that the first time I encountered his work was at the Louis Vuitton: A Passion for Creation special exhibition at the Hong Kong Museum of Art in 2009.


Since then, I've regularly seen the popular artist's works on show at the annual mega art fair initially known as Art HK but now known as Art Basel - Hong Kong (after being taken over by the Art Basel franchise).  In addition, a few years ago, I went to have a look at an exhibition of some more of his works (this one featuring skulls as well as flowers) at the Hong Kong branch of the Gagosian Gallery.

This evening, I caught sight of some more of the super prolific Murakami's works -- in what I consider to be such an unlikely place that I was moved to go and check to make sure that they were indeed original and actual works by the Japanese artist rather than ones by an imitator.  More specifically, on my way to the toilet at Elements (a mall that, granted, has been known to host art exhibitions), I caught sight of two of the Japanese artist's distinctive works hanging near the area set aside for people to sit for a bit while doing such as waiting for their friend(s) to finish using the nearby toilets!


While I know that there's a contemporary school of artistic thought that believes that art can be installed anywhere, I personally feel that there are better and more appropriate places to encounter and more greatly appreciate his works.  As it stands, I wonder how many people recognize that the Murakami works placed meters away from the toilets are works of art and/or works by him -- and also how many of those who do so take time to stop and take a good look at them when venturing into this section of the shopping mall?!

I'd additionally like to know for how long these works have been hanging in that space.  As it so happens, I've been to the mall quite a few times over the years -- but this was the first time I actually went to make use of the particular toilet which the Murakami works have been placed close to, and it thus was the first time this fan of his art knew about their presence in the mall! :O
Posted by YTSL at 11:59 PM