Very hot day(s), and blue but not so clean waters 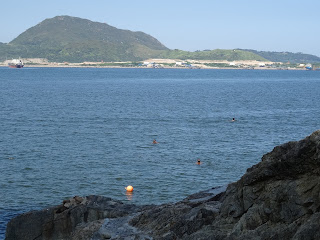 On a very hot day (like today), the blue waters
off Hong Kong prove very tempting for some 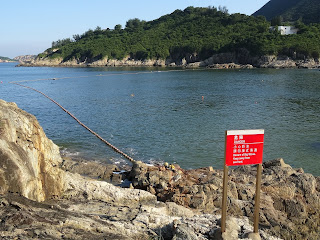 But a look at the garbage floating in the water
makes me never want to go for a swim in Hong Kong! 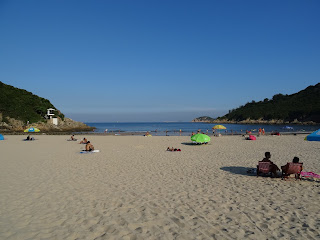 So I'm much more likely to be found just hanging out
on the beach (sometimes post hike! ;b)
Today is Liqiu, the first day of autumn (or fall, as the Americans tend to call it) according to the Chinese lunar calendar. Rather than the temperature dropping to herald the passing of summer, however, today turns out to actually have been the hottest day in Hong Kong since records started to be kept 130 years ago!
At around 5pm, a friend texted me to say that "According to the big digital thermometer outside the Chai Wan MTR (station), it's 38 degrees C(elsius)".  As it so happens, I was at an event this afternoon for which I felt obliged to dress more formally than usual -- in long sleeved shirt, long trousers, socks, dark clothing, and black leather shoes.  Upon returning home, I had felt uncommonly tired; something I initially ascribed to the function having been somewhat emotionally sapping.  But upon getting that text message from my friend, I realized that the heat had been a not insignificant factor in my feeling as drained as I did!
When the temperatures rise so high, it can seem like a swim in the sea would be the ideal thing to do.  But while Hong Kong's waters are generally a good deal clearer and bluer than the equivalent in Penang, I am reluctant to plunge into the sea -- or, perish the thought, Victoria Harbour! -- due to my too often having seen quite a bit of garbage floating about in them.
The situation is particularly bad the first three days or so after a rainstorm's hit the area due to increased polluted surface-water runoff.  And even on those days when the beach water quality isn't graded as "poor" or "very poor" (like on the day and at the venue that I took the second photo at the top of this blog post), there still can be so much rubbish visible in the water that I find myself wondering whether the people swimming about nearby hadn't spotted it or -- more scarily -- had decided that the pollution was at a degree they considered acceptable.
An American friend of mine told me of how she broke out in rashes the one time that she decided to go for a swim in Hong Kong waters.  And even while I know of people who've happily dived in to do such as go surfing in places like Hong Kong Island's Big Wave Bay and the Sai Kung Peninsula's Tai Long Wan, and emerged okay, I'm still not about to rush to join these folks.
Instead, you're more likely to find me doing such as taking part in beach-cleaning efforts.  Granted that it can be demoralizing to realize how little of a dent one person makes after hours of picking up all manner of trash (including bits of broken glass, lots of plastic bottles and -- this I did find shocking -- medical trash, such as plastic bottles of medicine and test tubes).  Still, I can't help thinking that if more people chipped in and, also, fewer people littered, there may come a (hot, sweltering) day when I'd actually decide it'd be cool to go for a dip in the clean waters off Hong Kong.
Posted by YTSL at 10:48 PM

Feeling exceptionally tired under high air temperature is the symptom of the beginning of a heat stroke.

I was in such a situation one July when I took up hiking again quite a few years ago. I was going up the zig-zag road toward Middle Gap Road (along Island Trail, I think) and had to take a long rest on my back on the spot, until my body temperature dropped back to a sort of normal range. That took around 45 minutes.

Since that time I always carry more water than I needed on my outings. That would mean at least 3 Litres for a short one, and maybe over 7 Litres for an all day hike.

There have been a couple of times while out hiking that I did worry that I was going to get heatstroke or heat exhaustion because it was so very hot out there and I felt so much heat on the top of my head (despite wearing a cap).

This tiredness was something different -- not least because I hadn't been out hiking, just walking on the street and being indoors otherwise. In any case, a two hour nap made me feel much better -- thank goodness!