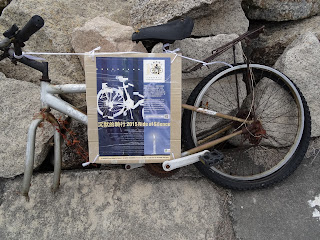 Perhaps one factor explaining how come To the Fore
doesn't have that many Hong Kong scenes despite having
a Hong Kong director and many other production crew members...


After viewing Wild City a few evenings ago, I got to chatting with a veteran Hong Kong filmmaker about Hong Kong action movies in general.  As it so happened, we were standing close to advertising for To the Fore.  Upon asking him if he had seen Dante Lam's latest, the industry insider let out a sigh and opined that it was quite a bit worse than Ringo Lam's film.

Before anything else: I recognize that To the Fore is on the formulaic side -- what with its primary story focusing on two young cyclists with sporting dreams of glory -- and also is hardly a perfect film.  In particular, the featured romantic triangle is not particularly involving, especially since it's pretty obvious almost from the start that the handsome, double-eyelidded Ming (Taiwanese-Canadian actor Eddie Peng) is going to win over gals like cute female cyclist Shiyao (Mainland Chinese actress Wang Luodan) at the expense of the likes of the plainer, single-eyelidded Tian (Chinese-Canadian actor Shawn Dou).  And this despite Ming's attempts at wooing women being on the cheesy side in addition to his having a troubled history with more than one women (starting from his mother).


Fortunately, Dante Lam and his co-scriptwriters (notably Silver Hau Wing Hang) -- like more than one Hong Kong filmmaker and scriptwriter before them -- are more adept at depicting male friendships on screen.  And I found the interactions between sometime comrades, sometime rivals Ming and Tian, and also the two of them and Korean cyclist Ji Won (South Korean actor Choi Si Won) -- whose domestiques  the two Taiwanese cyclists are initially hired to be -- to be believable and also compelling.  And ditto re the personality quirks that propel their particular professional trajectories and actions.

Even better still about this film which features lots of bicycle race scenes taking places in a variety of scenic locales -- including coastal circuits, ones that involve riding up mountains, and those taking place in desert settings -- is that it possesses thrilling action choreography (Jack Wong Wai Leung), awesome cinematography (by Parkie Chan Chor Keung), and bombastic but effectively pulsating accompanying musical score (by Henry Lai Wai Man).

A clearly ambitious work, To the Fore is largely set in Taiwan but also includes scenes taking place on mainland China, and in Hong Kong, South Korea and Europe.  A different kind of action film from what Hong Kong cinema is best known for (in that its battles take place among cyclists rather than martial artists or people on different sides of the law), it may well pave the way towards the popularization of a new genre of movie: one that is sufficiently clean cut to please the censors in territories like mainland China, Malaysia and Singapore, yet still be capable of delivering sufficient tension and excitement to entertain audiences in those territories and also Hong Kong.

I had high expectations for this film since it's from the director of Unbeatable. I saw it in Sydney the other day and was disappointed. The cycling scenes are nicely shot but the story is pretty ordinary. I think Unbeatable is a much better film.

Wild City will be showing in Sydney in a couple of weeks' time. I wonder if my lowered expectations (after reading your review) will make me like it more!

By the way, have you seen Monsters Hunt? The main character Wuba is no Ponyo, but it's still pretty cute!

I'm a sucker for sports films but my general feeling with them is that they generally are not the genre of movie to expect to encounter extraordinary storytelling. And of course "Unbeatable" is a better film than "To the Fore" but I consider this film to be a come-back to the form for Dante Lam after the disappointing "That Demon Within" last year.

Do let me know what you think of "Wild City" after you've seen it. As for "Monster Hunt": Wuba's been starring in those "no smoking, etc." announcements you get before movies start at Broadway Circuit cinemas -- and I have to admit to finding it too hideous to entertain the thought of watching a full-length feature film with it in it! ;(