Succumbing to the siren call of "Play Me, I'm Yours" at PMQ :) 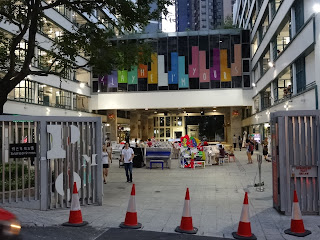 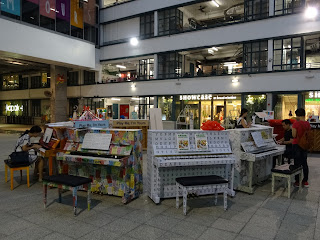 The pianos called out to be played, and some
people accepted the open invitation! :) 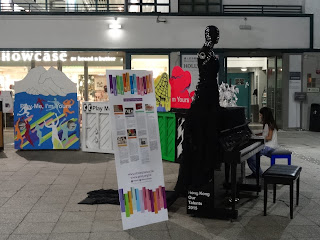 And to judge from the music they produced,
some of these Hong Kongers do indeed have talent ;b


When I was six years old, my mother took me for piano lessons.  While it was not my instrument of choice (I'd have preferred the drums, actually!), I ended up learning to play the piano for about 10 years.  And when I finally stopped my formal piano studies (after the practice time started seriously eating into my academic study time), I was at the Associated Board of the Royal Schools  of Music (ABRSM)'s Grade 7 and already had passed Grade 8 Music Theory.


Over the course of my piano studies, I had had four different teachers -- all female, two of whom I considered on the unhappily mean side, and two others whom I actually liked, not least because I got the sense that they genuinely loved music and wanted to impart that love to their students.  It also helped that the latter two instructors also appeared to have a sense of humor.  In particular, I remembered one of them telling me to imagine the Sophie whose name was in the title of a piece of music I was playing as a delicate model; so when I played that piece, my fingers should be nimble and ladylike, like the way that she'd walk, rather than produce anything loud and clumsy!


If I were asked, I wouldn't profess to having a particular love for piano playing -- and I don't consider myself to be all that musically talented.  Yet more than once over the years (in places that have included Australia, England, the US, Tanzania and Germany as well as Malaysia), when I've seen a piano available to be played though, I have to admit to not being able to resist sitting down and getting some sounds out of it!  And thus it was earlier this evening when I caught sight of -- and heard music emanating from -- a group of pianos assembled in the courtyard of PMQ, the creative industries hub located in the former Police Married Quarters in Central.

Upon crossing the street and entering into the space, I found 16 individually decorated pianos bearing the words "Play Me, I'm Yours" on each and everyone of them, some of whom were being played with no small amount of enjoyment by people who looked, like me, as though they had been lured into doing so, with no prior plans of playing a piano in public previously!  Something noticeable was how quite a few of them looked to be in a world of their own, focused on the tunes they were teasing out of the piano they had chosen to play -- not caring how their music sounded and/or if other folks decided to take photos of the feelgood scenes in which they had (for a time) become a part.

In between snapping a few photos, I too sat down to make some music -- and thus take part in the Our Hong Kong, Our Talents -- "Play Me, I'm Yours" project which aims to connect people with street pianos.  Eschewing the piano books available to sight read from, I went down Memory Lane and played an international mix of music that included Do-Re-Mi (teehee!) and Tanah Pusaka (a Malaysian song that I learnt to play to accompany a choir while on an Australian youth exchange trip decades ago!).  And yes, it's pretty funny to find what sticks in one's memory after all these years! ;b
Posted by YTSL at 9:41 PM

Looks like fun. Since 2012 Montreal has public pianos different places in the city during summertime. There is one near Concordia Univ where Fantasia Fest is held. This year I saw a homeless man sit down a play a tune.

It was fun! Did you sit down on and play at least one of the pianos you saw in Montreal? :)

Cool, and it's well nigh impossible to resist the lure of those pianos, isn't it? ;b