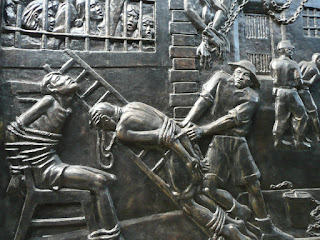 On more than one occasion on my 2013 visit to Vietnam,
I was given reminders of the country's tortured past


In the 1980s through to at least the early 1990s, a number of Hong Kong films took 1970s-era Vietnam -- and those Vietnamese refugees so desperate to leave their country after the war that they'd risk their lives by fleeing on often flimsy boats that sometimes were preyed on by pirates as well as had to battle harsh elements -- as their subject matter.  In some instances, connections were made between the plight of the Vietnamese fleeing a Communist regime and Hong Kongers' Handover fears (implicitly in Vietnam-born Tsui Hark's A Better Tomorrow III (1989) and explictly in Evans Chan's To Liv(e) (1992)).

But while there are those who think this too about Ann Hui's Boat People, the filmmaker has denied that this is the case -- and one must assume that the mainland authorities who allowed this movie to be filmed on Hainan Island and in the city of Zhaijan believed this too!  Something else worth noting is that while its title might get you thinking that, like her earlier The Story of Woo Viet (1981), it focuses on individuals who left Vietnam, this film -- whose Chinese title translates as "Run Towards the Angry Sea" -- actually revolves around a Japanese photo-journalist named Shiomi Akutagawa (played by George Lam) who returns to visit the country three years after covering the Fall of Danang in 1975.


Hailed as a friend of Vietnam by the authorities, Akutagawa is escorted around as well as wined and dined by Cultural Bureau officials, and treated as a honored guest when visiting such as a New Economic Zone where children appear to be growing up to become model Communists.  But especially after Akutagawa is granted permission by a friendly senior government official (essayed by Kei Mung Sek) to go about on his own, the Japanese man soon has his eyes opened very wide as to how terrible life can be for the less privileged, particularly those who were on the losing side of the un-civil war.


Among the people Akutagawa meets whose lives are incredibly wretched are three children (portrayed by Season Ma, Guo Jun Yi and Wu Shu Jun) whose soldier father was unfortunately killed a few days before the war's end, and a young man (played by a close to unrecognizable Andy Lau) considered to be a "bad element" on account of his having been an interpreter for the US army and consequently sent to a New Economic Zone far more hellish than the model one that Akutagawa had been taken to see.  Someone else who gets Akutagawa realizing that things and people often are not what they initially appear to be is an ethnic Chinese woman (essayed by Cora Miao) involved in the black market trade who relies on her connections to survive in some style.


Nominated for 12 Hong Kong Film Awards, Boat People went on to win in five -- including in the Best Picture, Best Director, Best Screenplay (for Chiu Kang Chien) and Best Newcomer (Season Ma -- beating out, among others, Andy Lau) -- categories.  After seeing this powerful drama (and finding myself thinking of certain shocking scenes -- and the way in which they were filmed -- some 48 hours on), I think all these honors are indeed well-deserved.


About the one thing that I'd have changed in this hard-hitting work is the fate meted out to Akutagawa.  But knowing what I do about the way Ann Hui films tend to go, it seemed like the director just couldn't help herself in deciding to apply that final touch.


With regards to Boat People's actors and actresses: I was amazed how unmannered George Lam and Andy Lau were in this film.  And if his character's entry into the movie (and that of Cora Miao's too) had not been met by gasps from the audience (at the Hong Kong Film Archive screening that I attended), I actually would not have realized who the actor playing him was!  At the same time though, Season Ma it was who turned in the most mesmerizing performance of the lot -- and I find it sad that her last movie appearance (in 1989's The First Time is the Last Time) took place just nine films and seven years after this one in which she made her cinematic debut.

I am sorry I missed seeing this on the big screen. I own the dvd, and have watched it twice I think, but always felt I was not getting the full emotional and cinematic impact.

I must admit that I was surprised how much I was emotionally impacted by this movie. Ann Hui films are "hit or miss" with me -- but this one definitely hit! :)

Thanks, will try to catch that showing.

Yes, it seems that I either love or hate her films, there is little in between.

I find that I've generally liked Ann Hui's early films and the ones she's made in the 21st century. But the middle part of her career has some major dogs, including the likes of "My American Grandson", even though she had a lot of good actresses and actors starring in those films!

In any event, I hope you'll like "Boat People" better when you see it on a big screen. :)