A Tai Tam Country Park hike during which it rained twice! (Photo-essay)

In my mind's eye, summer days are hot but frequently have the compensation of having super high visibility.  And it's true enough that there are glorious days when one can clearly for miles.  But the fact of the matter is that there actually are many days in summer when the clouds sit over and/or cover Hong Kong's hills: that is, those sections of Hong Kong where some of the best hiking is to be found!

In addition, June usually is the month that gets the most rainfall in a year, August the month with the second highest rainfall and July the month with the third highest amount of rain.  And although I initially wouldn't have entertained the thought of going out on a hike when there was a chance of encountering any precipitation, I now am not above venturing out into the countryside when the weather forecast is for some light rain showers and drizzle (coupled with warm temperatures).

Even though it actually rained twice on a Hong Kong Island hike that two friends and I went on one afternoon, that didn't dampen our spirits.  Indeed, so intact was our humor that we got to teasing one of our party because it seemed that whenever she decided she had had enough and decided to put on her rain jacket, also get her umbrella out of her backpack plus take the trouble to put some rainproof covering over her backpack, the rain would actually stop, only to return with a vengeance after she decided to remove all her waterproof gear and pack them all nicely back in her bag! ;b 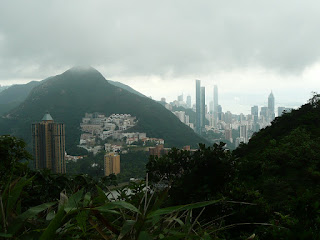 The view (and weather) really wasn't too bad
early on during the Tai Tam Country Park hike... 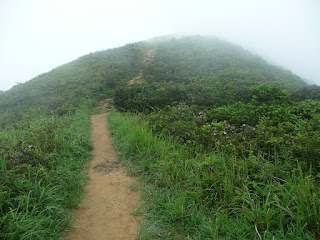 ...but soon afterwards (as we hiked up the Violet Hill peak
that the Wilson Trail goes along), we were hiking in the mist! 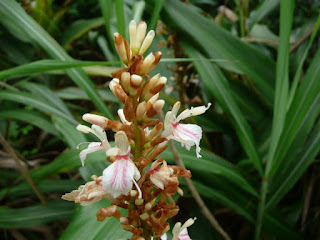 On days like this, one particularly appreciates the splashes
of color that pretty flowers like these add to the scenery :) 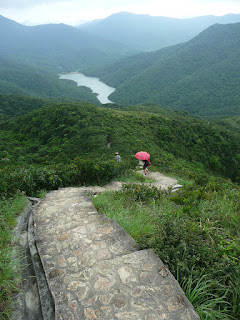 Notice that when my friend had her umbrella up,
it actually was not raining? ;b 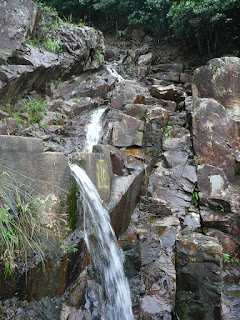 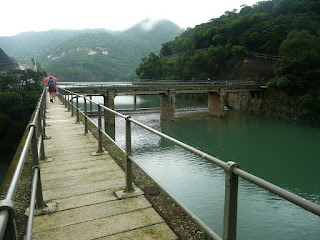 Again, no rain when that red umbrella was held up! ;b 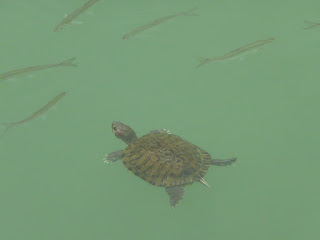 I'm sure it mattered little to the tortoise and its fish friends
in Tai Tam Upper Reservoir whether there was any rain or not :) 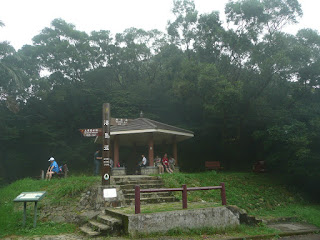 Proof up on Quarry Gap (aka Tai Fung Au) that
we weren't the only folks who had decided
that it was okay hiking weather that afternoon! ;b
Posted by YTSL at 5:56 PM

Hi!
Just wanted to say that I really enjoy reading your posts!
Between my two young boys, job, family, friends and training, my time is very limited, but I often pop in to see wha you´ve been up to:)
Tone

Another good photo-essay which I think confirms that Tai Tam Country Park is a Hong Kong natural treasure...The fourth photo from the top is the kind of balanced vertical composition that I could dream about: foreground steps lead the eye down to the hikers and then continues to the flow of the water below.

Thanks much for taking the time to read my posts -- especially since it does sound like you're a very busy lady! :)

I think Tai Tam Country Park is my favorite country park on Hong Kong Island -- and you have seen why. :)