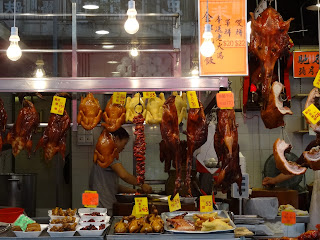 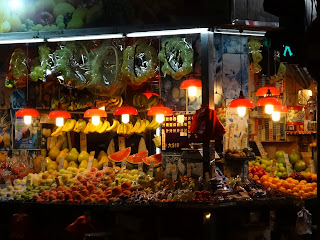 Enticing to not only fruitarians, right? ;b

At various points in my life, I've had friends who were/are vegetarian and even vegan.  Happily for me, none of them have been militant to the extent that they've insisted that I not eat meat in their presence.  Indeed, given my rampant omnivorism, I have to admit to thinking that I'd find it difficult to be (or stay) friends with such people!

In at least one instance, I can remember a vegetarian friend and I causing some bemusement when we went and ordered food at an eatery due to she and I going for very different options.  Although the incident in question took place more than a decade ago now, I still retain vivid memories of the time Rosanne and I took a break from our sightseeing tour of plantations (including the Laura Plantation, where the tales of Brer Rabbit were originally written down) located close to New Orleans -- where she lived and I was visiting -- to get ourselves a po-boy each for lunch.

And it wasn't just the sight we presented (that of one black woman and one Asian) when we walked into the establishment (whose usual clientele as well as owner and employees looked to be entirely Caucasian and male), that caused a bit of a stir.  Rather, I think it also was because when she spotted alligator on the menu, Rosanne insisted that I -- who she used to teasingly call a "flesh eater" -- order, and eat in front of her, an alligator po-boy, then ordered the only non-meat option on the offer, a cheese po-boy!

For the record: both of our po-boys were "dressed" with lettuce, tomatoes, pickles and mayonaise stuffed in between two slices of crusty New Orleans style French bread.  But where Rosanne had slices of tame looking cheese (something along the lines of American or Cheddar cheese) in her po-boy, I had fried breaded alligator meat!

I can't help but think that Rosanne was at least partly hoping that I'd find the alligator meat to be unpalatable.  If so, she was disappointed (though, to be fair, she didn't show it!), for I found this exotic meat to be pretty tasty -- and actually taste like, well, chicken!  (And I know it's like a classic joke that when are asked what this or that exotic meat they eat tastes like, people say "chicken" -- but I truly did think it the case in that instance!) ;b
Posted by YTSL at 10:03 PM

In contrast to you, most of my vegetarian friends are long-term vegetarians -- but I share your opinion that our teeth are meant to eat variety of foods with! :D