One hot and humid day a while back, two friends and I decided to go up Needle Hill, a 532-meter-high peak with one of those steep hiking trails that take the most direct route up it rather than have what would have been helpful switchbacks.  And if one were to follow along Section 7 of the Maclehose Trail, next up would be Grassy Hill, its 647-meter-high neighboring peak.

However, the three of us decided midway through the hike that we'd leave that for another day and instead, tried out a new (to us) route that took us down to Fo Tan, which just happens to be where one of us resides!  Thus it was that, having begun the trek at a reservoir (in this case, Shing Mun) in a country park, but then ended up in what's historically a light industrial area (but now also is home to many artist studios), we managed to go on foot from nature to concrete jungle that one afternoon in Hong Kong! :) 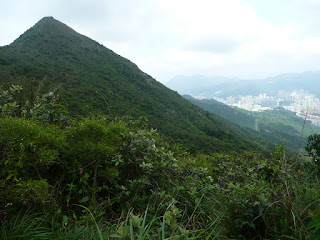 If its name didn't already make clear, Needle Hill is one of
those pointy-peaked -- rather than gently rolling -- hills! 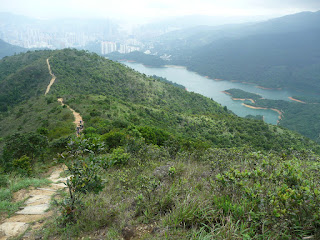 I couldn't help but pause a few times along the way
to look back and enjoy the views :) 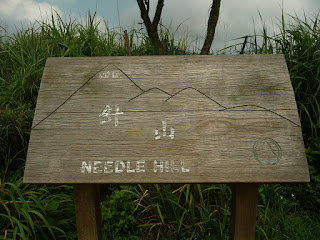 Proof that we made it up to the top! :b 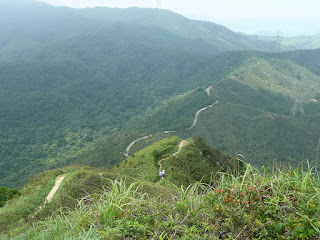 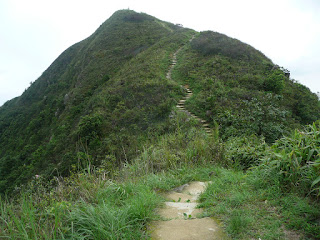 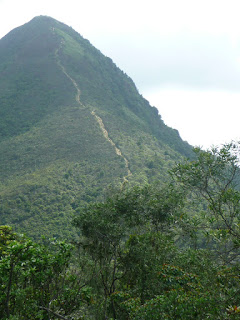 Viewed from this angle, I'd have to think twice
both about going down or up Needle Hill
(but then can tell myself that I did it)! :b 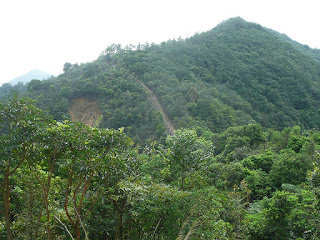 After that, the trail that led down to Fo Tan was
pretty easy going, despite warnings to the contrary
by the Sha Tin District Council! 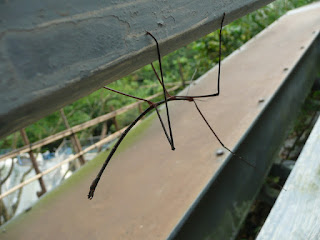 Bonus spotting: towards the end of our hike, we came across
a stick insect hanging for dear life from a roadside railing! :)
Posted by YTSL at 8:16 PM

It depends on your hiking speed -- but for someone like me, I think it'd have taken a couple of hours to get from the top of Needle Hill down to Sha Tin, especially on a hot summer's day like when my friends and I did this hike.