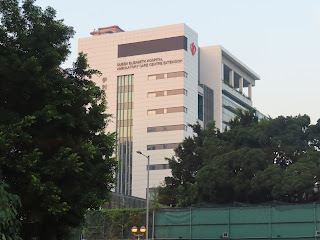 A hospital in Hong Kong bearing the name of
a British monarch who reigned over the territory
It's not been as crazy as the queue in London to view Queen Elizabeth II's Lying-In-State at Westminster but this past week and a bit also has seen Hong Kongers lining up for hours to pay their respects to the Queen in what has been perhaps the biggest display of affection for the late monarch (who passed away on what was still September 8th in Britain but already early September 9th in this part of the world) seen outside the United Kingdom.
But, as more than one commentator has noted (including in a BBC report by Grace Tsoi and Joyce Lee), "the collective outpouring of grief says as much about the present as it does about the past, and comes as Beijing has been tightening its grip."
Something to bear in mind when considering Hongkongers' mourning of the Queen (whose funeral proceedings are taking place as I write this blog post): Hong Kong is a city where the public mourning of such as the Tiananmen Square Massacre and what happened at Prince Edward MTR station on August 31st, 2019, has not been allowed in recent years, never mind  the mourning of what Hong Kong itself has become -- not dead but also nonetheless a city and society that's less ideal than the one many people want and knew.
With the mourning of the passing of Queen Elizabeth II being the rare event in post-national security law and Covid era Hong Kong where public mourning has been allowed, "[f]or some, commemorating the Queen is a way to express their unhappiness at the Hong Kong government", with some people being pretty open about this.  In fact, the BBC report actually quoted a "Mr Tse, who brought his pet Corgi on a leash with a Union Jack, [as stating that] the mourning was an "alternative form of political expression"."
Which is why pro-Beijingers have been upset with the mourning and heaped pressure on certain celebrities to apologize for doing so. Thus far, Cantonese opera star (and sometime Stephen Chow movie co-star) Law Kar-ying has publicly apologised for mourning the passing of the Queen. The latest local celebrity being attacked: Suzhou-born but decades-long Hong Kong resident (and, to many, now an honorary Hong Konger), actress Carina Lau.
The heckles of pro-Beijingers will undoubtedly be raised further after what happened this evening outside of the British Consulate here in Hong Kong (Go here for an extended thread by Razven that began in the daytime but went on past sunset).  In particular, I'm sure they'd be irate at the fact that someone took out a harmonica and played a certain tune close to the heart of many Hong Kongers that a good part of the assembled crowd decided to sing to.  And that he then performed an encore (before the police intervened and, expectedly but still sadly, took him away).
Historian Jeppe Mulich, watching from far away in London, was moved to state the following about what was going on here in Hong Kong: "When rituals of public mourning aren't just about mourning."  Lawyer Kevin Yam, viewing from Australia, Tweeted the following: "If anyone had any doubt over what all the commemoration of [Queen Elizabeth II in Hong Kong] was really about, let this scene clarify everything."
Put another way: Shame on those who think that resistance is dead in Hong Kong.  For yes, mourning is a form of resistance.  Ditto remembering what Hong Kong was -- the good about and in Hong Kong along with the bad -- and continuing to possess alternative visions of what Hong Kong can and could be.  (And as for those who have prematurely pronounced Hong Kong itself dead: let me be clear -- you are no friend of Hong Kong if that's what you have done.)
Posted by YTSL at 11:59 PM