Reiterating the importance of remembering, and recognizing courageous Hong Kong and Taiwanese women 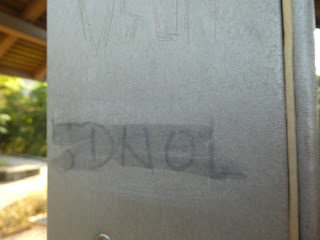 They're trying to hide the truth (as well as deny our demands) but
our memories remain, as does our determination to continue to ga yau
The Hong Kong Twitterverse has been abuzz for the past 24 hours or so with indignant responses (e.g., this,  this and this) to Hong Kong security chief Chris Tang's latest attempt at gaslighting -- this time involving the denial that police officers had entered the campus of the Chinese University of Hong Kong back in November 2019 -- that came as part of his attack on Stand News, one of Hong Kong's few remaining independent news outlets.  The calling out of Chris Tang is a measure that there still is life in Hong Kong's resistance (which, like Hong Kong itself, is NOT DEAD, despite what (too) many outside observers -- but not Jeppe Mulich -- seem to think).
Sure, those who want democracy for Hong Kong continue to be persecuted and prosecuted, and a not insignificant number are indeed behind bars and have been silenced.  (Re the last: check out the bail conditions for former pro-democracy politician Ray Chan, one of the minority of national security law defendants who are free on bail while awaiting trial.)  But many continue to speak out, even if -- like with the likes of former legislative councillors Nathan Law and Ted Hui -- it is from exile.
And in recent days, it seems that the world is showing that it's not forgotten them and Hong Kong -- with such as the spotlighting of Jimmy Lai's plight (and Hong Kong's along with him) by international press organizations, and now also Agnes Chow being named to the Financial Times' 25 most influential women of 2021 list along with the likes of Naomi Osaka, Chloe Zhao and Tsai Ing-wen
For her profile on Agnes Chow, Primrose Riordan wrote that: "Silenced, Chow is hardly forgotten. Scared of doorbells and doorknocks after multiple arrests, she left prison in June to the chants of her supporters yelling “Jia you!” or “Come on!” On her T-shirt were the words: “You are doing so great”."  But even while Hong Kong's "Goddess of Democracy" -- who, incidentally, turned 25 yesterday -- continues to have her supporters, there also are people who wish that other Hong Kong females had been recognized instead -- like, say, Chow Hang-tung (who's still most definitely battling away), Tiffany Yuen, Gwyneth Ho (the last two of whom have continued to be vocal even while behind bars) and Margaret Ng.
Rather than quibble about which Hong Kong female should have been on that list though, I'll just say that it says a lot (of good) about this tiny -- relatively speaking, of course! -- territory that it has so many courageous women who love Hong Kong.  And it also is a tribute to Taiwan, of course, that it has Tsai Ing-wen as its president.
The following is part of what's written about her in that Financial Times piece: "unlike so many of the world’s political and business leaders who self-censor at the first hint of displeasure from Beijing, Tsai does not buckle in the face of intimidation. Nor does she antagonise. Instead she continues to articulate, and to demonstrate through her own style of leadership, how Taiwan’s values are distinct from those of its giant neighbour. Her leadership offers a lesson for all of us: how to respect Chinese interests without selling out our own."
Sounds great, right?  And speaking of Taiwan: the Taiwan Film and Audiovisual Institute recently produced -- and uploaded onto Youtube -- a short film about memory as a moral project to build a better nation (link here; and yes, it comes with English along with Traditional Chinese subtitles).  When viewing it, one can't help but think of the People's Republic of Amnesia and the ongoing attempts by the authorities in Hong Kong to wipe out or, at the very least, warp memories.  And yeah, I absolutely know which side I'm on with regards to how to view and treat memories.
Posted by YTSL at 6:25 PM