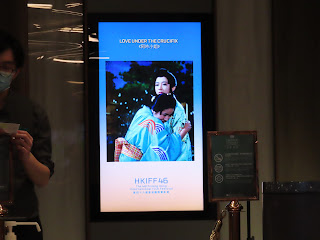 The final screening I attended at the 2022
Hong Kong International Film Festival
Love Under the Crucifix (Japan, 1962)
- Part of the Hong Kong International Film Festival's Portraits of Women -- A Tribut to Tanaka Kinuyo program
- Kinuyo Tanaka, director
- Starring: Ineko Arima, Tatsuya Nakadai, Ganjiro Nakamura
The final film directed by Kinuyo Tanaka -- and the final film I viewed at the Hong Kong International Film Festival this year -- is set further back in time than any of the four other films she helmed that I viewed over the course of the fest.  Set in 16th century Japan, when Hideyoshi Toyotomi held power over much of the country (rather than the Emperor who sat on the Chrysanthemum Throne), Love Under the Crucifix focuses on a woman in love with a man.
But contrary to the synopsis which appears on its Internet Movie Database (IMDB) page, neither the woman in question nor her father are, in fact, Christian!  For while it's true that the film's female protagonist, Ogin (played by Ineko Arima), does have a bible and a cross on a chain, she appears to treat them more as love tokens from the Christian man that she's fallen for: her tea-master father's former pupil, the Christian samurai-daimyo Ukon Takayama (portrayed by Tatsuya Nakadai).
More than incidentally, many of the characters in Love Under the Crucifix are based on real life historical personalities.  And, for the record, Ogin's father, Sen no Rikyu (essayed in this cinematic offering by Ganjiro Nakamura), is someone I learnt about on visits to various historic sites in Japan (e.g., Kyoto's Ginkakuji).  And no, he was not a Christian.  Also, he actually had more children than the one daughter and son shown in the film -- so we know that this historical drama does take liberties with certain facts (even while adhering to others.  For example, he was indeed the tea master for Hideyoshi Toyotomi.)
Maybe because I knew most about him prior to viewing Love Under the Crucifix, I found the sub-plots involving Sen no Rikyu to be more interesting than the film's main story involving Ogin and Ukon Takayama.  It doesn't help that Ogin was too love obsessed for my liking and the character of Ukon Takayama too much of a cypher.  Re the latter: it's made clear that he's staunchly Christian but it's hard to understand why; something which should have been worth exploring in view of any Japanese individual professing to be Christian effectively involving accepting a death sentence after Hideyoshi Toyotomi saw it as a threat to national unity and thus something that needed to be repressed.
In contrast, Sen no Rikyu came across as a three dimensional character: one devoted to perfecting the tea ceremony but also a man with a lot of love for his wife and young woman who actually wasn't his biological offspring but whom he treated very much as his daughter, and one with such strong ideals that he would think it only right to answer an angry tyrant's questions honestly.  And I get the feeling too that Ganjiro Nakamura was responsible for investing his character with the requisite gravitas to make him one who commanded respect and admiration.
With regards to the film's director: I have to admit that none of Kinuyo Tanaka's helmed efforts completely bowled me over.  At the same time though, none of the ones I viewed could be said to have been poorly made either.  And, taken as a whole, they actually make for a pretty impressive filmography; this not least because they encompass quite the range in terms of subject matter -- even while it's true enough that she did seem to favor biopics with a literary connection; with three of her films being such (e.g., The Wandering Princess, which was based on the memoirs of the protagonist, and Forever a Woman, which told the story of a woman poet, as well as Love Under the Crucifix)!
My rating for this film: 7
Posted by YTSL at 11:26 PM