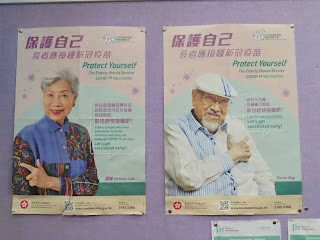 If  the Hong Kong government were serious about getting the elderly
vaccinated, there would be more of these PSAs about than
HKSAR 25th anniversary and China 73rd anniversary banners!
I felt very hot earlier today; and not just because Hong Kong recorded its highest temperatures ever in September (e.g., 35 degrees Celsius at the Hong Kong Observatory in Tsim Sha Tsui) today.  Rather, it's because at his weekly press conference this morning, Chief Executive John Lee was reported to have said things like, as turned into Twitterspeak by Tripperhead, "Need to raise vax rate. Covid isn't the flu. Six times more deadly" that got more than one person thinking of the infamous saying that "There are lies, damn lies, and statistics".
In response, another member of the Twitterati, Joel Chan, was moved to supply some contextual as well as comparative statistics.  Among them: "Case fatality rates: Seasonal flu (US CDC, 2010-2019): ~0.097%-0.2% ; Covid-19, Hong Kong, 6th wave (estimate): 0.096% (432 deaths and 448121 cases since May 31)."  Also: "Case fatality rates, Covid-19 Singapore (since 2019): 0.086% Hong Kong 6th wave only: 0.096% Hong Kong 5th & 6th wave: 0.62%" as well as pointing out that "The reason Covid’s death rate during the 5th & 6th wave is 6 times higher than flu is because the elderly weren’t vaxxed and the hospital system crashed".
Still, THE point from today's conference that nearly caused me to pop a vein was this: "Unvaccinated individuals travelling from mainland China to Hong Kong can obtain a Vaccine Pass after entering the city because of the low Covid-19 infection rate across the border, Chief Executive John Lee has said, adding that the policy had been in place “for a long time."  Here's the thing though: the policy may have been in place "for a long time" but the first time that I -- and many other people -- heard of it was today!  In other words: a major bombshell just dropped as far as the likes of us were concerned!
"“The main reason is that the risk of Covid-19 infection in the mainland is the lowest in the world,” Lee said. “Its risk, when compared with Hong Kong, has been much lower.”"  Really, now?  I mean, sure we have official statistics from the Chinese government -- but how trustworthy are those?  We're talking, after all, about the government in whose country the Wuhan coronavirus was first detected and who sought to suppress this news for a time!
The Hong Kong Free Press piece I previously quoted goes on to state this: "As per a government statement published on May 5, arrivals from the mainland or Macau who were not required to undergo compulsory quarantine have been allowed to obtain the provisional Vaccine Pass by completing a declaration form as well as presenting their identity document and “other relevant proof” at a designated post office. The provisional pass remains valid for 180 days."
So... there have been who knows how many people from Mainland China and Macau coming to Hong Kong for some time now who are unvaccinated yet can get a Vaccine Pass.  Semantics aside (think about it: they managed to get a vaccine pass without getting vaccinated), why the hell have they been allowed to do so but similarly unvaccinated Hong Kongers not?!
And health concerns aside, I foresee some negative reactions to this disclosure today by John Lee.  One involves Hong Kongers now feeling they have health reasons to discriminate against any Mainland Chinese person -- even though some of them may be/are vaccinated and some of them actually Hong Kong (permanent) residents who have had to adhere to the same rules and regulation as other Hong Kong residents.  Another involves those exempt Mainland Chinese feeling that they are, in fact, "cleaner" and more superior than Hong Kongers.  A third involves even more Hong Kongers now not wanting to get vaccinated, boosted and/or double boosted.  And a fourth involves even more Hong Kongers not wanting to use the Leave Home Safe app that's part of the whole Vaccine Pass thang!
Some more from the Hong Kong Free Press article: "Meanwhile, those who visit the city from overseas must have received at least two jabs to obtain the provisional pass. International arrivals must also quarantine at a designated hotel at their own expense for three nights upon entering the city, followed by four days of “medical surveillance,” during which they will be issued a yellow code in their LeaveHomeSafe app that bars them from entering restaurants and other premises under the vaccine pass scheme."  And remember, these include Hong Kongers returning from other terrritories (besides, we now know, Macau and Mainland China).
Another famous quote comes to mind as a result: "All animals are equal, but some animals are more equal than others."  Yep.  From George Orwell's Animal Farm -- much of which, together with his 1984, often resonates a lot for those of us living in Hong Kong 2022.
Posted by YTSL at 6:11 PM