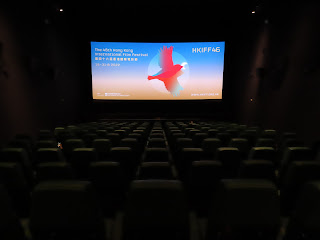 A familiar sight for me during this year's
Hong Kong International Film Festival! :)
Forever a Woman (AKA The Eternal Breasts) (Japan, 1955)
- Part of the Hong Kong International Film Festival's Portraits of Women -- A Tribute to Tanaka Kinuya program
- Kinuya Tanaka, director
- Starring: Yumeji Tsukioka, Ryoji Hayama, Masayuki Mori, Yoko Sugi
After being introduced to the directorial efforts of Kinuya Tanaka by way of Love Letter (1953), I was looking forward to checking out more of her filmography and glad that I had bought tickets to HKIFF screenings of four of them.  And the second work by Japan's second female director that I viewed started off promisingly with scenes that were distinctly Japanese in some ways, yet also different from what many people expect of the East Asian country -- by way of its story being set in Hokkaido, which can come across the closest thing that the Land of the Rising Sun has to the American Wild/Frontier West due to it being a place where cows dot the landscape and winters are on the snowy side.
Forever a Woman centres on a woman named Fumiko Shimojo (played by Yumeji Tsukioka) who's story is based on renowned poet Fumiko Nakajo (who passed away just one year before this film's original release date).  First introduced in the movie as a loving mother (of two young children), its protagonist soon also is revealed, despite her efforts to be a good wife, to be unhappily married to a layabout whom she divorces soon after she finds that he's cheating on her.  And while he remarries soon afterwards, she doesn't.  Instead, Fumiko appears to have reserved her love for the most part for her children and her poetry, which she already was composing when she was married but only had them published after her divorce.
Life as a divorced woman in Japan in the first half of the 20th century must surely not have been easy for anyone.  But Fumiko is able, at least, to count on the support of her loving mother and brother, and friends like Hori (Masayuki Mori), who she's revealed to have had a crush on, and his sweet teacher wife, Kinuko (Yoko Sugi), along with devotion of her two children.  Still, the fates really do seem to have it for her after she is found to have breast cancer, needs to get a double mastectomy and end up spending the rest of her days in a hospital waiting for death to come along.
Understandably, then, Fumiko is hardly the happiest of characters.  At the risk of sounding like I have a hard heart though, I must admit to finding her way more self-pitying and mercurial than I would like; this particular since a very substantial chunk of Forever a Woman is devoted to depicting her suffering!  On the one hand, I applaud Kinuyo Tanaka (and scriptwriter Sumie Tanaka -- no relation) for taking on what must have been an unusual and daring subject, especially in 1950s Japan   On the other hand, I wonder whether the story would have been better served with a less indulgent and melodramatic treatment and less expectation that the film's audience would -- perhaps because its protagonist is based on a real life literary celebrity/personage -- of course be sympathetic to its main character; all of which resulted in the movie, particularly its latter portion, dragging on for longer than I found ideal!
My rating for the film: 6.0
Leila's Brothers (Iran, 2022)
- Part of the Hong Kong International Film Festival's Cinephile Paradise program
- Saeed Roustaeee, director and scriptwriter
- Starring: Taraneh Alidoosti, Saed Poursamimi, Navid Mohammadzadeh, Payman Maadi, Mohammad Ali Mohammadi, Farhad Aslani
Another day, another film about a headstrong woman who often feels put upon.  Leila (Taraneh Alidoosti) is a 40-year-old Iranian woman who's still unmarried and living with her parents.  She's also the chief breadwinner of her family despite having four brothers, three of whom are unmarried too.
One of her brothers, Alireza (Navid Mohammadzadeh), is introduced in an incredible sequence which takes part in the large factory in which he worked until chaos erupted after the workers were herded out of it soon after finding out that another month would be going by without their getting paid.  Their father, Esmail (Saeed Poursamimi), is also introduced in another impressive sequence that involves hundreds of extras.  (Leila's Brothers has a number of visually amazing sequences that must have taken so much effort to stage.)
Another brother, the conniving Manouchehr (Payman Maadi), gets introduced in another visually innovative way too.  But even though two other brothers -- wrestling fan Farhad (Mohammad Ali Mohammadi) and overweight janitor-family man Parviz (Farhad Aslani) -- don't get introduced in ways that are as eye-catching, rest assured that all of Leila's brothers are revealed to have distinct personalities along with Leila and their father.  And yes, this really is one of the absolute pluses of this multi-layered film that manages to be enthralling for all of its 169 minutes.
At one level, Leila's Brothers is a family drama about individuals trying to get ahead in life in a country that clearly has economic problems along with social(-economic) divides.  In order to do so, people form alliances and work together but also use, step on, fool and betray others, including family members.  Along the way, some people dream and others fantasize while still others are wont to stay pragmatic or even refuse to have much hope at all.  And throughout, this masterful cinematic offering is involving and absorbing, and gets under your skin for days (weeks even) after one's viewing of it.
My rating for this film: 8.5
Posted by YTSL at 11:59 PM

Been reading "The Absolutely True Diary Of A Part Time Indian" by Sherman Alexie. He also did some films. I hope I can find them.
Coffee is on and stay save

I had a student back when I was teaching in the US who was a fan of Sherman Alexie's novels. But have you heard that he was accused of sexual harassment in 2018 and that he had a number of prizes and honors taken back as a result?