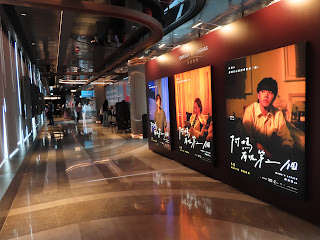 Advertising for Mama's Affair in a Hong Kong cinema
Mama's Affair (Hong Kong, 2022)
- Kearen Pang, director and scriptwriter
- Starring: Teresa Mo, Keung To, Jer Lau
Mama's Affair is a subversive film.  I don't mean politically -- and, in fact, this sophomore effort from director-scriptwriter Kearen Pang (whose debut directorial effort, 29+1 (2017), I was impressed by) is the most apolitical contemporary Hong Kong movie I've viewed for in a while.
Rather, it's that this wholesome drama whose main box office draws are Mirror members Keung To and Jer Lau actually has them playing second fiddle dramatically to veteran actress Teresa Mo and although you'd have thought that it'd have appealed to the younger generation, actually pays tribute to an older one.  Which, actually, is not a bad thing as doing so gives the movie far more dramatic substance and emotional heft than it might otherwise have.
Not that the Mirror "boys" (who are actually older than they look and the characters they play in the movie) lack for screen time.  Also, at least one of them gets plenty of opportunities to sing and show off his dance moves as well as his acting chops -- playing a cha chaan teng worker with a singing talent that's too good to go to waste in this film about a music producer turned housewife who decides to work outside the home again after close to 20 years of focusing on looking after her beloved only son.
Mei Fung (portrayed by Teresa Mo)'s first job upon attempting to "get back into the business" is at a music academy owned by an old friend (played by Vincent Kok) whose staff include the likeable Kaki (played by Kaki Sham) and Ann (essayed by Amy Tang), through whom she comes to know their friend and cha chaan teng worker, Fong Ching (portrayed by Keung To).  Famed for being a talent spotter (who nurtured talents including Leo Ku, who makes a cameo in the movie), Mei Fung decides that Fong Ching is another music talent that could make it big and decides to help him find fame and fortune.
When they first meet, Fong Ching is living with his aunt and tells her that he's an orphan.  Soon, he's moved in with Mei Fung and her son, Jonathan (played by Jer Lau), a star student in his final year at school who aspires to study architecture at Cambridge University.  (A note re Jer Lau: He was so convincing as a secondary school student that it was quite the shock to belately discover that he is, in fact, 29+ years old!)
With Mei Fung lavishing a considerable amount of attention and effort on Fong Ching, Jonathan can't help but have complicated -- verging on the negative -- feelings towards Fong Ching.  And this particularly since Fong Ching's moved into their home shortly after his father (played by Vincent Wan) had left home without either him or Mei Fung telling Jonathan why.
At one point, Jonathan jokes about people thinking Mei Fung is having an affair with Fong Ching.  But, really, Mama's Affair is not that kind of movie.  Rather, it is a film that places an emphasis on the love between family members rather than love of the carnal kind.  And there are many heartwarming scenes that ensue in the movie that tug at one's heart and got even a someone like myself (who would not identify as a Mirror fan) shedding happy as well as sad tears.
My rating for this film: 8
Posted by YTSL at 11:16 PM

Thanks for the review. I look forward to seeing it! I wonder what the Cantonese title of this movie is and if it is similarly misleading. Will find out.

Thanks for reading the review. The movie's Hong Kong Chinese title is 阿媽有咗第二個, which I think translates as "Mother has a second one"...! :D