Yet another sad day in post-security law Hong Kong 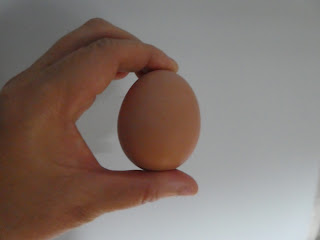 An egg I was given out in West Kowloon today which got me
thinking of Haruki Murakami's quote re the egg versus the wall*
"I really feel the urge to swear non-stop right now. #HongKong."  Thus Tweeted Hong Kong lawyer Kevin Yam earlier this evening.  I imagine many Hong Kongers share his feeling -- and know what caused them.
At the end of a marathon four day bail hearing for the 47 pro-democracy politicians and activists arrested back in January, and then charged and put behind bars on Sunday, which began on Monday morning, the presiding national security magistrate granted bail to 15 out of the 47.  But before they could get a taste of freedom this evening, the Department of Justice moved to have a review of the decision -- resulting in that 15 being remanded into custody once again along with the 31 defendants who were denied bail outright (including those already serving time, like Joshua Wong, and refused bail and thus in custody on other charges, like Wu Chi-wai and Benny Tai).
As Timothy McLaughlin (author of the must-read "The Leader Who Killed Her City" piece on Carrie Lam) observed: "Everything about the past four days appears designed to inflict maximum punishment and break spirits. Monday’s hearing stretching into Tuesday, exhausted defendants needing hospital treatment, the instantaneous appeal, massive and aggressive police deployment. All of it."
Frankly, even those of us who are just observers for the most part feel mentally and physically exhausted and drained by it all.  Whither the defendants (at least six of whom -- including Clarisse Yeung, Mike Lam, "Long Hair" Leung Kwok-hung, Lester Shum and Owen Chow -- have needed to be hospitalized over the past 96 hours) and their family members (all of whom have been denied access to their loved ones since their being taken away from their homes)?
Adding to the stress of it all, of course, is the fact that, as Amnesty International declared in a statement issued this evening: "These prosecutions are an unprecedented attack on freedom of expression and association in Hong Kong, [with] the four-day hearing in gruelling conditions cast[ing] grave doubts over the fairness of this trial from the start."
The human rights organization also pointed out that: “None of [the accused] have committed a recognized crime, but they have fallen victim to a national security law that deems people a ‘threat’ simply for the peaceful expression of political views and for taking part in the conduct of public affairs"; and "[t]he denial of bail to the majority of defendants was essentially a forgone conclusion, despite the fact that all those charged should still be presumed innocent."  In other words: Not only are the people charged not guilty of any recognized crime, they are not being presumed innocent until proven guilty like it's long been accepted practice in Hong Kong.
Even before today's court decision, American non-governmental organization (NGO) Freedom House decided to give Hong Kong its lowest score ever and deem it only "partially free" in its latest annual report.  Separately, American conservative think tank, The Heritage Foundation, booted Hong Kong off the index of economic freedom that it used to top after ascertaining that the economic policies are controlled from Beijing -- in other words, that "one country, two systems" is no longer in place.
The Hong Kong government can protest all the way about this (and they already have -- cf finance secretary Paul Chan's remarks here).  But the absence of the phrase "one country, two systems" along with "Hong Kong people ruling Hong Kong" and "high degree of autonomy" from a a report at China’s largest annual political session says so much more about those no longer being idea(l)s one can at least pretend to exist or even aspire to.
And in a sign that worse is to come: A resolution on reforming Hong Kong’s electoral system has been placed on the agenda of the upcoming meeting of the National People's Congress (NPC) – confirming widespread reports of imminent changes to guarantee that only patriots be allowed in positions of power.  And while actual details are yet to have been released, we know this can only mean that Beijing will exercise further control and repression in Hong Kong in order to limit the chances of democracy blooming in this Special Administrative Region.
Yet, amidst it all, like Haruki Murakami, I still find myself siding with the egg over the wall.  And if you don't know what I'm talking about, this is what the Japanese writer said in a speech back in 2009:

If there is a hard, high wall and an egg that breaks against it, no matter how right the wall or how wrong the egg, I will stand on the side of the egg. Why? Because each of us is an egg, a unique soul enclosed in a fragile egg. Each of us is confronting a high wall. The high wall is the system which forces us to do the things we would not ordinarily see fit to do as individuals . . . We are all human beings, individuals, fragile eggs. We have no hope against the wall: it's too high, too dark, too cold. To fight the wall, we must join our souls together for warmth, strength. We must not let the system control us -- create who we are. It is we who created the system.

Allow me to quote Herbert:

A fuler must learn to persuade and not to compel.

I think you meant to write "ruler", not "fuler". But, yes, indeed. Otherwise, the ruler will never ever be able to properly rule, never mind win the hearts and minds of the people.

Easily spotted. And thanks for sharing the quote -- by a sci-fi writer, I see!

Herbert is not just a Sci-Fi writer. He was many other things. https://en.wikipedia.org/wiki/Frank_Herbert

Allow me to quote something else, also from Herbert:

All governments suffer a recurring problem: Power attracts pathological personalities. It is not that power corrupts but that it is magnetic to the corruptible. Such people have a tendency to become drunk on violence, a condition to which they are quickly addicted.

Thanks for the added info re Herbert, and the added quote. In turn, here's sharing one from Richard J. Bernstein's "Why Read Hannah Arendt Now", which I read from cover to cover the first three days that I was over at the West Kowloon Magistrates' Court: "We must resist the temptation to opt out of politics, to assume that nothing can be done in the face of all its current ugliness and corruption. To do so is to allow ourselves to become complicit with the worst."