Continued evidence of people lacking confidence in Hong Kong's current situation and government, and still more reasons for their being this way inclined 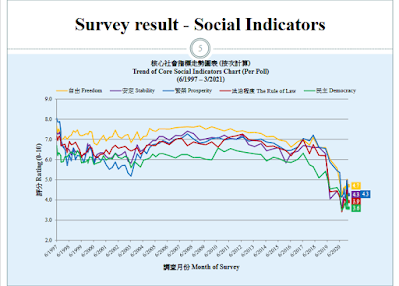 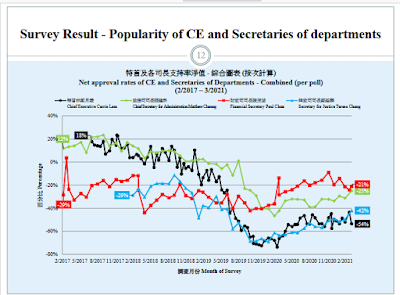 And here's the chart showing the net approval ratings for Hong Kong's
Chief Executive and three other senior government officials
(also released by HKPORI)
Hong Kong's premier polling authority, the Hong Kong Public Opinion Research Institute (HKPORI), released its latest findings as to public confidence in the state of Hong Kong’s democracy, rule of law and stability earlier this week.  The results do not provide one with much confidence in Hong Kong's current situation or future.
The latest survey was conducted between March 8th and 22nd.  Some of the events that took place during this period include China's rubberstamp congress endorsing a proposal to drastically overhaul Hong Kong's electoral system, film and arts censorship fears and woes coming to Hong Kong, and further "lawfare" being enacted in Hong Kong's courts, resulting in the incarceration of a number of people months before their court cases officially begin.
So it really shouldn't be that big a surprise that the results show that public confidence in the state of Hong Kong’s democracy, rule of law and stability have fallen significantly in the past month.  At the same time though, I think it's very much worth noting that this month's findings are the lowest ratings since January, which saw a record low in public confidence since Hong Kong was handed over by the British to China on July 1st, 1997.
Something else that the HKPORI poll's findings shows is that those who believe that doing away with (talks of/demands for) democracy will bring increased stability and rule of law to Hong Kong are the minority in the territory.  This even if they are in the majority -- or maybe the totality -- in Hong Kong's government.
This difference in opinion undoubtedly plays a part in the results of another HKPORI survey whose results were released earlier this month: that which looked into the popularity (or lack of it) of Hong Kong's Chief Executive and her principal officials.  A few lines from the report of the survey results should give a clear picture of where they, particularly Carrie Lam, stand in the view of the public:

Our latest survey shows that the popularity rating of CE Carrie Lam has dropped significantly by 4.4 marks compared to half a month ago, now standing at 29.5 marks. 43% of respondentsgave her 0 mark. Her approval rate is 18%, disapproval rate 72%, giving a net popularity of negative 54 percentage points, which has dropped significantly by 10 percentage points.

And no, your eyes did not deceive you: "The leader who killed her city", as she was billed in an article in The Atlantic, has a minus 54 percentage point popularity rating.  So if ever there were a democratic election in Hong Kong for Chief Executive, the odds would very much be against Carrie Lam winning it -- or another electoral race in the territory, actually!

In view of certain events and revelations that have taken place in recent days, I can only conclude that public confidence in the state of Hong Kong’s democracy, rule of law and stability, and also its government, will have fallen still further.  Just from the past two days alone: yesterday, we had the bombshell ruling by Hong Kong's High Court that a "joint enterprise" doctrine can be used in cases of riot and unlawful assembly.

Consequently, "defendants who come before the courts in Hong Kong facing rioting and unlawful assembly charges may still be convicted – even if they were not present at the scene of protest"!  Put another way: charges of rioting and unlawful assembly could legally be imposed on a crazy percentage of the Hong Kong population; this especially since the police were frequently kettling people and arresting pretty much anyone in the vicinity of protests in 2019 and 2020, including those taking place on university campuses, inside of shopping malls, and busy shopping, dining and drinking, and tourist districts -- and by anyone, I include such unlikely individuals as children out to buy crayon and a bus driver who honked his horn!

Then today, in addition to protest-related lawfare (which is being extended in 2023, at the earliest), we've got further shennanigans related to the suspension of the BioNTech vaccinations here in Hong Kong.  More specifically, the Hong Kong government has apparently discarded all the problematic bottles, or the vials of BioNTech vaccine, that had been determined to be faulty.  Consequently, as the co-chairman of the Medical Association's advisory committee pointed out, "we don't have those bottles as evidence for the company of BioNTech to check what had happened"!

Almost needless to say, this is not standard procedure.  And it fuels people's suspicions that there is something weird going on, if not downright problematic, with regards to the government's handling of the BioNTech section of its coronavirus vaccination scheme.

At this point, about the best outcome we can hope for is that the Hong Kong public decide that there not only is nothing wrong with the BioNTech vaccines but also that the government seems to want to make it hard for people to take them, with the latter point getting people to, conversely, really want to get that vaccine as a result!  Because if we're going to wait for the majority of Hong Kongers to be okay with taking the Sinovac vaccine, we're going to have to wait for an eternity; this even while there have been cases of Mainland Chinese individuals coming to Hong Kong to (illicitly) get those Chinese-made jabs!