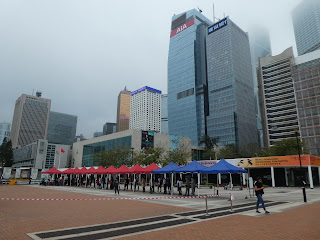 Seen outside City Hall yesterday morning (See the advertising
for the HKIFF in the background as well as the line in front?) 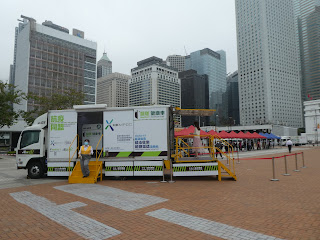 Testing for the Wuhan coronavirus right in central Hong Kong
As long-time readers of this blog will know, the Hong Kong International Film Festival (HKIFF) is something that means a great deal to me.  Before I even moved to the Big Lychee, I was coming here for it and I look forward to checking out a bunch of cool movies at it each year.
It thus was a major disappointment as well as shock to have no Hong Kong International Film Festival to be able to attend last year.  After all, even in 2003 (the year of SARS), the show went on.  So I really hope that there will be a HKIFF this year even while fearing that this year's edition of the fest will get called off too -- this especially after news came last week of a new cluster of coronavius cases that threatened to further prolong the fourth wave or be the start of a fifth wave.
Right now, we're less than two weeks until the opening day of this year's HKIFF and this week finds me more hopeful that the show will indeed go on this year (thanks in no small part to the number of daily new cases being back in the low 10s, like today's 13).  Yesterday, I spent around three hours waiting in line to get tickets for fest screenings -- and even though I actually got to one of the ticketing centers half an hour before ticketing began for the fest, I only managed to get tickets for two thirds of the screenings I wanted to attend!
Among the films I really wanted to get a ticket for but couldn't were the two opening films: Septet: The Story of Hong Kong, which had its world premiere at the Busan International Film Festival last year; and Where the Wind Blows, which is due to have its world premiere at this year's HKIFF.  Their status as fest openers obviously made them top draws for fest goers.  But this year, the usual eagerness to check out marquee local films like this is compounded by the uncertainty as to when one will next get a chance to view them on a big screen -- due to cinemas having been closed down for a time as part as anti-pandemic social distancing measures but also because of rising fears of political censorship of the arts in Hong Kong.
It's bad enough that this week has seen the cancellation of screenings of the Hong Kong Film Critics Society's choice of best film of 2020.  But in the days that followed, we've also had Carrie Lam stating that the authorities will be "on full alert" to make sure museum exhibitions in Hong Kong are not undermining national security and Beijing mouthpiece Ta Kung Pao attacking the government-run Hong Kong Arts Development Council for approving grants to "yellow" organisations, including Ying E Chi, which owns the rights to screen the award-winning Inside the Red Brick Wall, after which the council issued a statement that it may indeed cancel grants made to artists who advocate Hong Kong independence.
Artist Kacey Wong (who graced in Evans Chan's We Have Boots political documentary which screened at the Rotterdam International Film Festival last year but has not had a fest screening here in Hong Kong, and probably never will) has voiced his alarm that an artistic crackdown in Hong Kong is imminent, if it's not begun already.  And it's worth noting that the screening of Where the Wind Blows at this year's HKIFF is still to be confirmed at the time of writing; a situation that hints of censorship problems being faced by this movie about four corrupt 1960s Hong Kong police officers and, honestly, the first time in my memory that such a thing has happened with an already announced HKIFF offering.
For many of the years that I've been a fan of Hong Kong movies, I've heard the cry and lament that Hong Kong cinema is dying or even dead.  Even while it's indisputable that there aren't as many Hong Kong movies being made these days as back in the last half of the 20th century, I still have found enough films to watch and like each year to feel that my favorite national cinema is still alive and worth following; with many of my favorite films of recent years being unabashedly local offerings (e.g., see my 2018 "top ten favorite Hong Kong movies" list) rather than Hong Kong-Mainland China co-productions.
With these new "developments" though, I find myself really worrying for the future of the Hong Kong cinema that I love.  More so than video piracy, lack of new artistic talent or the Wuhan coronavirus, political censorship -- which includes withdrawal of funding for film projects due to political considerations and the scarcity of venues that will screen a "controversial" movie -- is what could end up killing Hong Kong cinema.  And whither my beloved Movie Mecca then? :(
Posted by YTSL at 11:55 PM

I been getting DVD from library of smaller unknown film makers and companies. Been enjoying quite a few of them.
Coffee is on and stay safe

Feel free to list some of the films from unknown filmmakers you've been enjoying lately!