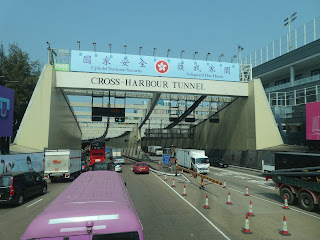 Government messages on an expensive signboard 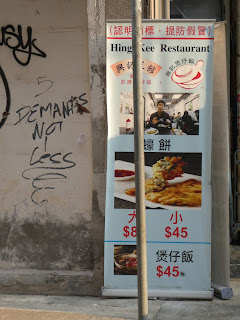 Message from the people freely scrawled on a wall
This has been the rare weekend where news from afar have actually upset me more than news of local developments in Hong Kong.  More specifically, I have felt particularly saddened by the news that has come out of Myanmar of more than 100 civilians, including children as young as 5 years of age, being killed by the military at pro-democracy protests yesterday and further news today of troops opening fire on mourners gathered for the funeral of one of the 114 people killed the previous day as well as their having burnt a man alive last night.  Oh, the humanity.  And yes, there have been global calls to stop the violence -- but little meaningful action.  (Surprise, surprise -- not really.)
In Myanmar itself, it appears that fear has turned to fury.  Not so long ago, many Hong Kongers felt anger course through their veins too.  Then the Wuhan coronavirus came to Hong Kong and people (temporarily) switched off their anger and put anti-government protests on hold to combat this new threat from Mainland China.  And, well, I'm not so sure that it's worked out for the best for Hong Kong.
To be sure, Hong Kong does appear to have put an end to the really lengthy fourth wave of the coronavirus which had its start back in November.  For the record: the territory reported zero local cases for the first time in more than four months yesterday and today has seen zero new local cases for the second day in a row.
But before people start getting too happy about this, it has to be pointed out that this "zero cases" run may well come to an end tomorrow since a preliminary positive case has been reported.  Also, the BioNTech vaccine issue that has caused the cancellation of a number of scheduled vaccinations -- despite both the makers of the vaccine and the Mainland Chinese firm that procurred it for Hong Kong believing there is no evidence to suggest that there is a risk to product safety -- is not looking close to being unresolved.
Oh, a 12th individual who had a coronavirus vaccine has now died in Hong Kong -- and even if it's decided by medical experts that the death was caused by pre-existing conditions rather than the vaccine, the fact of the matter is that news is still going to get me people worried about getting vaccinated.  So yes, there are many folks who are disposed to conclude that "Only in Hong Kong could the government create the greatest vaccination program on the planet, and still manage to fuck it up somehow"!
Some more developments which have people further disliking and distrusting the government: activist Andy Li remains missing despite having been brought back to Hong Kong along with seven others of the "Hong Kong 12" at the beginning of this week.  More specifically, Andy Li's family have been unable to trace his whereabouts, with Hong Kong's Correctional Services Department telling them that it has no one with that name in the system and the local police having said they do not know where Li is now.
Has Andy Li been spirited away inside the national security office over in Tai Hang?  Have "black jails" been established now in Hong Kong in addition to Mainland China?  Unfortunately, that possibility is no longer something that can be readily dismissed.
Back on August 26th, the woman who goes by the moniker Goose Lee over on Twitter Tweeted the following:

Pls don't think that things are returning to *normal* in Hong Kong. Every day teachers, medics, civil servants are being purged from the jobs, dissidents are being followed, school curriculums are removing critical thinking, gaslighting on an Orwellian scale. It's a horror show.

Another of her Tweets, this one from earlier that month remains valid too: "The Hong Kong government remains deeply unpopular. Please don’t think that we’re ok with our new authoritarian regime because we’re not out protesting in the streets." To which I will add: Don't think people have entirely stopped protesting.  Period.
Posted by YTSL at 11:58 PM

I suspect it's because everyone you know has been vaccinated with American vaccines (e.g., the Pfizer/BioNTech and Moderna). The majority of post-vaccine deaths in Hong Kong have been people who had the Chinese Sinovac vaccine.