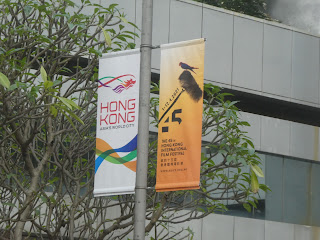 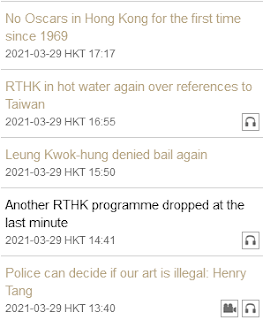 Put another way: the Hong Kong International Film Festival folks appeared to have taken pains not to foul afoul of the authorities.  And yet, the day has come when even they have been caught up in the net of the censors.  And, as it so happens, the announcement by the Hong Kong International Film Festival of the cancellation of one of this year's Opening Films has come on the very same day that it also was announced that this year's Academy Awards ceremony will not be broadcast on Hong Kong TV -- for the first time in 52 years.
Regular Oscars broadcaster TVB released a statement that "it was purely a commercial decision that we decided not to pursue the Oscars this year". But comments made about China by Chloe Zhao (that is is "a place where there are lies everywhere"), the Beijing-born director of Nomadland, nominated for six awards (including Best Film and Best Director), and the nomination of Hong Kong 2019 protest documentary, Do Not Split, for the Best Short Film Documentary, are believed to be behind the decision.
Another piece of news reported on today: West Kowloon Cultural District head (and loser in the bid to become Chief Executive back in 2012), Henry Tang, has said that it will be up to the police to decide if art displayed at the M+ museum violates Hong Kong's national security law.  So, yes, the arts are now being targeted for censorship and censure here in Hong Kong.
Meanwhile, in the "real world", it's been reported that political activist Andy Li is being held in solitary confinement in a psychiatric hospital in Hong Kong.  Which begs the question of which is worse: the possibility that he's really in need of psychiatric treatment (post experience behind bars in Mainland China) or that the Hong Kong authorities are using extraordinary means to keep him in forced "secret detention" prevent him from speaking to his family, lawyers, etc.?
Also, former Legislative Councillor -- and Security Law suspect -- "Long Hair" Leung Kwok-hung (whose 65th birthday it was last Saturday) has been denied bail today while fellow League of Social Democrats party member, Jimmy Sham, and another fellow Legislative Councillor, Claudia Mo, have had their bail applications postponed to a later date.  If truth be told, this outcome was not unexpected -- but, like with the Hong Kong International Film Festival Opening Film and Oscars broadcast cancellations, this says a lot about how much the situation of Hong Kong has deteriorated already and in a way that is so destructive to Hong Kong's cultural, social and political scene and life.
For those who need to be told in no uncertain terms what I'm observing, here's journalist Ryan Ho Kilpatrick's comment on RTHK's report of what Henry Tang said: "For years, Hong Kong has promoted itself as a global art hub. Now, the legality of artwork in the city will now be determined by a secretive, opaque new arm of the police accountable only to Beijing, and tasked making arrests for political crimes. Let that sink in for a moment."  Get it now?
Posted by YTSL at 11:43 PM