A more eventful Christmas Eve in Hong Kong than I'd like 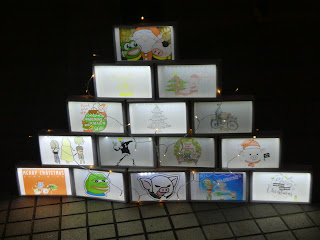 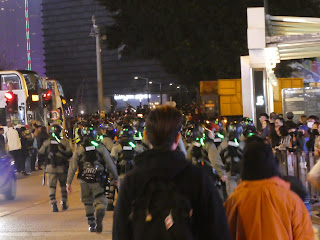 A significantly less festive scene
at Tsim Sha Tsui this Christmas Eve
I attended one of two protest rallies held in Central yesterday evening.  Despite some claims of its having been over 45,000 attendees, my own sense was that the rally in support of Spark Alliance, the crowdfunding platform for pro-democracy protestors that has had some HK$70 million worth of funds frozen and four associates arrested by the police, didn't attract that many more people than the rally in support of the Uyghurs held at the same venue (Edinburgh Place) the day before.
Happily, unlike with the previous day's event, last night's rally was not prematurely brought to a close by police actions.  And my sense was that yesterday's crowd was in an even more festive mood than that of the day before; helped in part by some of the protest displays temporarily erected in the area -- such as a rectangular blocks featuring Hong Kong protest imagery being erected in the shape of a Christmas tree -- marrying Christmas and protest themes.
As a matter of fact, I'd go so far as to suggest that the crowd at yesterday's protest rally was in a far more festive mood than the crowd that I happened onto when I turned onto Nathan Road while making my way to take a ride on the Star Ferry after having drinks and dinner with a friend in Tsim Sha Tsui earlier this evening.  And this even more so after riot police decided to fire tear gas in the area despite there being lots of tourists, other shoppers and festive revellers there!
Despite the organizers of a Christmas Eve protest march having cancelled the event (after the police had insisted that the event use an alternative route and take place at a different time to what had been planned), several hundred protestors showed up in Tsim Sha Tsui anyway.  I could be wrong but the fact that a good number of them were carrying Pepe the Frog and other plushies or dressed in a variety of interesting costumes gave me the sense that they weren't exactly planning to cause major havoc tonight.
But a few seconds after I had made my across Nathan Road and was standing in front of the venerable Peninsula hotel, a riot police officer made an arrest that involved his forcing his arrestee into a prone position right on Kowloon's main thoroughfare and then sitting on the arrestee.  Rather than cowing the crowd, it got a good part of it so incensed that they were howling at the police and demanding that the arrestee be let go.  After the riot police got the arrestee on his (or was it her?  I was too far away to tell) feet and was leading that person away, a good part of the crowd decided to follow -- at which point, I heard a loud bang and, shortly after, got confirmation that tear gas had been fired by way of my getting the noxious substance up my nose and in my eyes.
As I made my way to an area away from the tear gas, my prevailing emotions were that of anger and exasperation more than anything: as in, "how dare the police fire tear gas at us on Christmas Eve?!" Looking back, I think this is a sure sign of how tear gas encounters are no longer a surprise or shock -- because the Hong Kong police have become well known for their tear gas buffets and, also, since this was the sixth time that I had inhaled tear gas this year (with my first time having been back on August 5th).  And yes, it was in contrast to the obvious tourists who happened to be in the area; many of whom were looking about wildly or just plain uncomprehendingly and prone to stand stock-still in shock rather than scatter or walk purposefully away from the scene like the locals.

In my few hundred meters of walking to the Star Ferry pier, I came across four more teams of riot police.  Fortunately, I was out of Tsim Sha Tsui when the police decided to also unleash rubber bullets and pepper spray on people plus also brought in the water cannon truck.  But on my journey home, I could see that other parts of Hong Kong also were attracting the attention of the police.
Back on October 31st, the Hong Kong police sought to cancel Halloween.  Tonight, they are threatening to do the same to Christmas too. 'Tis the season to be jolly?  Not in Hong Kong this year, it seems -- though, thanks to the tear gas unleashed, it seems like Hong Kong may be getting a white Christmas of sorts in 2019!
Posted by YTSL at 11:59 PM