Staying on message amidst conditions that verge on the schizophrenic 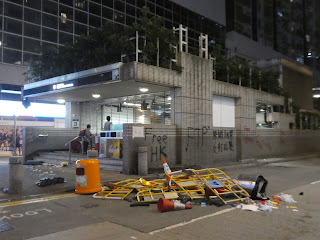 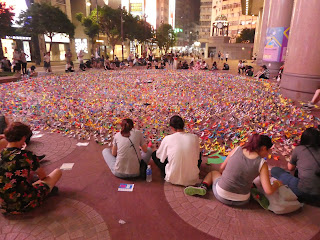 Look at the two photos at the top of this blog post.  Would you believe it if I told you that they were taken within half an hour of each other and in parts of Hong Kong that, on a normal day, would be just three minutes ride away by MTR from each other?  Throw in the fact that both the mess seen in the top most photo and the colorful paper cranes in the second photo are indeed the work of anti-extradition bill/pro-democracy protesters and it really can make the current situation feel hard to fathom.


Then there's the high probability that tomorrow, things will go back to "normal" -- or feel "normal" in that it really would be very shocking indeed if there were any violent clashes between protesters and the police on the scale that occured earlier today.  (A note: this is not because, in contrast to today, there are no protests planned tomorrow but that the two that have been the most widely publicized are variants of the peaceful Hong Kong Way.)

With such extremes being experienced regularly this summer, it's actually a wonder that Hong Kongers have not turned schizophrenic.  Instead, people have been remarkably consistent in terms of our messaging of "Five demands; not one less" and will to keep on protesting; this even when the authorities seem not only determined to not listen but also silence those who seek to make their voices heard and resist Chinese authoritarianism -- not only for themselves but for others too.
Posted by YTSL at 11:59 PM

When word schizophrenic was brought up I thought it was going to be on our President.
Coffee is on

I have more suitable words for your President but will leave them to your imagination for now... ;)