Over here in Movie Mecca 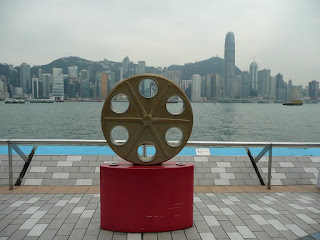 Hong Kong skyline and a sculptural tribute
to one of the territory's great industries
There's many a day in which I think I'm living in Movie Mecca. This is not least because Hong Kong is not only home to the Hong Kong International Film Festival but also a place where many other -- even if smaller -- film festivals and specialist film programmes (frequently organized by the invaluable Hong Kong Film Archive) abound throughout the year. And a wider choice of film programming is regularly available in non-repertory cinemas than has been so in most, if not all, of the places I've previously lived.

A case in point: The past three days has seen me able to take in screenings of an interesting contemporary Hong Kong documentary (Tammy Cheung's Election (2008)) at the Broadway Cinematheque, Japanese film classics in Yasuzo Masamura's Giants and Toys (1958) and Nagisa Oshima's A Street of Love and Hope (1959) at the Hong Kong Film Archive, and another notable Japanese film in Kon Ichikawa's The Crowded Streetcar (1957) at the Hong Kong Arts Centre.

But as if this weren't already enough to make me a very happy movie buff (or, oh alright, geek!), there's also many a day that I feel like Hong Kong is a giant movie set or lot. And it's not just because there are quite a few places in Hong Kong that I recognize from having seen them appear in a movie or more. Rather, it's that, increasingly, I also spot places I know and previously had been to on the big screen when I go and take in a new movie! Then there are the celebrity spottings. And not just on occasions like film premieres and such either.

So frequently has this been the case that I have to admit to having lost count of the number of these happenings plus no longer being able to recall each and every personality I've seen since moving to the Fragrant Harbour! For all this though, it's true enough that even while my previous job additionally gave me lots of opportunities to meet and interview movie folks, it often seems more of a thrill -- and sometimes downright magical -- for me to spot familiar faces when, and in places where, I didn't expect to.

In any event, the fact of the matter is that, for these and other reasons, there really have been quite a few days since moving to Hong Kong when it doesn't only feel like I'm living in Movie Mecca and/or a giant movie set but, also, that I'm actually living *in* a movie -- period... and, yes, I do consider myself so very fortunate to be doing so. :)
Posted by YTSL at 9:30 PM

For some reason, I would expect people to at least stare at, or pester for an autograph, Sandra Ng and Josephine Siao.

Thanks. And as a follow up to another of your comments: People do briefly stare as these folks walk by -- but have never seen anyone pester them, when they're not in an official capacity, for autographs or such.

Thanks... but hope you got much more than that from my post! ;(

Nope, no Anthony Wong Chau Sang sightings as yet. Someone else I've seen that may interest you though is Christopher Doyle (at an Edward Yang film screening). ;b

Whenever I visit HK, I try to keep my eyes open to hopefully spot a recognizable celeb. I don't know too many so makes the chance of such things happening even slimmer. heheh.

The time I briefly walked with Chow Yun Fat in CWB to a nearby restaurant, that was something magical. Kinda makes me wonder, did it really happen? haha.

Even now, I often have to have other people point out celebrities to me. It's still too surreal to me to see these people just wandering about Hong Kong. Some personalities are really hard to not notice though -- notably Bobbie Yip! ;D

Do you ever go up to them and tell them how much you've enjoyed their work? And recount obscure films they've done that they think no one would remember? I'm sure they'd like that.

I generally don't do that with people I see out and about in Hong Kong doing/minding their own business. Figure that they'd value their privacy more than my fan-gushings.

OTOH, there have been people I met in a professional capacity whom I've told how much I like their work. (Among these: Raymond To, Peter Chan Ho Sun, Roy Szeto and Yau Nai Hoi).

I used to do that all the time whenever I saw an actor I liked in New York. You never know when or if you'll ever see them again. And most of the ones I stopped and talked to have since died. The ones who don't want to be approached usually put up facial expressions or body language to let you know not to talk to them.

I wonder whether it's a cultural thang to think that a personality would prefer to hear praise from you rather than be allowed to have his/her privacy. Am leaning towards that idea especially after discussing this with a Hong Kong friend earlier this evening. Having said that, she admits to not being able resisting (surreptiously) snapping a picture upon seeing Ti Lung ice-skating (well) in public sometime back... ;b