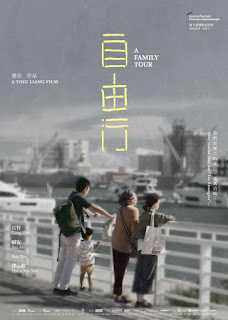 
This expertly crafted dramatic offering from a Mainland Chinese filmmaker living in exile in Hong Kong (after this 2012 film, When Night Falls, ran afoul of his home territory's authorities) largely takes place in Taiwan.  Considered a renegade province by Beijing but independently ruled by a democratically-elected government, the territory has figured in films (such as Stan Lai's The Peach Blossom Land and Wang Quanan's Apart Together) which show loved ones torn apart by the Communists coming to power over in Mainland China.


In Ying Liang's A Family Tour, however, Taiwan is where a family gets to reunite -- albeit for only a  limited time and under less than ideal circumstances.  After filmmaker Yang Shu (Gong Zhe) is honored with an invitation to take part in a film festival in Taipei, she and her husband, Cheung Ka Ming (Pete Teo, who I previously knew primarily as a singer-songwriter), hatch a plan to meet up with her mother -- who she has not seen in the flesh or spoken with for some four years now -- in the Taiwanese capital.

In a perfect world, Yang Shu's mother, Chen Xiaolin (Nai An), would have gone to Taipei to view her daughter's film.  However, Yang Shu incurred the wrath of her country's authorities by making that particular work which now was going to be screened in Taipei and had to leave her native Sichuan -- where her widowed mother continues to reside -- and move to Hong Kong, the birthplace of her husband, and now also their young son (Tham Xin Yue).


Bidding to get together away from the prying eyes and ears of the Communist Chinese authorities (whose influence on Hong Kong, it is noted, has been noticeably increasing), Ka Ming books Xiaolin on a group sightseeing tour and arranges for himself, Yang Shu and their son to unofficially tag along on a taxi and meet the older woman in publicly accessible tourist attractions, hotels and restaurants.  Things gets further complicated -- and stress levels significantly increased -- early on after Yang Shu realizes that her mother is significantly less healthy than she was when they last were together and, also, that the authorities had paid the older woman at least one disturbing visit in the intervening years.


There's no hiding how sad the story told by A Family Tour is -- and one's heart threatens to break even more upon realizing that it is rooted in fact, personal and semi-autobiographical.  At the same time though, because the mother and husband of the filmmaker in this touching offering come across as truly loving and caring, one comes to see the circumstances that the family in focus as tragic but not the individuals concerned and their lives.


The first film made by Ying Liang as an exiled filmmaker, A Family Tour represents an admirable act of resistance.  A cinematic tour-de-force, this poignant offering shows the sacrifices that some people need to make in order to do and continue doing what they think is right, and also for their loved ones -- some of whom they may end up having to live far apart from but will always be in their hearts.