Another disastrous proposed piece of legislation for Hong Kong :( 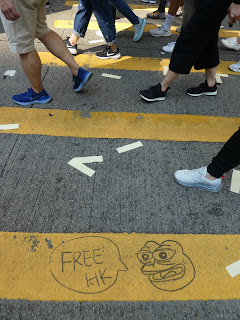 Spotted on a Hong Kong road (and lest it not be clear,
Pepe the frog isn't seen the same way here as in the USA) 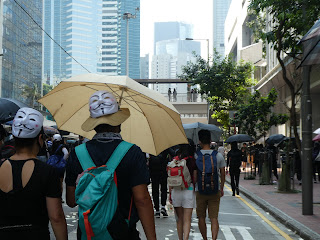 Umbrellas, face masks and black attire are
regular parts of the Hong Kong scene, protest or not!


I had hoped that things would calm down somewhat after the tumultous October 1st we had in Hong Kong; one which saw the local police force set new single day records for number of arrests (269), projectile rounds shot (over 1,300) and tear gas cannisters fired (circa 1,400) and play a big part in ensuring that Hong Kong rained on China's anniversary parade.  But the shooting at point-blank range of a teenaged protester with live ammunition by a police officer ensured that tensions would stay high and protests continue over the next few days; with still more areas of Hong Kong being added to the list of those where tear gas buffets have taken place, notably at the largely residential area of Tai Koo Shing last night.

Things were not helped by news having spread like wildfire yesterday of the Hong Kong government planning to invoke emergency laws to introduce a ban on the wearing of face masks at protests.  Among the reactions was this tweet from South China Morning Post reporter Chris Lau: "Just some thoughts and facts in perspective: If the anti-mask law goes through, it means the government thinks it's actually easier to evoke an emergency law than simply answer to the protesters' demand to have an independent commission of inquiry to get it over and done with".

And a Citizens' Press Conference organized by anti-extradition bill/pro-democracy protesters, a group spokesperson said: “We are not afraid. The Carrie Lam regime can’t frighten us off. The pro-government people like to boast that there are also anti-mask laws in overseas countries. It is laughable. Those are democratic countries. How can Hong Kong, a place where there is no democracy, compare with those countries?”

Despite rational-thinking people looking upon the proposed move by the government as  downright farcical -- to the point that some of us couldn't believe it would happen -- and inevitably going to add more oil to the fire already burning in Hong Kong, Hong Kong's most unpopular Chief Executive ever went ahead and announced this afternoon that a Face Covering Regulation would come into effect at midnight tonight.  Because of the way she's gone about doing things, legal challenges are inevitable -- and at least one person has announced the mounting of a legal objection to this regulation.

In the meantime, more protests and unrest have erupted across Hong Kong today.  (A good sense of how widespread the disruptions are can be seen by way of the entire MTR system being down tonight.)  And you know that the shooting of a live round into yet another schoolboy by a policeman tonight definitely is going to cause more blood to boil and flow beyond midnight and probably also well past the weekend. :(
Posted by YTSL at 10:43 PM

Hi! I stopped by tonight to leave an announcement for you. I saw your blog's name on a linky in 2007 during BlogBlast For Peace (Dona nobis pacem in the Blogosphere). We hope that you will consider joining us again for Blog4Peace 2019. We are still blogging for peace.

Dear Peace Blogger,
We invite you to Blog4Peace on November 4, 2019. Your peace globes and powerful words have inspired people all over the world. Go to blog4peace.com to get a peace globe template or find us on Facebook. We hope to see you again on this incredible day in the blogosphere. Please share and invite others!

Peace to you and yours,
Mimi Lenox, Founder Blog4Peace

Thanks for stopping by. I've made a note of this year's Blog4Peace date and will participate if there aren't more pressing issues close to home that I feel a need to blog about on that date. At the same time though, I'm sure you've noticed that a lot of my blog posts this summer are ones where I do indicate a preference for peace rather than violence or unrest -- it's just that I want justice to prevail in Hong Kong too!