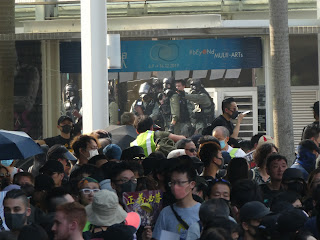 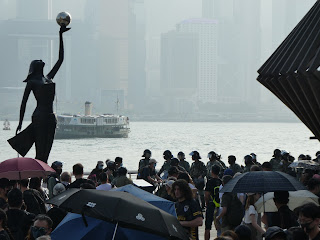 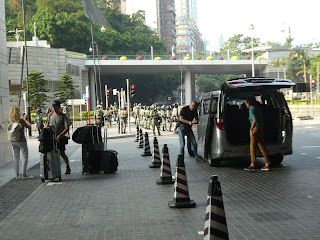 Not a sight people want to see in front of the
ritzy hotel they have just arrived at!


Among the headlines that caught my eye this morning was one trumpeting the following: Hong Kong police to rehire 1,000 retired officers to cope with anti-government protests.  What with their ranks have already been swelled by members of the Mainland Chinese security force, this seems: at best, to be unnecessary; and at worst, to be an act of provocation that is only going to make the overall situation in Hong Kong worse rather than better.


Yes, the police did blame a staff crunch -- along with threats to police safety -- for the cessation of foot patrols back in August.  But Hong Kong actually has long been one of the world's most policed territories; with the second highest police to citizenry ratio in the world; this even without taking into account the not-yet-officially-confirmed but pretty evident Putonghua-speaking recent Mainland Chinese additions.  And, honestly, it's not like the cops -- especially those dressed in green and black riot gear rather than the blue uniform I previously was more familiar with -- are all that scarce on the ground these days.


I wish it were otherwise but these days, it's not all that unusual any more to come across teams of cops -- and in riot gear to boot -- inside such as MTR stations and upon coming out of a bar, never mind at protests and while making one's way home from one.  And this afternoon, it felt like Tsim Sha Tsui was crawling with riot police: with whole groups of them to be found at the Star Ferry pier, by the Clock Tower and nearby waterfront, by the Hong Kong Space Museum, at the Avenue of Stars, and so on and so forth.


A protest rally was called to take place at Salisbury Garden.  As befitted its "Stand with Journalists" theme (prompted by police harassment of journalists, particularly the previous weekend), it saw protesters and journalists gather in the same section of Tsim Sha Tsui.

Also in the crowd were people who looked like tourists sympathetic to the Hong Kong's pro-democracy protesters' cause and a few curious onlookers.  And there too were the very unwelcome police who: before I got onto the scene, had already threatened the peace by insisting on checking some people's bags; and about half an hour after I arrived in that area, decided to treat the assembled crowd to a tear gas buffet.

I really should stop being shocked at what the police do these days but today's protest venue really did appear to be an unlikely one to have tear gas be fired into it.  We're talking, after all, about a prime tourist area, located in the vicinity of local landmarks like the Hong Kong Museum of Art (due to shortly re-open after a three year refurbishment), Hong Kong Space Museum, Hong Kong Cultural Centre, and iconic and super luxurious Peninsula hotel (the last of whose lobby ended up being filled with escaping protesters and tear gas)!


Adding to the surrealness of it all was that this area is one with a number of food trucks and stands -- one of which quickly drew down its shutter as the riot police advanced; another of which remained defiantly open -- and luxury stores.  More with regards to the latter: Thus it was that as my friends and I sought to get out of tear gas range, I couldn't help but notice brand names like Cartier and Gucci loom large over the whole affair!

On a more serious note: the way the riot police were pressing in, I found myself worrying that they wanted to push us into Victoria Harbour, the crowd (which included -- as is normal for a Hong Kong protest -- parents with young kids, the elderly and wheelchair-bound) would panic in their haste to get away and stampede, or both.  Fortunately, neither of those nightmare scenarios occurred -- but it's no credit to the police that this was the case; this especially since, as has become usual with the cops here, they also looked to have sought to disperse the crowd without providing a clear route for the crowd to disperse.


Some of the people who streamed over to Tsim Sha Tsui East appeared to have been met there with more tear gas since I came across people coughing and with streaming eyes.  Calling on my knowledge of the area's streets, I managed to walk from Salisbury Garden over to the Cross Harbour Harbour Tunnel bus stop without further incident though -- and was on the other side of Victoria Harbour when one of the police water cannons arrived at the scene and ended up also being employed against people who had assembled this afternoon for a peaceful protest.

In the hours that followed, there were reports of the police aggressively pursuing fleeing protesters to a number of other areas of Hong Kong.  Almost inevitably, protesters and police clashed later in the day and into the night (resulting, among other things, with more tear gas fired -- including right into a pharmacy in Mongkok and enveloping a passing bus in that same area of Kowloon).

In the off chance that the following was unclear: Yes, I think the police have grossly over-reacted yet again; and yes, I really do believe that if the police had not been there to stir up trouble, today's protests would have been peaceful -- like the one on June 16th with two million participants was able to be, thanks to the police presence that day having been not just restrained but actually invisible.

These days, however, it often seems that the police want to suppress protests -- regardless of whether they are violent or not -- far more than they actually want to keep the peace.  And in so doing, they just make people more resolute in wanting to voice their dissent, and in their disapproval of the police in particular and government in general.
Posted by YTSL at 11:59 PM

Thank you for reading and also for the compliment! :)