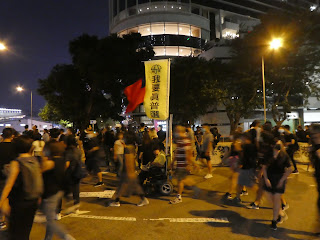 "I want genuine universal suffrage"; still a valid sentiment
five years after the start of the Umbrella Movement 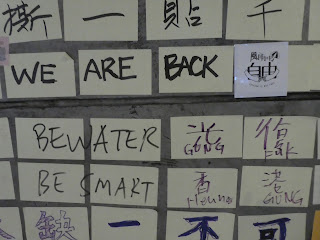 Old and new protest slogans placed side by side 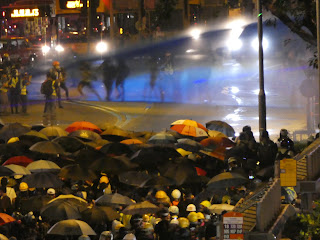 Blue spray from a water cannon shot onto Harcourt Road


Five years ago this very day, I happened to be having a meal at Admiralty with a friend when  Harcourt Road was occupied for the very first time.  Upon leaving the restaurant (the much beloved Dan Ryan's which used to be in Pacific Place), we saw that Queensway was empty of vehicular traffic and couldn't resist going and seeing what was happening closer to the Central Government Complex.


Even so, I actually didn't feel compelled to join in what was then billed as the Occupy Central with Love and Peace protests because it had all sounded rather wishy washy to me.  Rather, like many hundreds of thousands of others, I only decided to take part in what later grew into the Umbrella Movement because of the police having over-reacted to protest actions and firing 87 rounds of tear gas into the crowd at Admiralty later that day.


Although the "occupation" of Admiralty and certain other parts of Hong Kong ended 79 days later, the Umbrella Movement did not die on December 16th, 2014 (despite quite a few people thinking that was the case).  The promise of "We'll be back" really was not just bravado; with pro-democracy protesters returning to the fore and scene with a vengeance this summer -- and you just knew that the fifth anniversary of the beginning of the Umbrella Movement wouldn't pass by quietly.


Earlier this evening, Tamar Park was filled to the brim for a rally to mark that anniversary and also continue with the pro-democracy movement that the extradition bill protests have given added impetus to.  Organized by the Civil Human Rights Front and issued a Letter of No Objection by the police, it got going at 7.15pm and was scheduled to only conclude at 9pm but ended up breaking up early at the request of the police -- who, even before the rally had got going (and I arrived at the area), had already pepper sprayed some people at Admiralty.


For much of the approximately one and a half hours that I was at Admiralty this evening, the scene was largely peaceful -- with people doing such as listening to speakers at the rally (who included Occupy Central's Benny Tai and the Umbrella Movement's Joshua Wong), putting up posters at the location of Hong Kong's original Lennon Wall and nearby areas, and strolling about checking out the creative work of others.  At the same time though, it's true enough that Harcourt Road was "occupied" again fairly early on in the evening with people who wanted to emphasize that the pro-democracy movement is indeed "back" and alive, and that they are not planning to let it die easily and soon.


When gauging the mood about me, I got the sense that the police had not yet learnt the lesson of September 28th, 2014: that their violent over-reaction actually can get far more people onto the streets and out to defy them and the government than actually cow people into staying meek, "neutral" and at home.  And it thus seemed but an inevitability that they would turn their weapons against the protesters: with water (including the now infamous dyed blue -- and mixed with pepper spray -- liquid shot out of water cannons) along with still more tear gas.

Sadly, what's also par for the course these days -- which actually is different from the Occupy days of 2014 -- is that, after the legal rally's end, and much of the crowd had melted away, like water, the police would go hunting for protesters as far away from Admiralty as Causeway Bay -- and even stop and get onto buses and trams, and ordering their passengers off to be searched for evidence of their having taken part in violent clashes this evening.  Oh, and the cops' transport of choice tonight was, of course, the MTR.

I wonder what would have happened to me if the bus I took home this evening had been stopped by the police and I had been subjected to a search: for at Admiralty this evening, a friend had given me goggles and a mask to better protect myself against the tear gas that I can personally vouch to the police being wont to fire these days even when a protest isn't actually taking place.  Although they have yet to be used by myself, would their presence in my backpack have been taken as evidence of my being a radical protester who resorts to violence in the eyes of the local constabulary?

Also, while I didn't dress in black today (a color I avoid wearing in the hot Hong Kong summer), I was wearing a t-shirt whose "Umbrella Revolution" design had been screen printed on an "Occupied" road back in late 2014.  And, of course, also in my backpack was an umbrella which may be designated as a weapon by paranoid police officers but really is a "must have" (to protect against the rain, sun and, latterly, over-reacting police officers) for any self-respecting Hong Konger whenever they venture outdoors!
Posted by YTSL at 11:59 PM