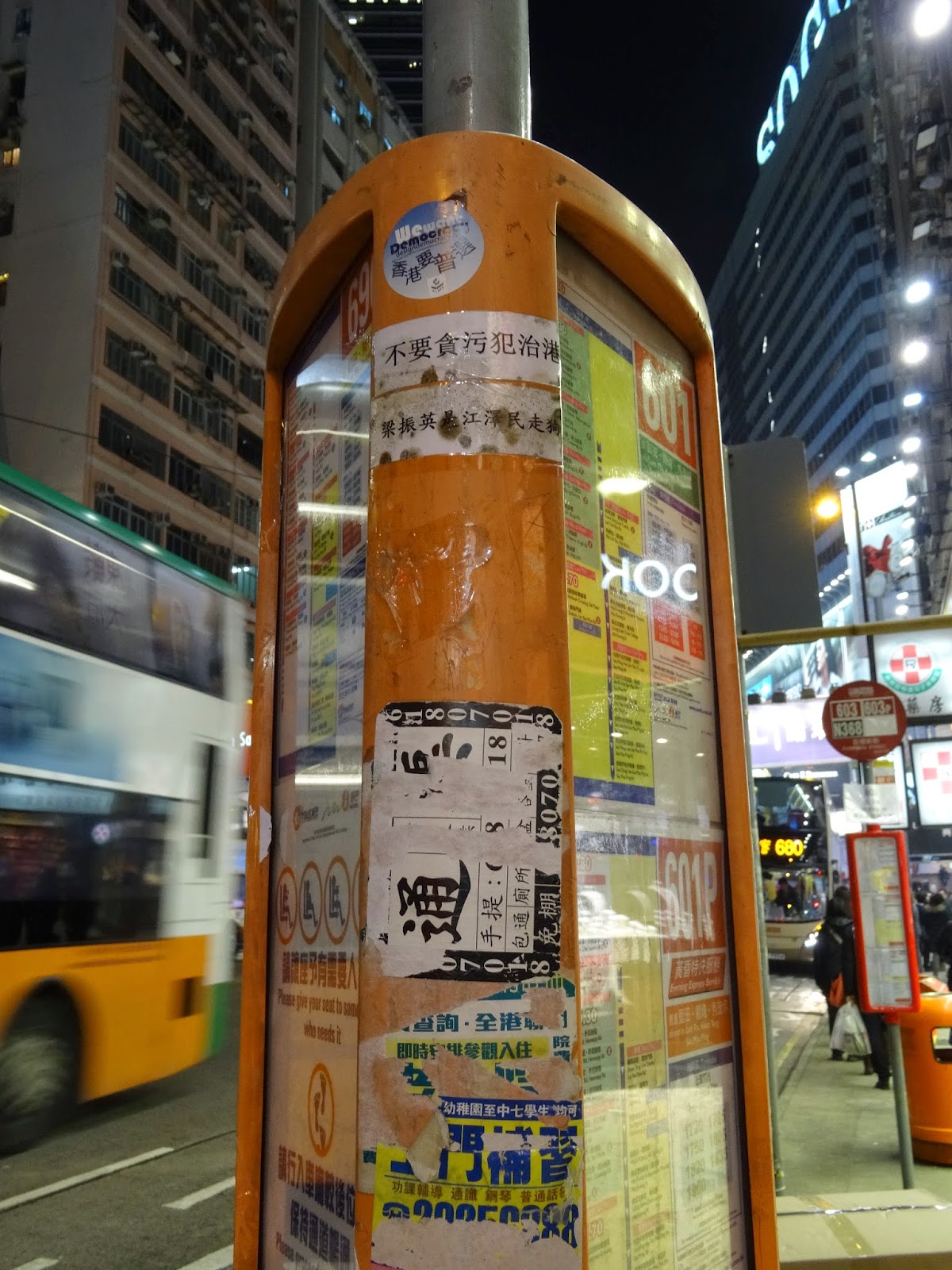 Looks like Causeway Bay's back to what it was before
the Umbrella Movement happened? If so, click to
enlarge the image and look at the top-most sticker! 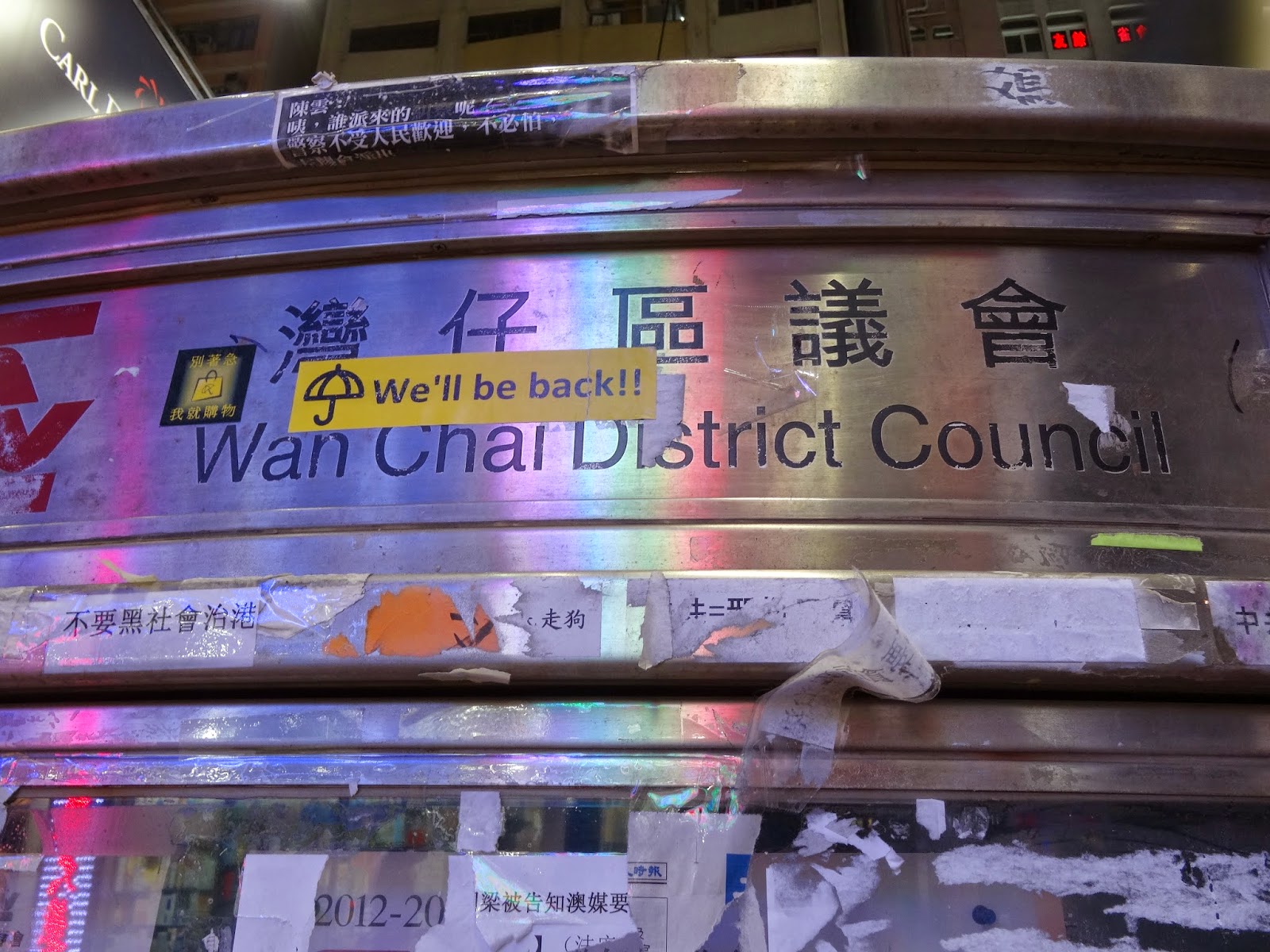 
After dinner at Causeway Bay this evening (on a day when, inspired by the earlier Occupy Lion Rock action, a new pro-democracy banner was hung on Victoria Peak), I couldn't help going once more to the area where Occupy Causeway Bay was until yesterday morning.  At first glance, everything seemed like it had gone back to pre-Umbrella Movement times -- and that it was like the Umbrella Movement had never happened.


But look more closely and you'll see signs that things aren't entirely like they were some three months or more ago -- and even if all those stickers do get removed from the area, there are mental images indelibly etched in the minds of many people; ones that make it so that, say, it's hard to look at umbrellas (be they yellow or otherwise) in quite the same way again, etc.  And yes, it's also true that when I'm in spaces such as the MTR, I can't help but look around me and wonder who in the crowd I may have previously passed by at the protest areas at some point in the past 11 weeks ago...

On the subject of the past: it's interesting how the sight of Umbrella Movement participants here in Hong Kong conjured up images and memories of particular major events that took place in mainland China last century for many.  For a large percentage of the non-students who decided to join the Umbrella Movement after September 28th, it was the spectre of June 4th that loomed most.  But for certain others who stressed that they wanted order rather than chaos in the streets and greater society, there was a fear that the Umbrella Movement's student participants were like the contemporary Hong Kong version of the Cultural Revolution's Red Guards.

Ironically, I think that Beijing and its supporters may have fanned the flames with regard to the latter.  Even more ironically, the authorities may have had a(n inadvertent) hand in making a number of protesters go from having the non-violent likes of Mahatma Gandhi and Martin Luther King as their primary role models to Malcolm X in his angriest and most radical phase.

Hi YTSL! I'm only now catching up on your posts from the past couple of weeks.

First off, congratulations on your permanent residency! I'm so happy for you. :D

It's sad of course to see the occupied spaces disappear, but like you say the after-images will remain in people's minds for a long time and will continue to inspire in unexpected ways.

I was pleased with the way the occupation ended -- in an atmosphere of non-violence, a celebratory mood, and with a vow to return.

And I hope to see more creative and peaceful acts of disobedience (like the wonderful "shopping" trips) in the future.

Looking forward now to your regular postings about your hikes and travels. ;)

Good to hear from you again -- and that you'll be continuing to visit to check out my hiking and travel posts. :)

And yes, long may memories of what happened in the protest areas inspire.

YTSL,
sadly..HK is becoming a Police State given the surveillence cameras installed on top of buildings with facial recognition...

now Reuters expose just exposed PRC Ministry of State Secrets (MSS) have a lot of teams (all partnered with former HK surveillence police officers) monitoring those who PRC China doesn't like and trying to find dirt to use against those who doesn't toe the PRC CCP party line...

you may be followed by one of these teams...

To quote the words of one poster seen at Occupy Mongkok: please do not feed the fear.

YTSL,
I just read a Reuters special investigative report about it describing exactly what I posted above...want me to send you the link?

are you aware that the bulk of the leaders of the CCP (including Pres Xi, Pres. Hu) have hundreds of billions USD offshore in BVI and Cayman islands?

are you aware that China just voided the Sino-British Joint Declaration? (UN Treaty)

I've read that Reuters report (and reports in The Guardian, etc.) but I'm just a super small potato in the Umbrella Movement. They can't -- and won't -- zero in on EVERYONE!

Please don't help fan the fear they want to perpetuate, and thus do their job for them. It's like with the terrorists: if people get so afraid they are cowed like the terrorists want them to be, the terrorists will have already won.