Despite temperatures reaching a high of 34 degrees Celsius (93.2 degrees Fahrenheit) in Hong Kong yesterday, the Mid-Autumn Festival was celebrated throughout the territory.  To mark the occasion (and also show their determination to continue their protesting), some intrepid folks hiked up Lion Rock and formed a human chain a la the Hong Kong Way. A human chain also was formed up on the Peak last night while still others took advantage of the evening's peace to enjoy a special night out in Hong Kong.

For my part, I felt the Tai Hang fire dragon -- which makes its annual appearance the night before, of and after the Mid-Autumn Festival -- calling to me once more yesterday evening.  So, after an early dinner with a friend, off I went to a part of Hong Kong that turned out to be less crowded than usual when the fire dragon pays a visit this year; thanks in no small part to the ongoing protests having scared off a good number of visitors, especially Mainland Chinese tour groups.  And because the area was not so packed as it has been in recent years, I think I got some of my best shots ever of the traditional harbinger of good luck last night as well as got gifted an incense stick off the fire dragon for the first time ever! :) 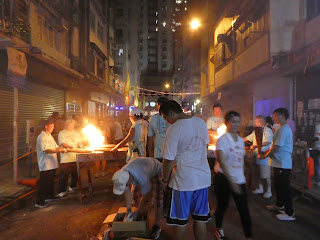 Follow the incense and smoke to catch sight not only of
the fire dragon but the actual acts involved in assembling it! 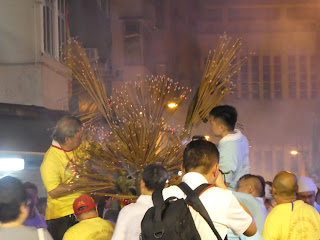 An estimated 70,000 incense sticks are needed, along with large
amounts of straw and twine, for the construction of the fire dragon! 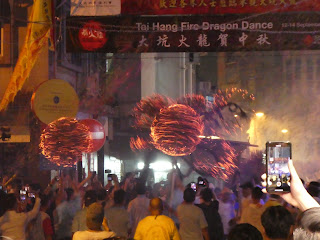 Great balls of fire!  The fire dragon on the move,
in pursuit of two fiery and large "pearls"! 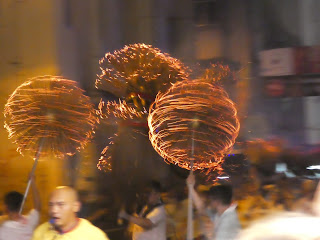 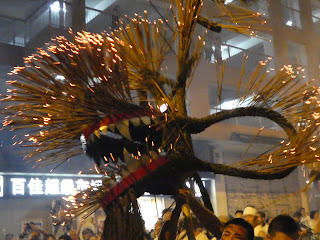 Hundreds of lit incense sticks on a 70 kilogram head with
electric powered eyes and teeth of sheet metal make for
an awesome sight, especially when viewed up close! 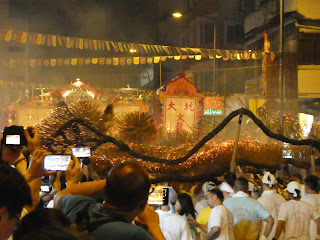 The fire dragon's 67-meter-long body is plenty impressive too! 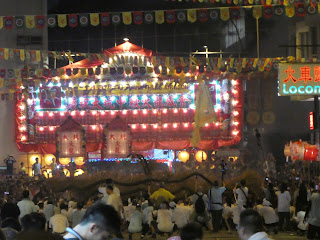 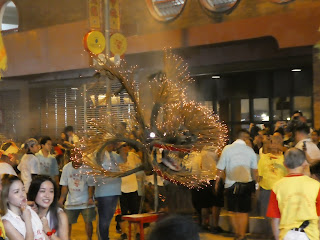 The head of the fire dragon at rest is still pretty spectacular
-- but just imagine it in motion... or make a point to
come over and see it  for yourself some time! ;b
Posted by YTSL at 9:45 PM

With all those incense burning I bet a few eyes were watering.
Coffee is on

Mine certainly were at one point when the fire dragon got too close for comfort!

From experience of seeing the Fire Dragon in close quarters, spectators in the first few rows are usually showed by the ashes, or being attacked by incense sticks being thrown at you (owing to the spinning and other acrobatic moves), which may also further cause minor burns if they hit your exposed skin.

I've been showered with ash by the Tai Hang fire dragon in years past but I've never been "attacked" by its incense sticks -- and hope I never experience it!