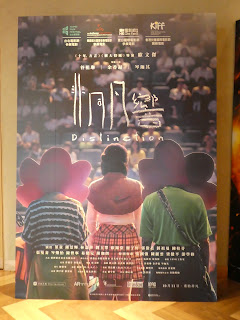 Award-winning filmmaker Jevons Au's
first solo directorial effort
Distinction (Hong Kong, 2018)
- Jevons Au, director and co-scriptwriter (along with Ashley Cheung and Chung Chui Yi)
- Jo Koo (aka Jo Kuk), Jennifer Yu, Kaki Sham, Tse Ka Long, Rain Lau, Dominic Lam, Cecilia Yip, Chung King Fai
Hong Kong cinema is not a genre!  This is something I had to tell many a friend when I was living in the US who mistakenly -- and disparagingly -- assumed that my Hong Kong movie diet was limited to "chop-socky".  And this is something I was shocked to have to point out just a couple of weeks ago to an expat friend of a friend who somehow has managed to be a resident of the Big Lychee for 14 years, yet not realized the variety and quantity -- never mind quality -- of cinematic offerings that have been produced by Hong Kong filmmakers for so long now.
To be sure, Hong Kong cinema has produced lots of martial arts movies and crime dramas/actioners/action-dramas over the years. But its output also includes Chinese New Year comedies, gigolo comedies and prostitute dramas -- distinctive sub-genres that seem specific to this film territory -- along with film that fit into more conventional categories!  And in recent years, it seems like education-centric offerings also may be becoming a thing -- with the makers of such as My Voice, My Life (2014), Little Big Master (2015), Big Brother (2018) and now also Distinction electing to shine a light on students, teachers and the flawed local education system.
After working on a dystopian drama (Ten Years) and a dark crime drama (Trivisa) which led to his being described as both a critic of Hong Kong as well as one of its most fearless advocates, Jevons Au has produced a solo directorial debut effort which shows how much he worries and cares about his home city.  A social drama about a bunch of individuals coming together to put on a school musical, Distinction delves deep to examine Hong Kong's distinction-chasing -- but at what cost? -- educational system but also local socio-cultural attitudes that lead to people often under-valuing the abilities of mentally challenged people and others who think outside the very small box that's deemed to be "normal" and "proper" in a city where consumerism and the seeking of material success is rampant.
Jo Kuk headlines the movie as Grace Chui, a teacher in a Special Educational Needs (SEN) school tasked with organizing a musical to showcase her school's students with the help of volunteers, including students from other schools, some of whom approach the project with better attitudes than others.  Shown early in the film seeking jobs in more "regular" schools, she is an all too human character rather than saintly teacher who threatens to break your heart both when she tells her husband why she doesn't want to have children and, also, after she finally starts to believe the sentiments expressed in the lyrics she composes for the musical.
Although they are among the group of students who are supposed to help with this project rather than be helped, hard-working Elite School student Zoey (Jennifer Yu) and tough-acting Band 3 school student Ka-ho (Kaki Sham) are soon revealed to be have problems of their own; with their well-meaning but mis-guided parents often contributing to their offsprings' troubles.  The further one goes into the film, the more the both of them will win your heart -- and the more you hope and wish that they will follow their dreams and be rewarded, rather than penalized, for doing so as well as being far more open-hearted and -minded people than many others would be in their circumstances.
I hope that Jennifer Yu and Kaki Sham will continue to get meaty parts like the ones they had in Distinction because they've shown here how good, not just promising, they are already (in Jennifer Yu's case, by portraying a character here who's well nigh unrecognizable from the one she essayed in Men on a Dragon).  And while pretty much everyone in this cast (who included the veteran likes of Cecilia Yip and Chung King Fai as members of Zoey's family, and Rain Lau and Dominic Chan as Ka-ho's parents) did yeoman work, special mention needs to be made of amateur actor Tse Ka-long, who absolutely melts hearts -- and got tears pouring down my cheeks on a couple of occasions -- as Ka-ho's younger, special needs education-requiring brother who can teach others some valuable lessons about life and humanity if they just pay attention.
My rating for the film: 8.0
Posted by YTSL at 5:06 PM

Sounds like a good family film. I read somewhere that it is banned in China. Any clues as to why?

I wouldn't be surprised if Jevons Au and anything by him is blacklisted by the Mainland Chinese authorities... Ironically, there's a sympathetic Mainland Chinese character in "Distinction".