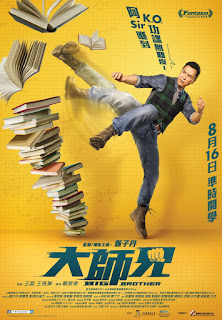 There are many things about Big Brother that long time movie fans will have already seen before. A teacher new to the field whose professional background is very different from that of regularly appointed secondary school teachers?  To Sir, With Love.  A teacher with unorthodox pedagogical methods and a good heart who, against the odds, manages to win over -- and even inspire -- his students? Dead Poet's Society.  Heck, tell Hong Kong cinema fans that you've seen a movie about a super caring educator set in Hong Kong and saddled with a title that makes it sound more like a kung fu film and thoughts may well turn to Little Big Master from just three years ago!

At the same time though, it's not often that one sees an action star like Donnie Yen playing a teacher and it also is rather uncommon for a teacher to be, like his Big Brother character, a crack soldier turned dedicated educator.  A man with a chequered past (some details of which get revealed over the course of the movie), Donnie Yen's Henry Chan is assigned to teach liberal studies to a class filled with a failing school's problem kids but also makes it his mission to convince them that there's value in a school education and that academic success can lead them to a better tomorrow -- even if they are, say, an impoverished orphan (Jack Lok), a member of an ethnic minority (Gordon Lau), a girl (Gladys Li) rather than the boy her father evidently prefers, and the sons (Bruce and Chris Tong) of an alcoholic widower.

A hard task is made all the more difficult when one of Henry Chan's students decides to drop out of school and join a gang whose dai lo (big brother) (Yu Kang) is tasked by his boss to get the school shut down so that its land can be re-developed.  (What a very Hong Kong idea this is!)  Almost needless to say, this sub-plot gives the movie's big star a couple of opportunities to showcase his ability to kick ass and put his personal stamp on a film that, in terms of his willingness to mix genres, felt like an old school Hong Kong movie (or, at least, one spiritually akin to those churned out in the hundreds during the mid 1980s through to mid 1990s that I consider to be Hong Kong cinema's most recent Golden Age).

For all of Big Brother most definitely being Donnie Yen's show though, the younger members of the cast get opportunities to shine -- and it is to their credit that they go ahead and make the most of it.  Indeed, I'd go so far as to say that a number of the youngsters actually outdo the movie's biggest star in the dramatic stakes, with at least a couple of the sub-plots and dramatic scenes in which they are prominently figure successfully drawing tears from my eyes.

Even more admirable is the decision of the makers of Big Brother to not turn a blind eye to the problems to be found in Hong Kong's educational system, ones so systemic and serious that student suicides have become not at all unexpected events even while surely being avoidable tragedies.  For even while Henry Chan, the "Big Brother" many kids wish they could have, is shown solving a number of his students' problems (and surprisingly easily at that), the movie effectively points out that there are certain issues that need to be addressed by higher authorities than a teacher, however impassioned, dedicated or outright great he may be.

All in all, I found Big Brother an enjoyable watch and very much appreciated that its makers look to have their hearts very much in the right place.  So why isn't my rating of it higher?  For one thing, it's not the most technically polished of films.  For another, it contains a number of improbable plot developments and twists that require quite a bit of suspension of disbelief to let pass.  Approach it with the appropriate attitude and level of expectation though, and this movie will deliver drama, action, laughs and heartening messages of hope.