Plenty of good beers to sample at Beertopia 2018! 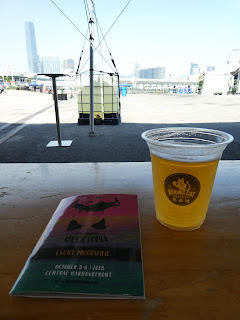 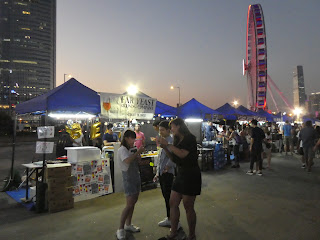 Still standing and imbibing after several hours at the craft beer fest! 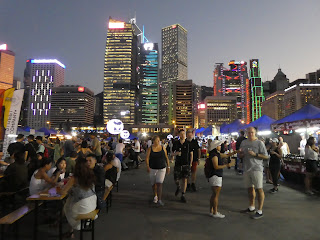 A far busier scene at the same event come evening!

It was sunny and hot when I got to the Central Harbourfront shortly after 12pm, the official start time of day 2 of this year's edition of the now annual Beertopia craft beer fest.  The crowd was on the thin side but I didn't mind -- and, to be honest, preferred it that way as I'm one of those people who actually likes to drink in quiet, mellow surroundings rather than feel a need for there to be a party atmosphere to get me in the mood!

Upon walking around and surveying the scene, I was pleased too to note that three out of the four breweries whose offerings I was looking forward to imbibe had them on tap rather than just bottles or cans.  On a related note: while there appeared to be fewer beer booths about the place this year than last year, a greater percentage of them seemed to have draft beers on offer this year.  On a probably not unrelated note, I also liked a higher percentage of the beers I tried at Beertopia 2018 over the previous year's.

I already was on my second 6 ounce glass (actually, plastic cup) of beer when two friends joined me for some beer imbibing of their own.  Soon after two other friends also came over for Beertopia, things got rather crazy after our party was gifted with more than HK$500 worth of extra beer coupons by an organizer pal!

By the time I decided to call it a day several hours later, I had enjoyed ales from: Shanghai's Boxing Cat Brewery, whose very reliable Contender XPA was what I chose to begin the imbibing with; Japan's Far Yeast Brewing Company, whose Tokyo IPA was deliciously crisp yet also smooth; Brooklyn Brewery, whose Defender IPA as well as Brooklyn East IPA are both very drinkable; Edinburgh Beer Factory, whose brown ale proved to be a pleasant surprise; and Belgium's Vedett, whose Extra Ordinary IPA actually lived up to its name!  I also tasted but didn't care for brews by Chicago's Goose Island Brewery, Lebanon's 961 Beer, Germany's Zoller Hof and Hong Kong-New Zealand collaboration Seven Brews.

With lots of coupons still to use up after all that, I ended up getting nine bottles of beer to take away and share with friends (except for the Samuel Smith Imperial Stout, which I plan to drink all by myself one cold winter's day!).  One added thrill of the day came from meeting Brooklyn Brewery's brewmaster, Garrett Oliver, and telling him that I began drinking his beers in the late 1990s in Philadelphia and was happy to find that they're now available in Hong Kong too!

And for those who wonder: no, I did not have a hangover this morning.  Yes, I did drink quite a bit of beer yesterday but I also made sure to drink a good amount of water throughout the day and make sure that I lined my stomach with food.  Also, it may come as a shock to some people but I actually tend to sip my beer -- as opposed to chug it -- so as to be better able to taste it.  In addition, I actually don't like getting drunk because, among other things, I really don't like feeling nauseous or that the whole world around me is spinning like mad afterwards! ;D
Posted by YTSL at 4:46 PM

Yes, whatever drink it is, good drinks are for sipping, preferably with good food or snacks. One bad hang-over after a double caipirinha back in 1998 was more than enough for me.

I "needed" more hangovers than you to learn my lesson but I reckon the lesson has been well learnt! ;b