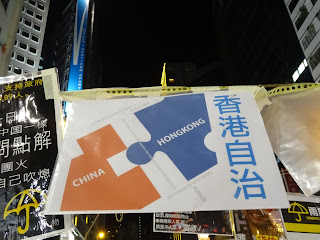 Hong Kong-China relations, as depicted in a poster hanging in
the "Occupied" section of Causeway Bay in November 2014


A few hours before I started writing this entry, news broke of Taiwan having elected its first female president in Tsai Ing Wen.  How dearly many Hong Kongers wish that they, too, could vote in a democratic elections for their chief executive.  Instead, that possibility seems ever diminishing -- and Communist China's influence and power over Hong Kong ever increasing.  Consequently, many Hong Kongers are having nightmarish visions of Hong Kong becoming the kind of place that they so want it to not be, as soon as just 10 years from now.


Made and released in 2015, Ten Years is a thought-provoking omnibus of five short films which premiered at last year's Hong Kong Asian Film Festival.  Given a limited release in just one cinema (Broadway Cinematheque) on December 17th, this low-budget indie production went on to outperform Star Wars: The Force Awakens at that venue and is now screening in a few other cinemas.  It also has caused quite a stir, particularly among the more political conscious and restless members of Hong Kong society, due to the often disturbing visions that its makers have offered up of Hong Kong circa 2025.

In Kwok Zune's intriguing Extras, Triad-like local officials, a former senior police officer and Mainland Chinese government representatives cook up an assassination plot aimed at facilitating the passing of national security legislation in the form of Article 23 of the Basic Law.  The two Triad underlings who are this short film's (anti-)heroes -- one of them a Hong Kong-born ethnic Indian (portrayed by Peter Chan Bei Tak), the other a working stiff from the mainland who came over to Hong Kong seeking a better economic future (played by Courtney Wu) -- are in way over their heads, and suffer accordingly.

The most slow-moving and consciously "artsy" of Ten Years' quintet of short films, Wong Fei Pang's Seasons of the End revolves around a couple (Lau Ho Chi and Wong Ching) who perform something akin to salvage archaeology on homes and lives presumably destroyed by the authorities.  Claustrophobic and "science fiction-y" in feel, it's the weakest -- and hardest to sit through -- by far of the five films; and it sure doesn't help that its setting doesn't come across as specifically Hong Kong, nor that its method of communicating its message tends towards the indirect, elliptical and abstract.

Things get considerably clearer and better with Jevons Au's Dialect, which tells the troubling tale of a Cantonese-speaking taxi driver (Lau Si Ho) finding it increasingly hard to make a living because of his lack of Putonghua proficiency.  Already in Hong Kong in 2015-2016, it sometimes feels like the place has been over-run by Putonghua speakers.  But worse is to come just one decade on for those who consider Cantonese to be an integral part of their individual, family and societal identity, as imagined by this short film's director -- who himself has (already) experienced the "creep" of Putonghua with regards to his own life and circumstances.

Arguably the most inflammatory and powerful of this short film omnibus's five works, Chow Kwun Kwai's Self-Immolator is a documentary-style offering about a pro-independence activist convicted of sedition who dies in prison from a hunger strike at the age of 21 (She Remembers, He Forgets's charismatic Ng Siu Hin), and the acts of protest he inspires, include a self-immolation in front of the British Consulate-General's office on Supreme Court Road.  A moving piece that feels all too real, it's scarily easy to imagine how some Hong Kongers will see the kind of actions taken in this film to be the only, or most, viable ones they have come 2025, if not before.

Seemingly saving the best for last, Ng Ka Leung's Local Egg is surprisingly low-key, given that its main character is essayed by the regularly over-acting Liu Kai Chi.  Giving an unexpectedly emotionally dialed-down but actually effective performance as an eggseller whose young son (Hui Yuk Ming) is a member of a Red Guards-like group, Liu's character is at the center of the sole story in this omnibus that gives its audience hope that not all will have been lost in and for Hong Kong come 2025 -- which now is less than ten years away.

Hi YTSL -- Thanks for the review! I hope Ten Years gains enough momentum to be shown abroad so that people outside of Hong Kong can see how we feel about our future...

Hope you've seen this film -- and if you do, hope you catch the film in cinemas before its theatrical run ends. It's a very local-feeling film. I'm not sure if many people abroad will "get" it when they watch it. Honestly, I even doubt that a lot of expats in Hong Kong who stay in their own national ghettos will "get" it -- but it sure would be good if they did/do!