A wonderfully scenic train journey between Nagoya and Takayama (Photo-essay)

I love riding on trains -- especially those where one gets to view the world going by along the way.  This is something I get to do a lot whenever I'm in Japan; with the added bonus of Japanese train passengers tending to be on the quiet and generally well-behaved side, and talking on mobile phones still being frowned upon in the Land of the Rising Sun (unlike in too many other parts of the world).

As a matter of fact, I'd go so far as to say that I often find myself enjoying train journeys as much as the time spent at the destinations they take me!  And if you're this way inclined too, chances are high that you will love travelling on the Hida Limited Express train service between Nagoya and Takayama (aka Hida Takayama) the way that I did.

Also known as the "Wide View Hida", the train's carriages have extra large windows that allows one great views of the scenic countryside one passes through, especially the leg of the journey between Mino-Ota and Takayama.  I spent pretty much all of the two and a half hour journey from Nagoya to Takayama looking out of the window (and yes, I made sure to get a window seat for this particular train ride) and did the same again on the journey back to Nagoya from Takayama five days later.  And after seeing the following photo-essay, I trust that you'll understand why this was the case... 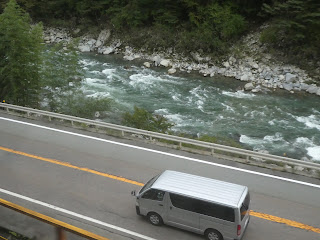 Sometimes, there's a road between the train track and the often
fast moving Hidagawa (Hida River); other times not! 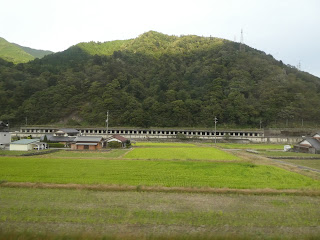 The train travels through several tunnels burrowed through hills
and mountains, and so do the cars travelling along the road
connecting the mountainous Hida region to the neighboring lowlands 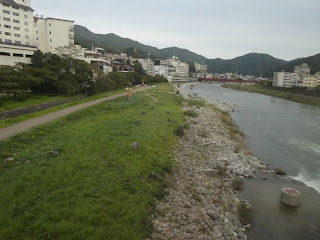 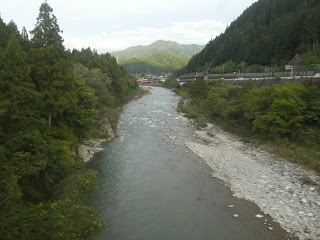 Even on a gray day, I found the passing views often stunning! 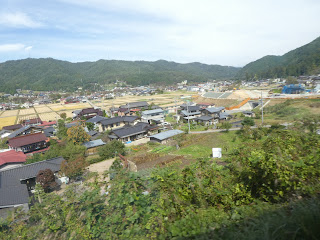 On the return trip, the sun was out and really brightened things up! 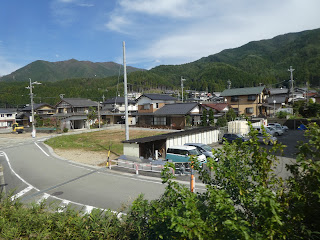 Many of the towns the train passed by seemed like model communities
-- and I sure do hope that's indeed the case :) 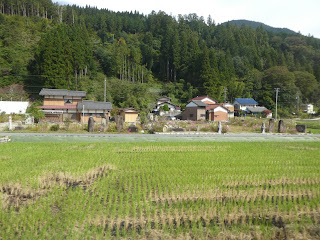 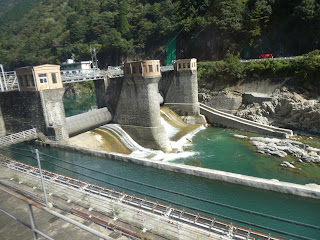 One of a number of dams along the Hidagawa that's been
rather fancifully described as the Rhine of Japan :)
Posted by YTSL at 11:16 PM

So what made you revisit Takayama, aside from the excursion to Furukawa?

This looks like such a good journey, thank you so much for sharing.


I love onsen too and Gero onsen looked delightful (but have a tattoo so I'm not sure how well I'll be received at an onsen not frequented with a lot of foreigners. The whole town looked similar to Beitou in Taiwan where I had wonderful times at the onsen- tattoo was not a problem there.

Actually, this was my first time in Takayama! I've long wanted to go there (with your posts helping me feel that way) but ended up not visiting that part of Japan until earlier this month!

Thanks for continuing to check out my blog posts, including this one!

Re tattoos and onsen access: I've been told that if your tattoo is small, you can put a sticker over it and that usually works for most onsen. Another option is to get access to a private bath: at one ryokan I stayed in, my group had use of a private bath attached to the room; at another, you could book a time to use a bath separately from others. Have also read that more than 500 onsen in Japan now allow people with tattoos to use their public baths. So you can always check to see if there are ones at Gero Onsen that are that way if you are thinking seriously of going there! :)