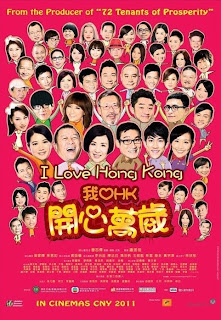 Before anything else, here's wishing this blog's readers -- especially the old faithfuls among you ;b -- kung hei fat choi and happy new year -- since today is indeed the first day of the new lunar year of the rabbit! And lest anyone wonder: yes, this Hong Kong filmophile has managed to get the new year off to a festive and fun start by taking in two enjoyable Chinese New Year movies (Mr. and Mrs. Incredible, followed by I Love Hong Kong) earlier today with large -- and largely appreciative -- audiences.

Additionally, although it's very early in the year still, I'm going to stick my neck out and predict that I Love Hong Kong is going to be a commercial success along the lines of 72 Tenants of Prosperity, Eric Tsang's Chinese New Year offering from last year -- or, at the very least, emerge tops of the Chinese New Year box office charts over a competitive pack that includes yet another installment of the All's Well, Ends Well series and Hollywood offerings such as The Green Hornet (with Jay Chou as Kato) and Category I-rated Yogi Bear and Tangled. (Oh, and Shaolin and Let the Bullets Fly remain in cinemas, and consequently in the frame, too!)

An archetypal Chinese New Year movie in that it mixes together guffaw-inducing comedy, feel good vibes, touching moments that brings tears to people's eyes and star power galore (complete with boasts of its having a cast of 198 stars!), I Love Hong Kong is also essentially a buddy movie revolving around two men who grew up in a public housing estate and, decades after moving out of their modest homes, return to the old neighborhood and, in the process, rediscover the ties that bind them to each other but also the community at large.

After his business goes bust (due to the world economic downturn that caused various clients of his, particularly in the US, to cancel their orders), Ng Shun (Tony Leung Kar Fai), his wife (Sandra Ng) and three children (Aarif Rahman, Mag Lam and Clorinda Chan) move into his old family apartment which now officially has only one tenant in the form of his bone-setter father (Stanley Fung). Although this results in a living situation that is on the cramped side, his understanding wife is moved to observe that maybe their changed circumstances might have a silver lining in terms of bringing the family closer together. And while there is some initial wailing about how little room there is for their stuff (not to mention private space within the place for each individual), the family does seem to quite quickly adept to their new situation and make the best of it.

Of course, this is not to say that this latest phase of their life is not all smooth going. Sandra Ng's character, in particular, encounters problems when out shopping in the housing estate's market and out at the workplace she returns to, only to find that a former underling has become the boss from hell. (But rather than portray these aspects of the story in a dramatic way, they get played for laughs; a good deal of which come out of the multifaceted star actress showing that she remains very game to do whatever it takes to get people rolling in the aisles.) In addition, some angst -- and further physical comedy -- comes out of it turning out to be the case that Ng Shun's old flame, So Ching, (Anita Yuen), also had recently moved back to the old housing estate.

As it so happens, however, the most dramatic development for Ng Shun turns out to not be re-encountering So Ching but, rather, the return of another integral link to his past to the scene. Years ago, Lung (Eric Tsang as an adult; Wong Cho Nam as a youth) had left the neighborhood in a way that had caused Ng Shun (played as a youth by Bosco Lam) to regret their having been best buddies. But now Lung appears to have returned with nothing but good cheer and intentions... and, in his own way, proceeds to help Ng Shun and his family strengthen their ties to their new/old community.

A film clearly designed to appeal to a wide age range, I Love Hong Kong has a nostalgic streak that those who remember the good old days will appreciate but also contains topical commentary and jokes galore of the kind that shows that it clearly is aware of contemporary concerns (and, also, that its filmmakers have a welcome bite and cutting edge to them. In particular, I loved the barbs it threw in the direction of Cafe de Coral and Link REIT.). In any case, it unquestionably is a very Hong Kong movie-- both in content as well as form -- and I have to say that I love it all the more for being so!

Hi YTSL! Kung Hei Fat Choi! Here's hoping that this Year of the Rabbit is full of all the good things in life. :)

Thanks for the review. It's my good fortune that this, as well as All's Well Ends Well, is playing at the 4 Star in San Francisco this weekend. Your review was just the push I needed to make the somewhat lengthy trip to go see it. ;)

I just watched "Bruce Lee My Brother" and agree with you, it was pretty good.

Have you ever done a review for Chen Kaige's "Wu Ji" (The Promise)...I just saw it, and was astonished at the bad reception it got...I kinda liked it. I think maybe it was misunderstood. (And the US version on Netflix was horribly shortened.)

I hope you get to see "I Love Hong Kong" and think you'll laugh at the part Wayne Lai plays in it. Also, am happy you got to watch "Bruce Lee My Brother" and agreed that it's pretty good. :)

Re "The Promise": no, I haven't reviewed it -- and actually have steered clear of it. To be honest, I'm not a fan of Chen Kaige's work -- and I was really put off by "The Promise" after seeing an extended trailer of it that featured a scene in which Cecilia Cheung acted/looked more like a kite than a human should! ;S

Happy Chinese New Year of the rabbit -- and hope it is one that's full of good (Hong Kong) movies for us to enjoy. :)