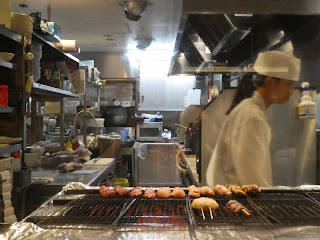 Enticing sticks of yakitori being grilled before me at Tetsuemon! 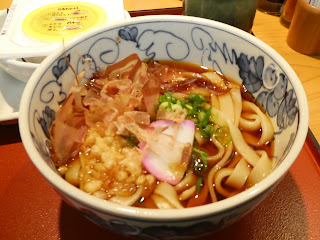 The bowl of kishimen that was part of my hearty as well as
super economical breakfast set at Ekikamakishimen
On the flight to Nagoya that I took a fortnight ago now, I viewed a documentary about ramen and its often surprisingly serious and deep-thinking purveyors.  More so even than Tampopo or The God of Ramen, Ramen Heads had me seriously hankering to eat a bowl of ramen.  So after I got in Nagoya, I went to a restaurant and ordered myself a bowl of ramen which came with -- and in retrospect, I think this says much about Japan's fourth largest city -- slices of chicken rather than the usual pork.  Feeling ravenous after the day's travels, I also ordered a couple of sticks of yakitori (grilled chicken) -- and upon eating them, got to marvelling at how truly tasty they were.
Figuring that what I had been eating was Nagoya's famed Cochin chicken, I decided that I definitely wanted to have more of this bird whose various parts, not just flesh, tastes way juicier than regular chicken -- and that I wanted to eat it at a Nagoya chicken specialist.  So, for dinner the next day, I went to Tetsuemon, a chicken specialist that does yakitori (though sadly not bonjiri nor misaki) but also dishes such as chicken liver sashimi and chicken skin with ponzu sauce -- both of which I happily ordered and devoured!
I enjoyed dinner at Tetsuemon so much that I actually ended up going there twice during my visit.  I must admit that one big reason for this was that it serves the sake with the French name of Eau du Desir (and Japanese name of Kamoshibito) that I first tasted some years back at Sasagin (and wish was as easy to find in Hong Kong as its native Aichi prefecture).  But, in all honesty, the chicken really was pretty good there too.  In addition, this chicken specialist also was where I discovered Nagoya miso and how absolutely fantastic it is when slathered over skewers of grilled eggplant (aubergine) or deep fried, breaded chicken!
If I had more time in Nagoya, I would eat eel there more than once too.  As it was, I treasure my memories of eating unagi (freshwater eel) hitsumabushi at Nagoya unagi specialists Maruya Honten.  Having tried eel several ways now, I will say that the usual method of eating unagi just with white rice is pretty good but it can be nice to be able to freshen things up by adding the likes of slices of seaweed, negi and shisho to the classic combo, and that adding dashi to the mix can make for a dish that's like a luxurious chazuke.  And while I normally prefer anago to unagi, especially at sushi-ya, I might well change my mind if I had regular access to Nagoya unagi: it really did taste that good!

With so many specialty Nagoya foods to try and so little time allocated there, I had to give quite a few a miss.  On the final day of my recent Japan trip though, I had kishimen for breakfast in a bargain 600 Yen set that also included a bowl of rice to be eaten with natto (which I happen to like a lot), and a glass of green tea.  If truth be told, I was less excited by this Nagoya dish that I had at Ekikakishimen than the others I tried -- thinking that it's pretty much just fettucine-shaped udon.  Add some miso broth to turn it into misonikomi though and I think you'd get a dish that definitely was more special -- but for some reason, its makers tend to go for udon rather than kishimen instead despite being from Nagoya like the creators of kishimen! :O
Posted by YTSL at 10:57 PM

My mouth is watering.
Coffee is on

My sympathies -- but thanks for being able to imagine how wonderful the food in Nagoya is from my photos and words. :)

Tetsuemon and Maruya Honten look like good picks! How was the liver sashi?

The chicken liver sashimi was lovely -- and preferable to chicken meat sashimi (which I've had previously in Japan, though not in Nagoya). I've actually had that dish before at the Hong Kong branch of Toritama. It was delicious there but so much more expensive. It can be painful to compare prices at Japanese restaurants in Hong Kong vis a vis those in Japan itself! ;S