Getting close to sake heaven once more at Sasagin! 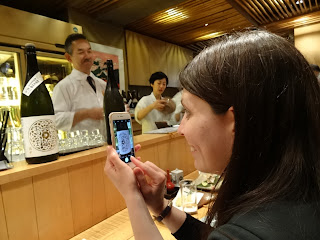 You know you're in for a special night when
Sasagin's Narita-san pulls out a bottle of sake
called Glorious Mount Fuji for you to try! 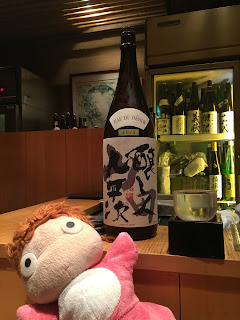 Puppet Ponyo swooning next to another
fantastic sake -- this one called Eau du Désir! 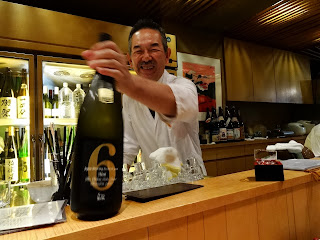 Six may be a conservative number with regards to the different
sake that man introduced me to that one evening... ;b

The last time I visited Tokyo before my most recent Japan trip, a friend who now resides in Hong Kong but had previously lived in the Japanese capital city recommended that I spend an evening at her favorite sake bar there.  Thanks to her suggestion, another friend -- who has lived in Tokyo for over a decade now -- and I had an evening to remember at Sasagin.  So it was pretty much a no-brainer that this Yoyogi-Uehara izakaya would be where we would meet up again for what would be a pretty much guaranteed fun night out.

On the evening of our appointed meetup, I made my way to Sasagin on my own; hoping that I'd remember the way to it despite only having been there once before, close to four years ago.  Despite our having drank quite a bit that evening in 2012, I found that I did indeed remember a lot about the place (and occasion); with my memory of how the exterior of the bar looked being actually pretty accurate, and with the added bonus this time being that I knew the large cedar ball hanging above its doorway denoted that it was a sake establishment.

Thanks to the large amount of time I've spent in the years since at Sake Bar Ginn (a sake bar here in Hong Kong which I probably would never have thought to check out if not for that night at Sasagin that really started it all!), I could recognize some of the names on Sasagin's sake menu.  And I think that my choice of a Dassai 23 junmai daiginjo to start off the evening along with my telling the bar's affable owner who had recommended his bar to me had a bearing on how the evening ended up unfolding!

After my American friend joined me at the bar and spoke to him in fluent Japanese, Narita-san (Sasagin's owner)'s beams got even broader.  And when we placed orders for such as eihire yaki (grilled stingray fins), and seasonal sashimi (raw seafood) and tsukemono (Japanese pickles), I got the feeling that he decided there and then that we were in the right place.

Early on, I noticed that my friend and I were the only non-Japanese at Sasagin that evening.  I also got to realizing that quite a few folks there found us quite fascinating -- and, in the case of the woman sitting next to my friend, enough to overcome her reticence to start chatting at length with us (on a range of topics, including the considerable amount of time that -- it turned out -- all of us had spent in the US, different places and ways to find friends these days, the difficulty of speaking keigo, and the amazing as well as amusing pear fairy known as Funassyi)!

Maybe it was because we had been befriended by regulars. (Among other things, the woman told us that she and her companion go to Sasagin weekly.)  Perhaps it was because we were so obviously enjoying ourselves, the food and the drink.  But after our second round of sake orders, Narita-san started pulling out pretty obviously premium bottles of nihonshu and pouring us drinks from them.

I have to admit that I actually can't remember the names of all the different nihonshu I sampled that evening (though I can definitely state that the revelatory standouts for me were the Glorious Mount Fuji (Eiko Fuji) sake from the Eiko Fuji Brewery in Yamagata prefecture, and the Eau du Désir (Water of Hope) from the Banjo Sake Brewing Company in Aichi prefecture).  Neither do I actually know how many glasses of sake I had that night.  But what I do know though is that my friend and I ended up closing down the bar -- and for the record, the only other bar I've ever done this to/at is Sake Bar Ginn!

I also remember experiencing some trepidation at how large our bill would be when the time finally came for us to be shown it.  In all honesty though, the total damage was far less than I feared that it would be -- considering not only how much my friend and I had drank (and eaten; we also ordered a plate of tempura moriawase that included delicious pieces of frittered anago (fresh water eel) along with the more usual suspects such as shrimp, sweet potato and onion later in the evening) but also the sheer quality of the sake that Narita-san had included in what had amounted to a nihonshu omakase event!

Before this second visit to Sasagin, I did wonder how much I'd enjoy it.  For one thing, my memory of that first visit was so wonderful that even I got to suspecting that the years had made my recollections more rose-colored than the reality actually had been.  For another, I've drank hundreds more liters of sake -- and tried a whole lot of different brands of nihonshu -- since that 2012 evening that effectively amounted to my real, serious introduction to sake.

In all honesty though, I ended up having a better, even more epic time this time around!  And yes, I found myself ruing once more that I don't live way closer to Sasagin (which, more than by the way, is in the Tokyo edition of the Michelin guide) -- though at least now I can console myself with the knowledge that I at least don't live too far away from Sake Bar Ginn! ;S
Posted by YTSL at 9:39 PM

Sounds like a wonderful evening. Love the photo of Puppet Ponyo.......she looks either very excited or ready to pass out....and since I have been out with your friend you might guess what I think....hehehe Very enjoyable blog entry!

It was a wonderful evening... and re Puppet Ponyo: yeah, I think she was ready to pass out from having inhaled all those alcoholic fumes... (Remember: she's just a kid, so did not drink!) ;b