Speaking out for my Muslim friends 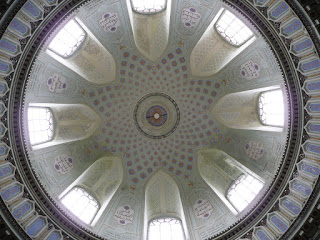 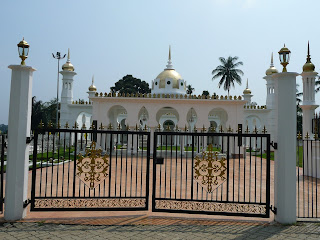 A quiet section of Kuala Kangsar's Ubudiah Mosque
On this day 74 years ago, the Japanese attacked Hong Kong and a whole lot of other places, including Pearl Harbor (over on the other side of the International Date Line; hence it still being December 7 over in the US when the attacks occured).  Unlike my grandparents and parents (one of whom was born in Japanese-occupied Penang), however, I've never personally lived in times when Japan was at war -- and feel blessed that this is the case.
Although I've never personally experienced living when a world war was taking place (and sincerely hope that I never will), I've lived in one country that has been at war when I was resident there.  The country in question is the USA -- and it's notable that each time they waged a war when I was there, the enemy was identified as Muslim.
Despite not being a Muslim myself, I found myself being called upon to explain -- and felt compelled to defend -- Islam and people of the Muslim faith on several occasions when living in the US, especially after September 11, 2001.  This was on account of my hailing from a country whose official religion is Islam (as well as where religious freedom is enshrined in the constitution), about the only thing some Americans I met seemed to know about Malaysia (and frankly, I'm amazed that they even knew that!).
I still vividly recall a heated argument I had in a Philadelphia bar with an American acquaintance who refused to believe that I could be a Malaysian and yet not Muslim.  When I told him that not only was this the truth but that I had attended a Convent school in Penang (run by the government) whose headmistress was an Irish nun, he actually got angry with me and said that this was all impossible; this because his view of Islam and Muslims (none of whom he had ever met) was that they were intolerant extremists -- something that I was moved to conclude that he was more like than the people he wholesale accused of being the case!
As might be expected of someone who grew up in a majority Muslim country, I have had friends who are Muslim for much of my life.  Actually, I don't only have Muslim Malaysian friends but I also have had Muslim friends over the years from Singapore, Tanzania (where I lived for a time with a Muslim family with whom I shared many meals, laughs and fun moments, and, at other times, with an American-Zanzibari Muslim couple, and rent-free for a few months in the house of a Muslim friend when he was out of town), Eritrea, Mali, Turkey, England, and also the USA.
In the case of the last: one of my Muslim American friends is the kind of person -- Caucasian, born in the Midwest, and going by the Christian-sounding name he was given at birth -- that doesn't fit the Muslim stereotype that the narrow-minded likes of Donald Trump have.  Actually, none of my friends would fit the image of Muslims that Donald Trump has -- for otherwise, he surely would have no reason to fear or hate Muslims so much that he'd advocate banning all Muslims from entering his country!

One of the reasons why I felt compelled to blog about this is to register my shock and horror that a supposedly serious American presidential hopeful could be so idiotic as well as  prejudiced.  I also want to do my bit to point out that not all Muslims are violent, horrible people -- and that, in fact, the majority of those I have known in my life are actually pretty nice folks who one would feel privileged to call "friend".
In addition, I remember the following words by German pastor Martin Niemöller, who spent the last seven years of Nazi rule in concentration camps, and don't want what befell the likes of him to happen in my lifetime:-

First they came for the Socialists, and I did not speak out—
Because I was not a Socialist.

Then they came for the Jews, and I did not speak out—
Because I was not a Jew.

Then they came for me—and there was no one left to speak for me.
Posted by YTSL at 11:03 PM

Thank you for this. I have been deeply, deeply disturbed by the anti-Islam rhetoric that has been going on in the US. It can be overwhelming. It's important to speak out about this, and your reminds me that I should consider finding more ways to do so.

It is really difficult as an American living overseas to discuss what is going on in the campaign for US President right now. I am mortified and embarrassed by it, and terrified to think of the atmosphere that I will be returning to in the near future. Because it isn't just the candidates, it is the people that support them and enable their extreme reactionary ideas that are so worrisome, especially when some of those supporters are close family members.

This is certainly a timely photo-essay. I've never known Muslims personally. However, on trips to Singapore, Malaysia and one excursion to northern Sumatra, I did talk with Muslims. But it was the Muslim women who impressed me more than the men, because they were some of the most courteous and compassionate people I've ever talked to. I have the feeling that it is the women of this religion who will play a more prominent role in communicating to the world the positive, non-violent aspects of this religion.

I thought the anti-Muslim feeling in the US was bad in the last few years that I lived there but I fear that it's actualy become worse. I do hope that Americans like you will speak out against it and thank you for your willingness to do so.

Are you returning to the US (permanently) in the near future?? If you are, I'll at least take some comfort in knowing that you'll increase the ranks of Americans living there who are are more open to the rest of the world.

I wonder whether you have known some Muslims without realizing that they were/are Muslims. Like I wrote in my post: in the US, especially, there are quite a few Muslims who don't have obviously Muslim names, etc. In any case, it does sound that over the course of your travels in Singapore, Malaysia and Indonesia, you did interact with Muslims -- and I think it'd be safe to assume that the interactions were okay ones.

For my part, I've met and know nice, non-violent Muslim men as well as women. And for what it's worth, we hardly ever discussed religion or violence. Rather, we're more likely to talk about food, soccer, cars (actually, it's more like one of my Muslim male friends would go on and on about them while I listened!), movies, hiking, who was going out with whom -- you know, regular stuff! ;b

Hi!
I can't really keep up with everything you blog about, but this certainly caught my eye!
I am so glad that you addressed the issue and shared your experiences.
With the influx of refugees and immigrants to Europe since this summer especially, the mood has turned from compassion and a willingness help, to growing xenophobia and racism. Also in Norway even though we have not seen the largest amount of people coming. It is a shame what is happening on so many levels....
Tone

Yes YTSL, headed back to the US soon after I finish my current work contract. At some point I realized that I was not enjoying my time here enough to make it worth being so far from family and longtime friends. The crowds, the heat, my inability to truly master the language--all things people warned me about--have started to annoy me more often than not. I am hoping to leave while I still love and appreciate Hong Kong.

I think I have always been more open-minded than many Americans. As someone whose grandparents came to the US to make a better life for their families, I always found it hypocritical that so many Americans are biased against the newest incoming immigrants. And I believe every nationality/race has its good and bad people, with the majority being somewhere in between.

I can't say I know any Muslims, or even know much about their religion. But I can empathize with the ordinary Muslim in one important aspect. I always hated it when, upon learning I was of Italian descent, people would assume I had some connection to the Mafia. While this is not as awful as what many Muslims have been enduring, that assumption makes me uncomfortable enough that I try not to make assumptions like that about other groups of people.

How often do you visit my blog? I blog pretty much daily and have seven posts on each page. So I figure that if you visit daily or once a week, the content quantity shouldn't be too overwhelming! ;b

More seriously though, thanks for commenting on this particular post. I think the refugee situation is terrible but even worse is what has caused it. I understand that people in the countries that the refugees have fled to fear for their quality of life but I hope that they will never stop recognizing that the refugees are human beings too.

Hi!
oh, but it is;) overwhelming, that is.
I must say that I always enjoy the entries that I find the time to read. I like it that you are so versatile in your interests and pursuits.
I am just at a time in my life where I have almost no time to myself and since I also have a lot of things I want to experience, read, watch, engage in.....it is what it is
Tone

Thanks for taking the time to check out (some of) my blog posts despite your being so short of time! Some people may think I'm too eclectic in terms of what I choose to cover -- but that's the beauty of having my own blog: I get to cover what I want on it, and decide how frequently to do so too! ;b