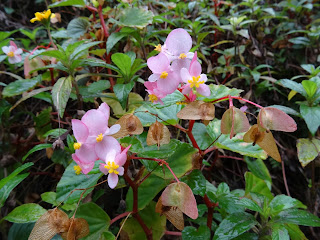 In sub-tropical Hong Kong, flowers continue to bloom in winter 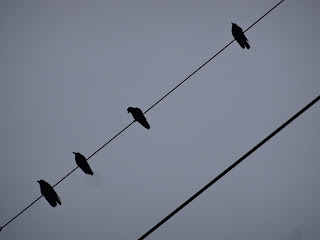 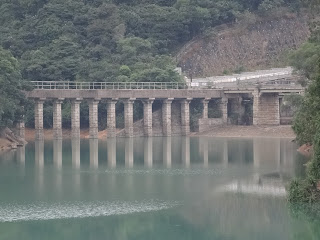 When the reservoir waters are low and calm,
cool reflections abound!
This afternoon, I went on yet one more hike in Tai Tam Country Park.  The most convenient of Hong Kong's country parks to get to (since its northern boundary is within walking distance of not just one but actually two MTR stations!), it also has a number of scenic sections along with hills from which one can get splendid views such as Violet Hill (with its three peaks), The Twins, Jardine's Lookout, Mount Butler and Siu Ma Shan.
One of my favorite of Hong Kong's country parks, each hike there yields what I have come to look upon as comfortingly familiar sights but also something new, or at least different -- be it a new critter or flower spotting, or yet one more section of trail to go on for the first time.  For example, this afternoon, I finally made my way to a pavilion up on a ridge that I had seen many times before but had taken a while to figure out how to get to!
Unlike the previous time that I had ventured into the largest country park on Hong Kong Island, I didn't spot any truly interesting critters -- which is to be expected now that winter's finally arrived in the Big Lychee this year.  But as an American friend who moved to Hong Kong only a few months ago has happily observed, one can see flowers blooming here in fall and winter rather than just spring and summer!
What with it being on the rainy side when I began today's hike, I opted against going up any of Tai Tam Country Park's higher hills.  Instead, after getting up to Quarry Gap (AKA Tai Fung Au, which means "Big Wind Gap" in Cantonese) from King's Road via Mount Parker Road, I walked down to the Tai Tam Reservoirs, which are pretty much guaranteed to offer up gorgeous scenery at just about any time of the year.
And so it proved, with the bonus of their low waters allowing more sections of such as the masonry bridges that are among the featured structures of the Tai Tam Waterworks Heritage Trail to show than usual, and the reservoirs' calm surfaces able to reflect quite a bit of the surrounding scenery. :)
Posted by YTSL at 11:41 PM

Thanks (for your visit, comments and appreciation), and happy new year to you too! :)