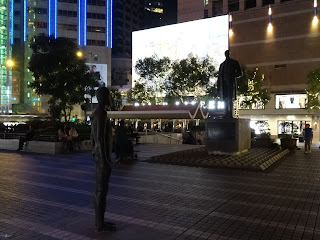 Thanks to Antony Gormley, Statue Square is home to more
than just one statue again -- at least until May 18th, 2016 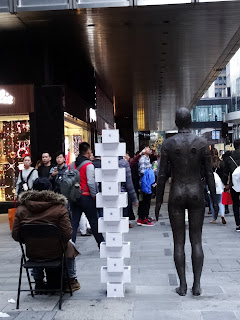 An iPhone seller positions his wares and himself
next to one of Antony Gormley's naked man sculptures
For over a month now, Hong Kong has played to host to Antony Gormley's Event Horizon, a public art installion consisting of 31 sculptures of naked, anatomically correct men erected (no pun intended!) on top of buildings and at street level across a one kilometer stretch in the heart of Hong Kong's Central District.
In the first few weeks after the art works were installed in Hong Kong, the police received several phone calls from members of the public who had mistaken the statues they had seen atop buildings as people contemplating suicide by jumping to their deaths.  But while there are some who may dismiss these reactions as a sign that Hong Kongers lack cultural sophistication, I actually sympathize with those individuals who mistook the statues for suicidal people -- and, if anything, question the cultural sensitivity of those who went ahead and brought this foreign art installation, probably at great financial expense, over to this part of the world.
In addition, for all of Antony Gormley's lofty views with regards to this particular art installation, I am inclined to think that his representations of naked men have not had the impact here in Hong Kong that he had sought.  For one thing, despite it being his stated intention being "to get the sculptures as visible as possible against the sky", I actually don't think that they're all that immediately visible.  In fact, despite my knowing of their existence, I still have failed to spot a single one of those statues located on the roofs of buildings!
And while I have noticed those of his statues installed at street level, I also have noticed that many of  the people passing by them haven't exactly been moved to "re-assess our own position in the world".  Rather, they've become something to merely gawk at or photograph, and provoke discussions like -- and, I swear, I really did hear this earlier today -- "That looks like a circumcised penis to me", "Are you sure?",  "Yes, absolutely"!" at best; or end up blending into the landscape and get plain ignored at best.
Even while I appreciate the efforts of those intent on bringing art to Hong Kong, I wonder whether they would do better -- and Hong Kong be better served -- if they were to work to encourage, cultivate and nurture the local artistic talent that does exist.  Either that or bring art that connects more and better with Hong Kongers rather than be so foreign that they actually alarm or, maybe worse, are met with apathy.
Posted by YTSL at 11:34 PM

HI YTSL -- Yeah I agree with you about this "exhibition"... I spotted one statue that was visible from my gym -- 18 floors up! And you had to see it from a certain angle otherwise it was hidden! Then the one on Queen's Road Central, the first time I saw him, someone put a scarf around his neck (it was cold that day!), the second time it was a condom...

Hahahaha re what people have been doing to the statue on Queen's Road Central!

I wonder whether Antony Gormley's visited Hong Kong and actually seen the locations where the statues have been placed. In any case, I think we can chalk this art project among those where the idea may have been good but the execution less so.

After reading this entry, you sound as if you aren't very impressed with Mr Gormley's work...After reading your CNN link and other online sights, I doubt if these sculptures are necessary at all. The artist says he wants to "liberate the buildings as shapes." Since these sculptures are molded after the artist's own body, the only thing "liberating" about them is that they liberate the artist's exhibitionistic narcissism. Also, there's something retro about this British import that might have worked better back in pre-handover days... Instead, why not display a sculpture of say, Fan Bingbing, dressed in dynasty garments from one of her movies. It would certainly be more aesthetically pleasing than this indulgent installation.

You're right that I'm not too impressed by Mr Gormley's work -- and do reckon that it's an unneccessary import from a former colonial power. I think though that a sculpture of Fan Bingbing in the middle of Hong Kong would truly raise heckles -- seeing as that might be read as the symbol of a contemporary colonial/imperial wanna-be seeking to (further) impose itself on the Hong Kong landscape!