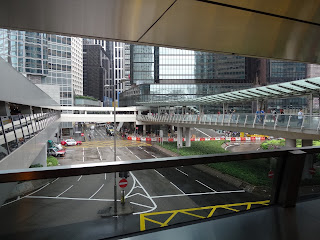 Do you reckon that you'd get lost in Hong Kong?


To business minded folks, this could be read as a statement about how minor a market Hong Kong (now) is considered to be for movies in general, and particularly those that are predominantly in Mandarin (like many a Mainland China-Hong Kong co-production these days as well as wholly Mainland Chinese productions).  These actions say a lot to me too about how far apart mainland China and Hong Kong are culturally, including in terms of cinematic tastes, these days.


But as Lost in Hong Kong actually reminds us, there was a time not so long ago when mainland Chinese cinemagoers were major fans of Hong Kong movies.  Back then, Hong Kong also was perceived by many a mainland Chinese person as a fabled land of opportunity and plenty, one which they dreamnt of moving to to work and live (like, say, the protagonists of Comrades, Almost a Love Story) -- rather than just a place to go for a shopping-filled vacation (like is the case these days).


Boasting a surprisingly rich use of old Hong Kong movie soundtracks (including more than one song sung by the late Leslie Cheung, such as the theme song for A Chinese Ghost Story) and visuals (such as hand-painted film posters along with old movie clips), not to mention guest appearances and cameos by Hong Kong film personalities, Lost in Hong Kong's story begins in 1995, with a university class attended by idealistic art student Xu Lai (Xu Zheng), pragmatic-thinking art student Yang Yi (Du Juan) and Cai Bo (Vicki Zhao Wei), a business student scouting for artists interested in working her family's lingerie business.


Xu Lai's clearly attracted to Yang Yi but something always gets in the way of his getting to kiss her for the first time (never mind anything else more serious).  And after she gets a scholarship to study in Hong Kong, he never sees or hears from her again -- until a couple of decades ago when she invites him to the opening of her latest art exhibition in Hong Kong.


Twenty-years on, Xu Lai's long traded his dreams of being an artist to become a bra designer in Cai Bo's family firm.  He's also now distinctly bald, and married to Cai Bo, who so desperately wants to become a mother that she now perceives sex primarily as a means to get pregnant rather than through romantic, rose-tinted lenses.  Still, Xu Lai dearly wishes to see Yang Yi again.  And as luck would have it, he will be in Hong Kong when her art exhibition opens -- only so will Cai Bo and the rest of her family, including her annoying aspiring filmmaker brother Lala (Bo Beier), who he had stupidly promised to allow to do an interview with!


As Xu Zheng and Bao Beier reprise their "stressed-off businessman trying desperately to shrug off a leech-like nitwit in exotic territory" schtick, the audience is treated to a wild tour of Hong Kong that takes in visits -- some shorter than others -- to such as as prostitute den, tattoo parlour and Triad territory along with a classy exhibition venue and deluxe quarters belonging to someone who's visibly "made it" in Hong Kong.  It may not be the Hong Kong that some visitors and residents will recognize from real life (cf. the comments in this blog post) but it won't be unfamiliar to long-time fans of Hong Kong cinema.


Perhaps because of this, watching Lost in Hong Kong actually made me feel nostalgic for 1980s and 1990s Hong Kong cinema -- as well as marvelling at how much of a Hong Kong cinema fan the mainland makers of this movie appear to be.  And even while this offering's principal characters are distinctively Mainland Chinese in personality, I'd even go as far as to suggest that this film -- and, for that matter, South Korea's Veteran -- may well possess more of the unbridled zaniness, wild energy and genre-transcending tendencies of 1980s and 1990s Hong Kong cinema than the vast majority of movies helmed by Hong Kong filmmakers thus far this year!

It was manic and crazy, but made me laugh.

I don't understand why it did so badly in the cinemas.

For some time, there are many Hong Kongers who refuse to give a film a chance if it's in Mandarin and predominantly associated with individuals from north of the Hong Kong-Mainland China border. Some people have (even) "read" "Lost in Hong Kong" as showing cultural colonialism of Hong Kong by Mainland Chinese -- though, honestly, I got the more good-for-Hong Kong message that this film's makers realize that Hong Kong is pretty different from Mainland China even while there was a time in the past when Mainlanders eagerly lapped up movies, etc. from Hong Kong.

Shame really, considering the film clearly shows the director's love of Hong Kong cinema. Nobody makes this type of films any more - even in Hong Kong.

I agree with you re it being a shame that few people saw this film in Hong Kong. But I think some people still do make this type of film -- if you mean wild and full of surprises. From this year's batch, check out South Korea's "Veteran", Tsui Hark's "The Taking of Tiger Mountain" and Matt Chow's "12 Golden Ducks", if you haven't already! ;b