A delicious taste of South Africa in Hong Kong! 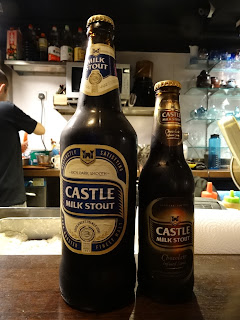 A beer I first drank some 20 years ago and the chocolate
infused version I tried for the first time earlier this week! 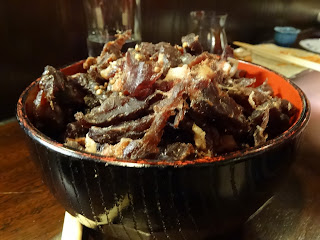 Anyone for some biltong? :b 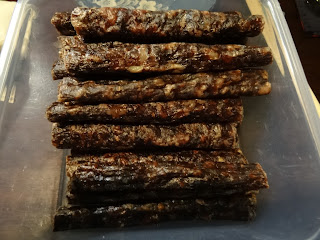 Droëwors, the tastiest hard sticks I've ever eaten! ;b


I have to admit it: there's been more than one occasion over the past few years when I've thought that Hong Kong's Asia World City claim was more of a joke than reality; this particularly since with each passing year, it seems like one encounters fewer and fewer Hong Kongers who seem all that comfortable and open to speaking a language that's not Chinese, and is more and more likely to find oneself in a part of Hong Kong with no English signage in sight (despite English (still) being one of the official languages of the HKSAR).

At other times though, there are things and events that prompt me to marvel and exult over how international and multicultural life in Hong Kong can be.  Take, as an example, the fact that not only do Japanese sake and cocktail bars exist here in the Big Lychee but that my most regular drinking buddy at them is a South African gentleman who spent time living and working in Germany and South Korea in between leaving his home country and moving to Hong Kong!


Early on in our friendship, I told him about how I had spent a couple of years in Africa (Tanzania, to be more precise) and that when I lived in Dar es Salaam, my favorite beer was South Africa's Castle Milk Stout.  So guess what my South African friend made the effort to get me on his most recent visit back home?  Why, a big bottle of the classic Castle Milk Stout, of course, but also a few extras besides!

A few evenings ago, we met up to share some of that fondly remembered South African beer.  Before he opened the bottle of Castle Milk Stout that had traveled several thousand miles over to Hong Kong, my friend expressed his fear that the beer wouldn't be as good as I remembered it being.  I told him I actually was prepared for this to be the case -- this not least since I first had sampled this milk stout before I had been introduced to the incredible world of imperial stouts -- but that I'd be happy and satisfied if it turned out to be half as good tasting as I had felt it was when I had first tried it!

Happily, my verdict after trying it again after all these years is that Castle Milk Stout really is a very tasty stout that's smooth, richly malty, and noticeably more complex and definitely superior to the much more famous stout brewed by Guiness.  And, as it so happens, it's great to drink when eating biltong and droëwors, traditional South African meat snacks which represent a beloved taste of home for my friend!

Far less traditional but no less great tasting was the chocolate infused Castle Milk Stout which my friend also brought over from South Africa.  Containing cocoa as well as the more usual ingredients (water, hops, yeast and malt) found in beers, it really does smell of chocolate and, perhaps even more amazingly, does have a chocolatey aftertaste that's surprising the first time around and entirely pleasant!

Not only was it a big hit with my South African friend (who actually had never had Castle Milk Stout before that evening as he's more of a wine, cocktail and sake than beer drinker!) and I but it went down well too with our Hong Kong and Japanese friends who also tried it that evening!  And I think I now won't be the only one hoping that he'll bring back some bottles of Castle Milk Stout -- both the original and chocolate-infused versions -- after his next visit home... ;b
Posted by YTSL at 11:40 PM

The South African biltong and droewors dishes look tasty. I have friends who make deer jerky every year (which we gobble up very quickly) and will pass the links for making these dishes which I think they may like.

I liked the biltong but LOVED the droewors. The latter's casing has a very interesting texture, one that might be described as crunchy and contrasting well with the sausage's more solid center. :b