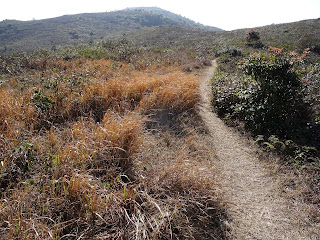 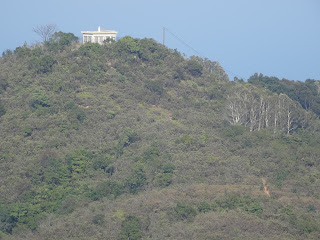 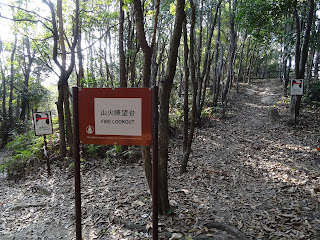 Signposted but not accessible to the public, it seems :(

On the sunny winter day that two friends and I went up the Sai Kung Peninsula's highest spur, we also had intended to go to the fire lookout at the top of nearby Lo Fu Kei Shek.  On paper, it shouldn't have been a problem.  For one thing, 255-meter-high Lo Fu Kei Shek is 226 meters lower than 481-meter-high Shek Uk Shan.  And in fact, we were approaching the lower hill from the higher one as we made our way down to Hoi Ha Road.

But as our party of three made our way through thick underbrush from Shek Uk Shan towards Lo Fu Kei Shek and beyond on one of those trails designated difficult, indistinct or seasonally overgrown on Hong Kong Countryside Maps, we got rather worn out from fighting our way through tall foliage and also making sure to tread carefully down an at times steeply descending path.  And after making it to Lo Fu Kei Shek, we found "road closed" signs indicating that the trail to the fire lookout on the map was no longer open to the public/considered safe to go along.

I must admit that part of me did want to go up to the fire lookout as, from experience, I know that the hilltops where these facilities are located offer up grand, panoramic vistas.  At the same time though, that knowledge was not enough to make me want to go along a road that had been declared closed for, I figured, a good reason.  Also, the road looked to be leading uphill quite a bit -- and at that point in the hike, I preferred to make for the nearest green minibus stop and, from there, a place where I could get something to eat and drink!

While having dinner an hour or so later, my friends and I reflected on our hike and decided it was a pretty good one, even if there had been a few hairy moments and we all had some scratches to show for it.  Thinking back to the grand views that we had on Shek Uk Shan and quite a few other points along the hike, we pronounced ourselves surprised that we hadn't seen any other hikers after we went past Cheung Sheung Plateau.

After getting home, I decided to research Shek Uk Shan and Lo Fu Kei Shek some more, and found a blog post telling of a young policeman's disappearance in the area (that's possibly related to this archived story) and a news story of a different hiker having died near Lo Fu Kei Shek.  It's possible that these incidents have warned off those hikers with long memories, superstitious inclinations or both from this part of Sai Kung West Country Park.  If so, I have to say that it's quite a pity as it's really a visually stunning area; one that's worth hiking through, in the company of others, along those sections of trail that are marked on the map and still accessible to the public.
Posted by YTSL at 11:48 PM