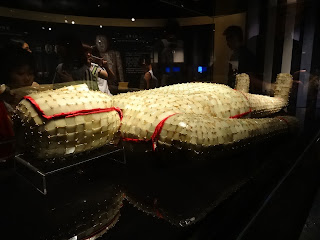 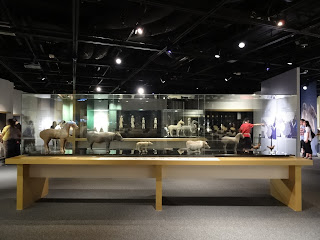 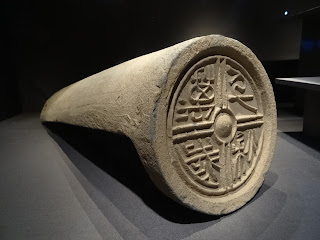 This tile-end from Changan dates back to around 190 BCE! :O


Along with the fiction books written by English author Enid Blyton, my favorite reading when I was a child included non-fiction in the form of volumes of Tell Me Why books, books from Ladybird's Learnabout series and issues of Look and Learn magazine.  And it was from one of the latter that I first learnt of the existence of burial suits made out of jade that encased the corpses of Han Dynasty aristocrats.


As morbid as it may sound, those jade burial suits and the mummies of ancient Egypt thoroughly fascinated me and played parts in my having dreams of becoming an archaeologist at one point in my life.  But although I saw mummies on exhibit at the British Museum at an early age, I only got up close to a Han Dynasty jade burial suit for the first time a few weeks ago at the Hong Kong Museum of History, courtesy of its special exhibition on consolidation and cultural exchange in the Han Dynasty.

Held to commemorate the 60th anniversary of the discovery of the Lei Cheng Uk Han tomb in Hong Kong, The Rise of the Celestial Empire exhibition has more than 160 Han Dynasty-era artefacts on display.  Bringing together items on loan from around 40 cultural institutions located in different parts of mainland China, it represents a rare opportunity to see these historical treasures -- a good bulk of which are over 2,000 years old -- in one place.

Interestingly, on the afternoon that I went to the history museum, there were far more visitors from the mainland than from Hong Kong or anywhere else checking out the exhibition.  I hope for their sake that the Chinese version of the exhibition text was a good deal better written than the dry, over-lengthy English language version.  Honestly, I wasn't able to get through the text on most of the introductory panels for a variety of sections of the exhibition.

Happily, however, many of the artefacts on exhibition -- including ceramic models of granary houses whose details included such as human figures going about their business, clay and wooden figurines of musicians, acrobats and other humans, and intricately designed gold imperial seals -- were interesting to look at on their own.  And when one adds their ancient age into the equation, the sight of these objects -- particularly the jade burial suit that resembled armor for the afterlife -- often filled me with awe.

The longest reigning of China's dynasties, the Han Dynasty gave its name to the ethnic group that make up the majority of the population of mainland China, Hong Kong, Taiwan, and Singapore.  All in all, it's amazing to think that 19% of the world's population have at least a nomenclature link with an imperial dynasty that was established back in 206 BCE, and came to an end in 220 CE (way before, say, the reign of Roman emperor Constantine the Great, who founded Constantinople)!
Posted by YTSL at 5:30 PM