On the way to the sixth stop on yesterday's boat tour which included time spent on the islands of Check Chau (aka Port Island), Ap Chau (aka Robinson Island) and Kat O (aka Crooked Island), I noticed that I had taken more than 60 photos at that stage in the excursion, and mentioned it to one of the group's members.  She ruefully told me that she had taken so many photos on her smartphone that its battery had run out of power!

Those two remarks should give a good idea how many cool and interesting sights we saw on the northeastern Hong Kong tour that also included visits to Wong Chuk Kok Tsui, Hung Shek Mun, Sam A Tsuen and Lai Chi Wo.  And for good measure, here's offering up 8 photos taken yesterday -- in addition to those I already put at the top of yesterday's blog post -- that I hope will drive home that point (even while I also grant that they'd have been better if there had been more sunshine when I took them!):- 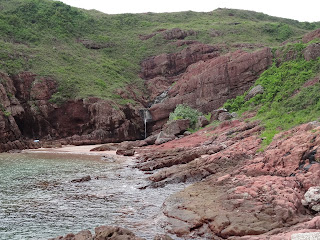 A view of Chek Chau from the sea, with a waterfall
as the surprise icing on the cake 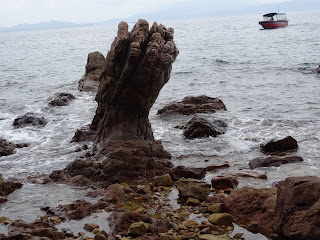 A Time Out article billed the "Devil's Fist" as the most
iconic of  Hong Kong's rocks rather than Lion Rock! :O 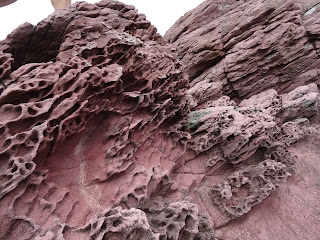 Not only can reddish rocks be found at Hung Shek Mun (Red Rock
Door/Passage) but some of them also are honeycomb shaped! 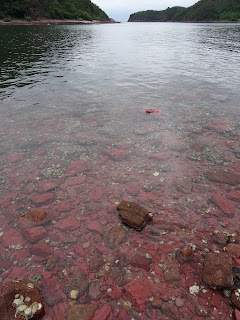 The clear, calm waters add to the area's beauty 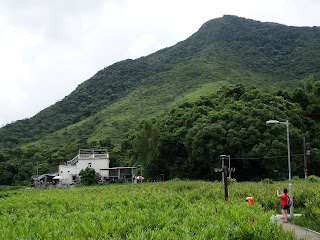 In this part of the world, the green and rural areas belong to
Hong Kong while the more built-up areas are in mainland China!
(click on the photo to enlarge and boggle your mind! ;b) 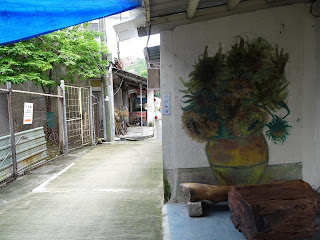 Someone on Kat O's a fan of Vincent van Gogh's Sunflowers ;) 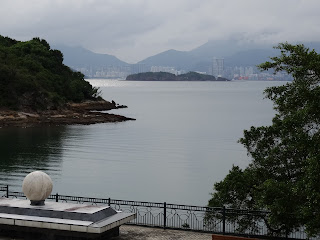 From the terrace in front of Kat O's Tin Hau temple,
one can see duck shaped Ap Chau, and Shenzhen's high rises
Posted by YTSL at 10:47 PM

This is really lovely. Thanks for sharing. How can I go on a boat tour of these places without having to hire a junk? Is late October a good time to do so? Would the seas be choppy then?
Sophia

Thanks for appreciating! I learnt of the boat tour via Explore Hong Kong, a meetup group whose organizer is a professional geo/eco guide. I think October would be a good time to do the boat tour -- it should be cooler, and dry too. As far as I can tell, we didn't venture into open sea, so I don't think the water would be all that choppy around the places we visited.

Thanks -- and yes, I did find the cultural aspects of these remote sections of Hong Kong interesting as well as its natural elements. :)

Fascinating photos that truly do intrigue this rock lover. Thanks for mentioning the meetup group, Explore Hong Kong. This is a tour that is obviously well worth taking.

When I first read about the tour, I thought it was a bit pricey. But considering the tour ran from around 9am to 5pm and we got to walk around -- not just view, from the boat -- interesting places, I'd say it was well worth it! :)